René Redzepi on the Explosive Dangers of Foraging, Eating Bugs, and His New Book

Share All sharing options for: René Redzepi on the Explosive Dangers of Foraging, Eating Bugs, and His New Book 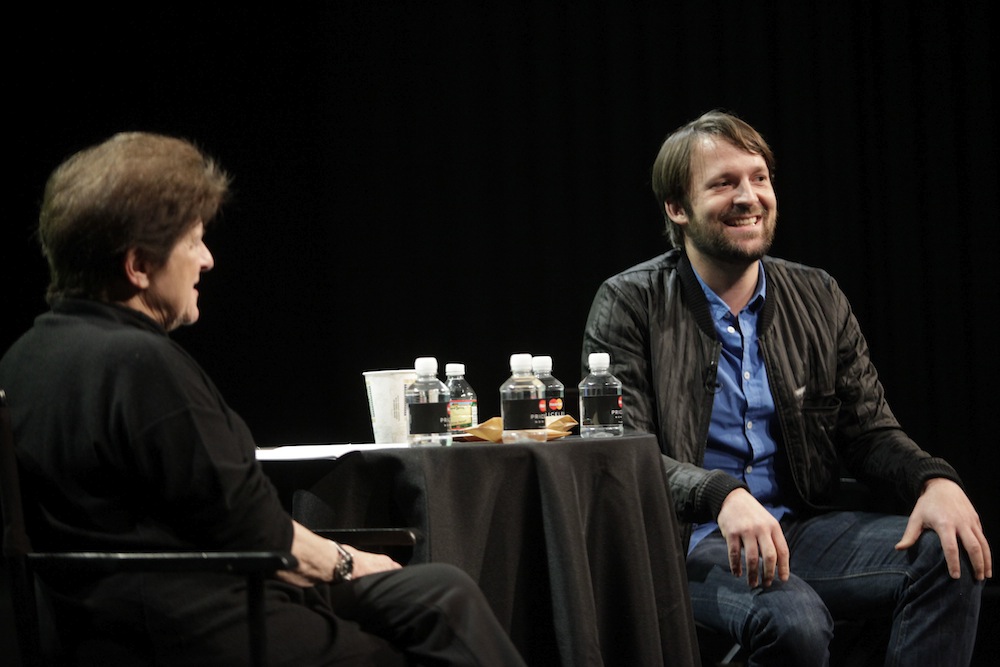 Last night, Noma chef René Redzepi took the stage at the New Yorker Festival, chatting with New Yorker staff writer Jane Kramer. He was asked to bring a clip from his favorite food movie, choosing a pair of scenes from Babette's Feast, and he brought samples of foraged food from his restaurant for the audience: rose hips, fermented and dried mushrooms, paste of wood ants, and a fish sauce-like brew made from "piles and piles of corpses of crickets."

Unsurprisingly, the conversation largely covered Redzepi's famed foraging and use of local Danish insects, but Kramer also got Redzepi to talk about a new book he's working on. Spoiler alert: it's about making lunches for your kids.

On Danish cuisine before Noma: "Back [when we opened], even Scandinavians thought there was no 'cuisine' in Scandinavia. There was just food to survive. And we opened the place thinking, 'Let's use more local ingredients,' something that's old as time. When we started, we simply just took existing recipes, existing ideas of food from other cultures, and put local ingredients in there. And we all thought that that would make it our own somehow."

On the evolution of Noma: "Within a few years, it stopped making sense, this 85-hour work week where you're constantly cooking somebody else's ideas or ways of looking at food. And that's when 'Time and Place' started and that became the core of everything we do now."

On Babette's Feast:: "We have this thing at the restaurant that we call Babette's Feast Syndrome. It's something we use to explain the lack of enthusiasm from our guests sometimes. It's not occurring so much anymore?now we're almost a decade in, and it's amazing what happens within a decade amongst the people of a region?but you feel it growing up in Scandinavia. That food, cooking, is not something that is not made to enrich life or to give you pleasure or to give conviviality. It is just mere sustenance. And that's a lousy attitude if you're trying to operate a restaurant with long meals."

On bugs: "I know it's taboo to eat bugs in the Western world, but why not, when it adds letters to your vocabulary? ... You go to Southeast Asia and this is a common thing. You read about it from all over the world, that people are eating bugs. Of course, we eat things from bugs as well. Most of it we don't know?a worm, a mushroom. If you like mushrooms, you've eaten so many worms you cannot imagine. But also we eat honey, and honey is the vomit of a bee. Actually it is. So think of that next time you pour it into your tea, that it's bug vomit basically."

On an early foraging experience: "It was a revelation. On a cold, spring morning, on a very shitty beach, this thing discovered as beach grasses was just there, and it was coriander. This thing that we had been taught that we had to travel thousands of kilometers to get was suddenly there, and it was eye-opening."

On the dangers of foraging: "Nothing is not edible. If you see something, it looks pretty, it has a lovely appearance to it, you investigate. You assume that it's edible. Of course you don't just eat it without knowing. I'm not encouraging that, because you can actually die. I've done that myself: I've choked, and I've had on-the-spot violent diarrhea. Anything but dying basically."

On preserving and processing foods for later seasons: "It's quite romantic, even. Pouring things in jars, and then you're looking at it for six, seven, or eight months, waiting for it to be ready. It's sort of an old-fashioned ideal of preserving food. But we do that a lot or else we don't have the diversity of flavors we need to surprise our guests during winter." He estimates that Noma has more than 1,500 kilograms of dried and processed foods in storage right now.

On making lunches for his one- and four-year-old daughters: "It's the most nerve-wracking thing there is in the entire world, because you never know what happens. The thing they enjoyed last week, they might look and say, 'I don't want that, I hate it,' the following week. And the most important thing for you is that your children have a healthy and happy relationship with flavors and with food. So this little moment I have every morning, where I'm planning the lunch box, is truly one of the most nerve-wracking moments I have through the whole day."

On his new book, a "lunch box book": "I think I've found the solution for how to keep kids happy, and how to keep them inspired when they actually open these boxes. Even though there will be kids around them saying, 'What is this disgusting thing, why are you eating that?' and all these things that kids say to each other."

On appreciating farmers: "This is something that's a real problem in our part of the world. I don't know how it is [in the US], but it's a shame. If you think about it, these people are the ones that feed all of us, whether you're buying at a farmers market or wherever you are, but they're so under-appreciated. Nobody gives a shit about a farmer."

In response to a question about eating insects or seafood while they're still alive: "There are some of these foodstuffs that I think just taste better when they die in your mouth as opposed to die when you squish them with a hammer or something like that. And of course you could argue that there is a theatrical element to it."

In response to a question about health inspectors: "For some strange reason we've never really had a problem with the bugs. And also, if we do something in Denmark, immediately somebody blogs about it or it's a story, so everybody knows. So they'll enter and say, 'Okay, show me the bugs section, please,' and they want to see that it's not a filthy corner with bugs. But I don't want to get into stories of the inspectors because I will get angry and start throwing things around."