Share All sharing options for: The New Prefab, LEED-Certified Starbucks in Colorado

Starbucks is getting ready to unveil its first entirely prefab, environmentally friendly, LEED-certified store in Northglenn, Colorado. The outpost basically functions as a drive-thru and walk-up window, in that there's no seating for customers or free internet. As Fast Company reports, the small, modern structure — clad in Wyoming snow fencing — was built in a factory and dropped off by a truck. These 500 square-foot locations are part of a pilot program the company is developing to explore expansion into markets that might not be able to sustain traditional, larger versions of the store.

This Denver Starbucks is the latest in a series of cutting-edge outposts the Seattle-based company has tried out in several places around the world. These include a concept shop in Amsterdam and an architectural marvel in Fukuoka, Japan. 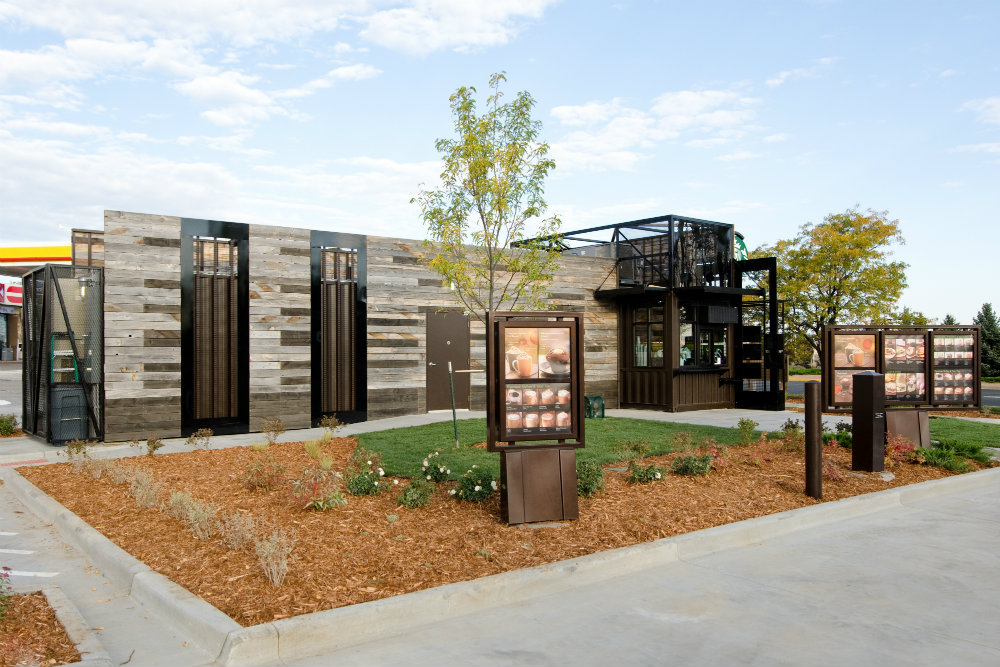 The company doesn't outsource their design projects and has fourteen architectural offices worldwide; "[they] conceptualize all stores from within." Anthony Perez, one of the company's designers, describes to Fast Company how these structures use local materials, "exude craftsmanship," and actually glow at night. The conceptualizing and philosophizing don't stop there: they want these to be a "relevant place to the community... Much like coffee shops will hang pieces from local artists on the walls, Perez wants to see these rear illuminated exterior panels serve a similar function — to push individuality and maybe even local artistic voices." Also, to be cheap, quick to produce, and really, really profitable.