Top Chef Texas Episode 9: This BBQ Is the Pits

Share All sharing options for: Top Chef Texas Episode 9: This BBQ Is the Pits 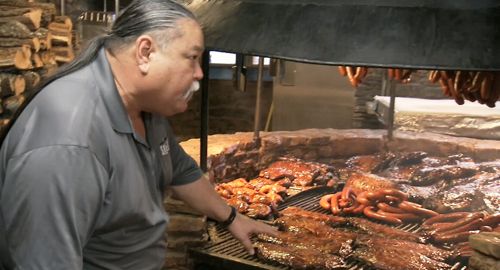 Happy New Year, everybody! We've had two weeks to celebrate Heather's dismissal from Top Chef Texas, and what a two weeks it has been. Heather's ousting allowed us to truly enjoy Christmas and New Year's Eve. Obama was so excited about her being gone he gave us two federal mail holidays. We've got nine contestants left, and they are mostly nice. Chris Jones and Sarah get on my nerves a bit, and there are weak cooks on the show, but we are finally at that happy place in the thick of the Top Chef season where each elimination becomes a small surprise. There are still eight people on this television program who will not win. 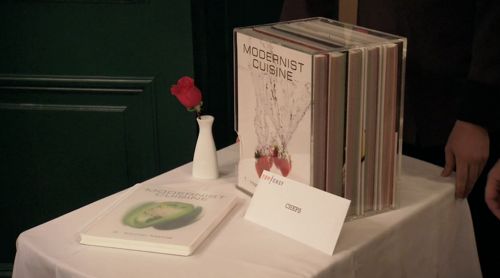 Our chefs snack and drink and celebrate the Ding Dong Witch being gone. Beverly is so relieved she allows herself exactly 90 seconds of relaxation. But before she can finish it, the chefs are greeted by a delivery of Modernist Cuisine, the recent epic tome on cooking techniques. Nathan Myhrvold is a billionaire who devoted himself to the non-profit study of cooking perfection. It is not very applicable for the home chef, but it is very pretty to look at. The cheftestants are instructed to study up on it. It's over 2,400 pages, which makes memorizing it unlikely. Beverly, true to her strict hard-working upbringing, stays up late doing her homework.

Myhrvold is this week's Quickfire judge. Chris Jones, a molecular gastronomist himself, is in awe of him. "If I was 1/10th as smart as him, I could rule a continent." What continent? Like, Australia, because I feel that I could pull that off. Also, why not start smaller, like with a state? From what I can tell you rule nothing. Also, Chef Myhrvold is as smart as himself, and he is not in charge of anything. The chefs are instructed to create a dish that illustrates Modernist cuisine. The winner gets immunity and a coveted copy of the book. Ty-Lor fakes being excited about that possibility. Everyone keeps saying it's "coveted." Yes, it's expensive, but I know regular people who own it and also it's in about its fifth printing. If you really want it, you'll be fine.

The kitchen fills with vacuum sealers and chemicals ending in "-drine" and nitrogen vapors. Grayson and Sarah seem the least comfortable with fancy science techniques, and they fake it. Crary is confident about the challenge, himself both a Modernist and a lover of modern art. In fact, we see a shot of his casting video where he reveals his own modern art paintings. They are largely tasteful nudes. Tasteful nudes are "something that I like to do." Wow. 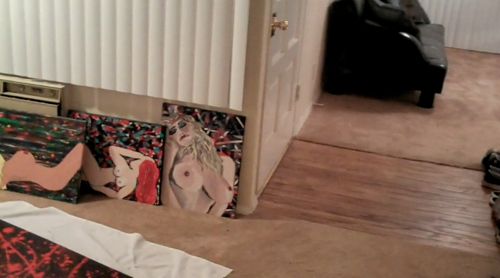 Beverly, having studied up, puts her game face on. I hate the phrase "game face" but this is honestly that kind of face. I can't think of a better name for it. 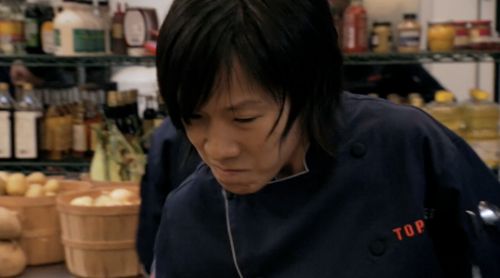 All that preparation doesn't help her when the time for service comes. She steps forward to foam her flash-steamed clams and blows curried seafood foam all over Padma's dress. Padma is visibly unhappy. Nathan calmly instructs her how to screw on the cap of the gadget in the future. Beverly is socially awkward because her family was so strict. That is no reason. If they were so strict, why do you act like this? 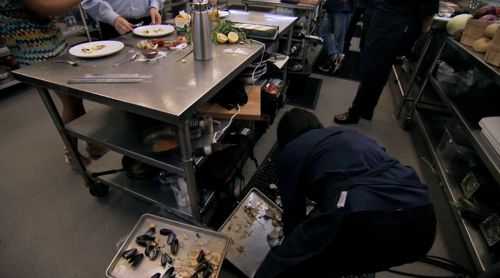 Chris Jones gets embarrassing when introduced to Myhrvold. "I'm so honored to meet you." His voice is all breathy and it makes me cringe. I look like how Ty-Lor looks. 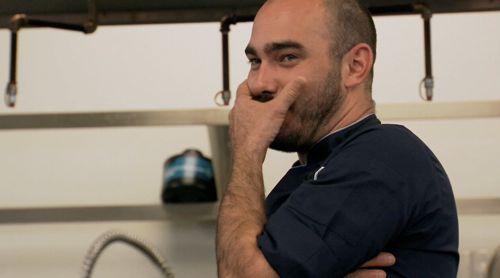 Jones is doing a miracle berry tasting, a pill derived from a fruit that turns sour into sweet. Anyone who has read the New York Times in the past five years knows what this, but he talks to Myhrvold like he's an idiot. Nathan shoots him down. "I grow it in my basement." Jones says, "I would love to visit your basement." Careful, Nathan. Maybe that's okay but whatever you do don't go into Chris' basement, or you will be putting lots of lotions on the skin or getting the hose again.

Paul's endive salad, Beverly's foam-splosion, and Grayson's dill caviar failed to impress Nathan. On the other hand, he enjoyed Sarah's breakfast raviolo and Chris J's berry tasting. Jones wants this win so bad he almost throws up on himself, but Ty-Lor's simple watermelon, spice, and olive oil presentation wins immunity. Jones buries a knife in his own stomach and saves face. 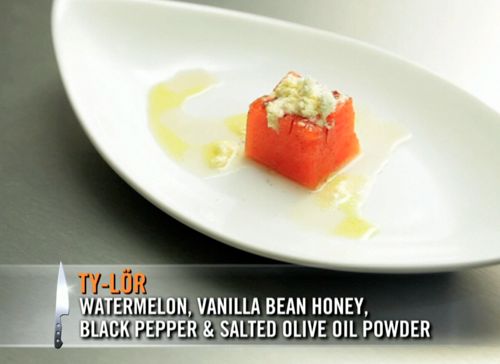 For the Elimination Challenge, the chefs are moving from modern to traditional: they are cooking real Texas barbecue. Barbecue is so good! This episode was actually frustrating to watch because I wanted to be eating so many of the things at the Salt Lick, the home of this week's challenge. Sarah says "I love to grill" despite grilling not being barbecue. Oh well, she will learn. We learn that Myhrvold has also won a barbecue competition in Memphis. This guy's amazing! Also he's a billionaire. Good for him.

The chefs form into three teams. On the Red Team we have Sarah, Ty, and Edward. Blue is Paul, Grayson, and Lindsay, and White is Beverly and the two Chris's. Each team will have all night and day to cook brisket, chicken, pork spare ribs, and two sides for 300 hungry Texans. That will be exhausting. The cool thing about the all-nighter challenges is how good everyone always does and how pretty they look and how the things that come out of their mouths make a lot of sense.

The teams each have two grand to spend. Red and White go traditional, while Blue, under the lead of Paul, goes with an Asian barbecue profile. A risk in Texas? Perhaps, but it's almost always better to stand out. At the restaurant supply store they buy so much meat. I love meat and it's a little disgusting. So many animals dead. 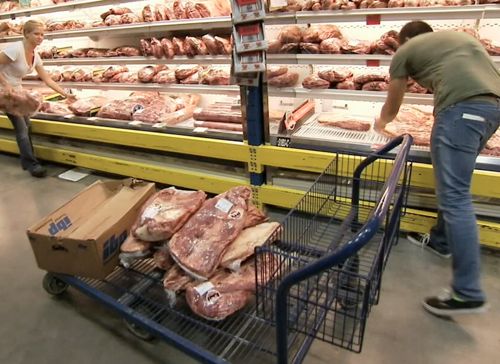 Before cooking begins, the chefs meet the scion of the Salt Lick BBQ family. He gives them some instructions on how to properly work a pit, and then he serves them up a family size meal. When he gives them their food his hands are almost TOO clean. 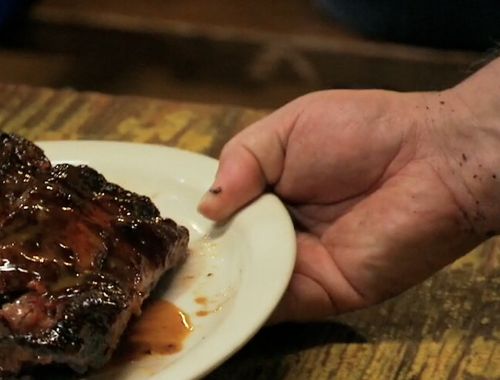 Again, the food here looks incredible, and they're going to be hard pressed to beat this guy at his own game. Also, they are about to stay up another 20 hours, and they are eating a giant meal of smoked meat. You know, energy food? My colon is rolling over in its butt grave just thinking about how that night's going to go.

Their all-night prep begins with some outdoor barbecue pits and smokers in addition to kitchens inside a motor home. Beverly teaches everyone that you shouldn't reduce a gallon of bourbon on a motor home stove. Chris Crary says, "She's really book smart but when it comes to common sense she's missing a few chapters." Thanks for the folksy wisdom, Chris. 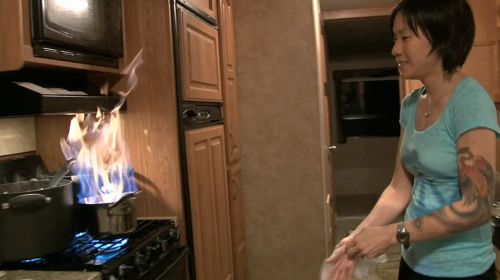 Jones is working on beer can chicken, a technique where you stand up chickens on the grill with a a full open beer can shoved up their butts. It makes very good chicken, I've done it, but it's not barbecue. Crary helps load the beer cans in and says, "Did I put it in the right hole? It's so tight in there." OK, that's enough out of you, Crary. I feel like you've said that so much you have it saved as a QuickText. (This joke makes more sense if you have a cell phone from 10 years ago.)

When Tom comes to inspect the prep with his usual passive aggressive stylings, the sleep-deprived chefs turn loopy. Grayson brags about the Blue Team's Asian barbecue, "You're gonna love it. It's gonna be like sex in the mouth." Sex in the mouth? She sounds like a Dutch prostitute listing prices. "It ten Euros for sex in the mouth."

As service nears closer, Sarah inhales lungful after lungful of pit smoke in the 100+ degree heat. Finally it's too much and she heads inside red-faced and wobbly. It looks like exhaustion, and the medics confirm. She's off to the hospital. 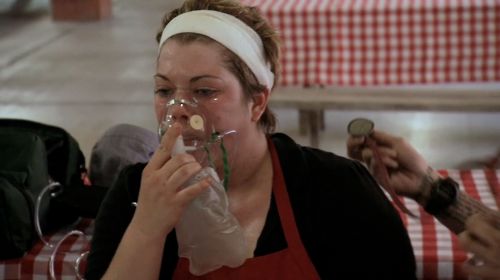 Ty-Lor and Ed are on their own for the time being, and Ed is not very sympathetic. "If it was me, I woulda pushed through." He and Ty begin frantically pre-cutting the meat so as to speed up the actual service. Once dinner begins, it's an insane rush. Ty calculates that he and Ed have 7 items to put on all 300 plates, making for 2,100 plate strokes, and only four hands to do it with. "Plate strokes." But everyone manages, and Sarah even makes it back for about ten minutes to help plate her chicken to the judges before needing to "sit down" again. She doesn't feel guilty about it at all. There is a sick set by Tito and Taranchola. 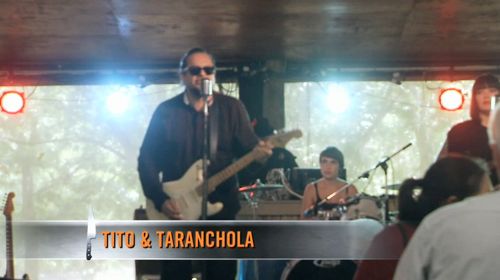 It's time for judging. What a brutal day. Tom says, "What they all learned today is that there's a lot more to barbecue than just slapping meat on the grill and serving that." Tom, do you really think that a single of one of these chefs on Top Chef Texas thought that about barbecue before today? It is both famously revered and hard to master. Be quiet.

Blue Team's Asian gamble pays off and they are picked as the judges' favorite. Grayson keeps not making sense. Tom wants their chicken recipe and their brisket was by far the best brisket. Paul, a Texan chef, did his state proud. The team takes home fifteen grand. 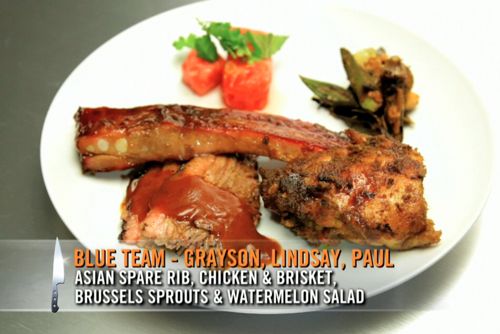 All six members from the Red and White teams get sent before the judges for Elimination. It sounds like any one of them could easily get sent home. 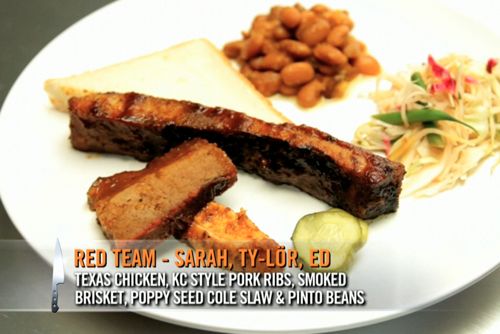 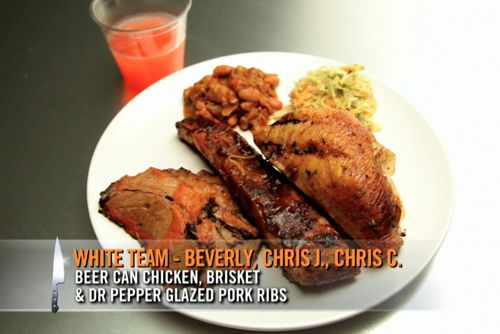 Chris Jones managed all his team's proteins, yet none were cooked properly. Beverly made a bland slaw and raw baked beans. But Crary was in charge of the rub, and its saltiness made most of the proteins inedible. That's a deal breaker. The Malibu Stunner is this week's loser, and he heads back to California. Poor guy. He screwed up, but I will miss him. At least he'll always have his art. 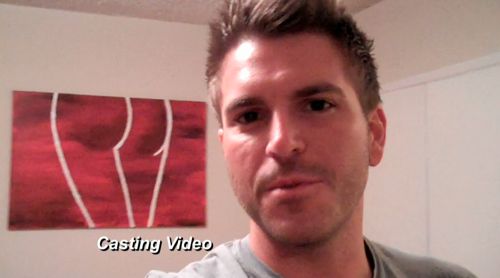 Only eight chefs remain, which means next week is Restaurant Wars.