Share All sharing options for: Top Chef Texas Episode 12: The Turds & The Bees 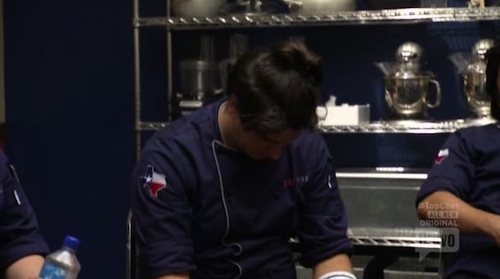 There is a famous scene in the Jack Nicholson film Five Easy Pieces where Jack's character tries to get plain toast at a diner. A surly waitress informs him it's not on the menu. They go back and forth. Jack then orders a chicken salad sandwich but instructs her to hold the chicken salad. The waitress says, "You want me to hold the chicken, huh?" Jack says, "I want you to hold it between your knees." It is a great scene. See that movie. But my point is twofold. One, me poorly retelling a scene from that movie is more interesting than last night's block party snooze-fest, and two, Bravo can hold this episode between it's knees. I was not compelled by Battle: Chicken Salad. 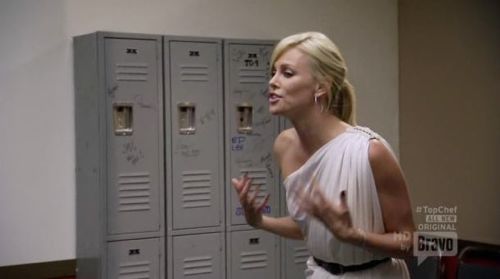 At the top of the episode, the chefs get a personal thank you from last week's guest judge, Charlize Theron. She gushes at them while they stare on with slack-jaws and micro-boners. It is a odd to hear her tell these guys that she is a fan. I believe that she's a fan, but she's a fan of past seasons, with which these guys have nothing to do. "I want you all to know that you are the best, and when I say 'you' I mean Richard Blais." They just nod and try not to drench their aprons. Charlize says, "Thanks for having me!" Sure, because these chefs had a lot to do with her appearance and also explicitly allowed it to happen. Sarah was on the phone for months coordinating schedules with Charlize's people.

This week's Quickfire teams the chefs up (Paul & Ed / Chris & Grayson / Lindsay & Sarah) and asks them to speed through three kitchen tasks: shelling, deveining, and butterflying two pounds of shrimp, shucking and slicing a crate of corn, and making a pound of perfect fettucini. Once all three are complete, they can begin making a dish utilizing all the ingredients. They've only got 40 minutes for all of it, so this Quickfire is about technical precision and speed. It's also about how Cat Cora is apparently a Hobbit. 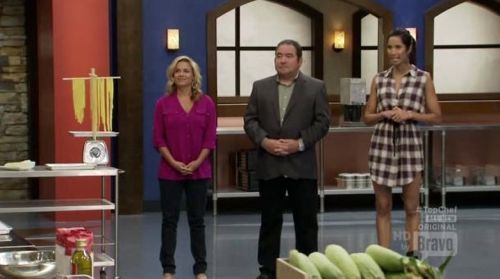 Before the competition even starts, Paul is apologizing to Ed. Every time they've been paired in the past, they've lost, and Paul think it's his fault. Relax, bud. You are being really high-strung. Remember how you slung weed in college? That was so chill. You definitely need to twist one up and mellow out. (This joke has made me imagine having to de-poop 70 shrimp while stoned, and I can't imagine anything worse. I would be very paranoid I didn't get all the poop out, and there would probably be a tooth brush involved. I take it back. Paul should not get stoned.) 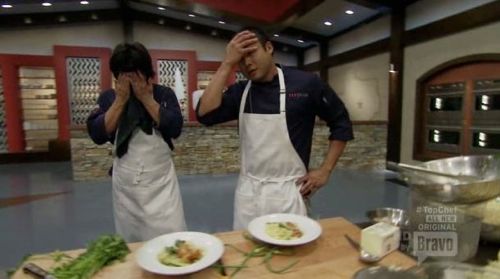 Grayson points out that only boy shrimp are dirty, which further proves my theory that girls don't crap. (I am joking. They take huge craps, constantly. Think of the most attractive woman you know. Within the last 45 minutes, she Health Code Violated.)

Sarah and Lindsay are the first time to finish, and the first time to get cooking. Their time advantage is a useful one. They are garnishing and tasting their dish with minutes to spare. Sarah is extremely satisfied. "I would eat it every day and be happy." I bet you would. Everyone else is scrambling. Ed asks Paul about the shrimp. He mumbles something. They are in a bowl. They are definitely going to be cooked. But then they aren't. He flakes completely on the shrimp, despite having more than enough time while he seasoned the rest of the meal. They are disqualified. Much like last week's knife turn, Padma rubs it in. "It's a shame, because the rest of the flavors are fantastic." Padma, you tall drink of jerkwater.

Emeril compliments the chefs on their efforts. "Uh wozza lotta fun ta worch." I love his Fall River accent so much. As only two teams are now eligible, it comes down to Chrayson and Sarindsay. They both made pasta with shrimp and corn and also other things, because that was the challenge. Chris Jones fried bacon because he is so LOCO. Speaking of loco, did you guys see him in the New York Times? Congratulations, Chris. You are JUST like a samurai. Grayson and Chris's hair bun win, and they split ten grand. Chris explains how much that money means to his hair bun and his hair bun's family. "$5,000 may not be a lot of money to some people," he says. Who on this show is it not a lot of money to? You really need that money? You know who else does? Everyone. Five grand is the best. (I imagine.) 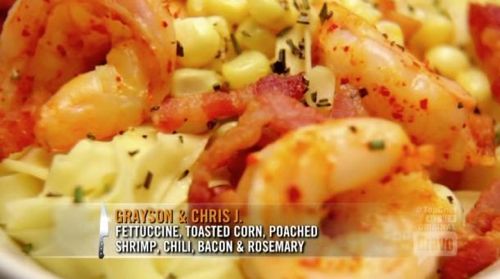 Sarah, as always, is visibly disappointed. (Her Twitter bio should read: Visibly disappointed.) Man, I dislike her so much. My notes say "Eat your pasta dish every day until you choke on it." That is very rude and I don't truly mean it, but why can't she just be nicer? She blames Cat Cora, because Cat Cora doesn't like tarragon. You should have put pipe weed in your dish, Sarah! Hobbitses love pipe weed. 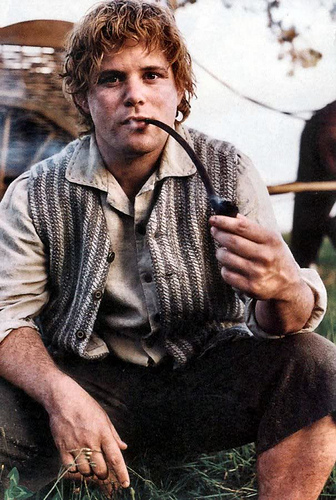 Call off all the weddings, because for this Elimination Challenge, the chefs' Quickfire partners became their enemies. Everybody will face off against their teammate in a 200-person block party to benefit the San Antonio Food Bank. The teams will brainstorm on a dish, then they will each serve their own spin on it at the party. The diners will vote on their favorite dish and the losers from each team will face elimination. The winner gets fifteen grand. As the teams brainstorm, Grayson sneaks a Stupid Pill. Are contestants allowed to bring medicine from him? Why'd she bring that. She insists on chicken salad sandwiches. For whatever reason, Chris doesn't put up a fight. He is not eager to make chicken salad sandwiches for a hot outdoor Texas block party in one of the final weeks of competition, but Grayson is all, "Chicken salad sandwiches are the ultimate party food." Sure. Paul and Ed agree to do Asian beef barbecue with pickled vegetables, and Lindsay and Sarah are making meatballs and a salad.

But there's a twist! Cat Cora, Emril and the chefs have to travel all the way to Mordor and throw Padma in Mount Doom, because that is the only way to destroy her. Actually, they have to bend over and take it from Healthy Choice, who are sponsoring the event. Padma says that all their dishes sound heavy, so they will have to make a healthy version, in honor of Healthy Choice's new line of "Cafe Steamers". What? I rewound twice to make sure I heard "Cafe Steamer" right. That honestly sounds like a weird sex act, like when you pay a homeless guy to crap on your chest in a Starbucks bathroom. Don't do that! Even if it's healthy! 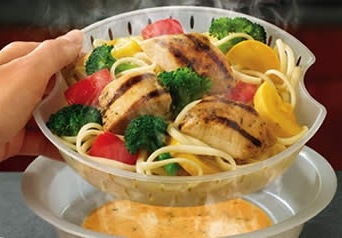 The trick of this competition is *how* healthy to go while still being delicious. Chris Jones is making a tofu-emulsion mayo replacement, and Grayson is using "not a lot" of olive oil mayonnaise. I'm sure Chris's is healthier, but I'd rather eat Grayson's. Ed uses short rib while Paul uses ground turkey. Sarah chooses turkey as well, while Lindsay makes her meatball with lean veal and lamb. It really is all about balance. I bet the Libra will win! (I just learned yesterday that the Libra sign is about balance, so I am eager to brag that I know that "fact".)

Two hours is not much time to make food for 200 people, especially when you are allergic to bees. There are bees everywhere? That sounds like a nightmare. Jones is especially nervous, as he is allergic. This is what happens to him when he gets near bees.

Padma, Tom, Emeril, and Food & Wine's Dana Cowin show up at the block party. Padma looks just OK. That white jumpsuit isn't very flattering at all and I don't even notice what she looks like. Sometimes I forget she's more than just a brilliant mind! 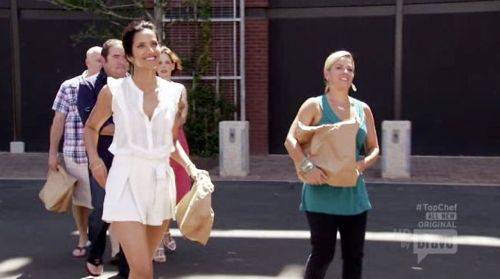 Top Chef Season 4's Ryan DEFINITELY doesn't notice at all. He spent a month with her and he still stumbles over his words while he gives spiel about being the Healthy Choice Flavor Ambassador. Cool job! Does that mean you can park anywhere or murder prostitutes and no one can send you to jail? It would be great to park anywhere. "I'm not actually handicapped, I just need to run inside this grocery store and grab a few delicious CAFE STEAMERS. The name denotes two classic fine dining institutions: French coffee shops and STEAM." 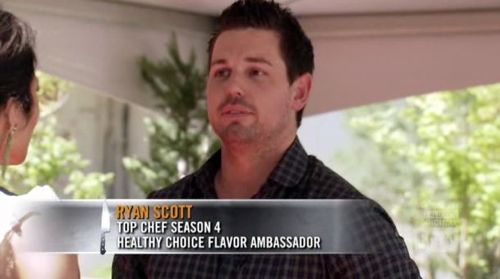 The diners dine and they vote their favorites. Ed's fattier short rib and home made bun prove no advantage, and Paul's ground turkey ssam and peach salad win. 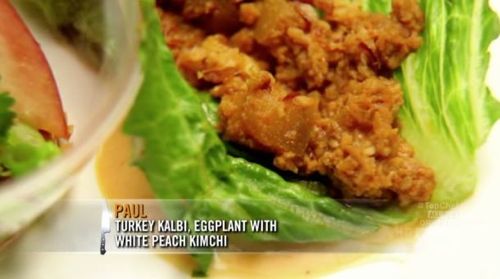 If you're going to make chicken salad, at least use mayo, and at least make it to order. For all of Chris's magical bee pollen emulsions, he made the sandwich ahead of time and the bread got hard. That was stupid. Grayson wins. 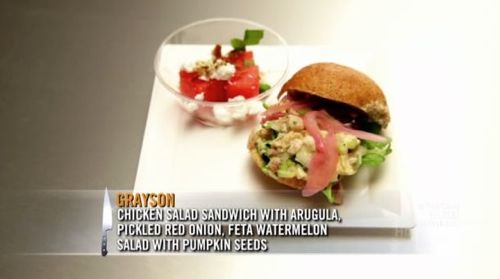 Sarah made a turkey meatball in a traditional Calabrian tomato sauce, but her salad is uneven. Lindsay's Greek-style meatball and salad is unusual and different, and the judges and diners love it. 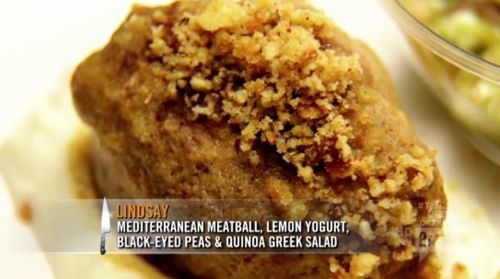 The three diner favorites are called before the judges. Despite her win, Tom is not a fan of Grayson's chicken salad proposal. Same here, Paul! Grayson gets VERY defensive. The last two weeks she has gotten very sassy in front of the judges. See her snap at Tom here. As much as its nice to see Tom yelled at, I agree with him. Chicken salad sandwich? Get out of here. I don't want to watch a show about people making chicken salad sandwiches, even when they are "elevated." Also, her elevation consisted mostly of using olive oil mayo? Incredible. You are like a listicle in Real Simple. Cook better. Paul gets the win and fifteen grand. Someone said he's up to 70 grand already? That number might not be true, but he wins a lot of money challenges. He knows a lot about making money because remember how he used to sell weed? 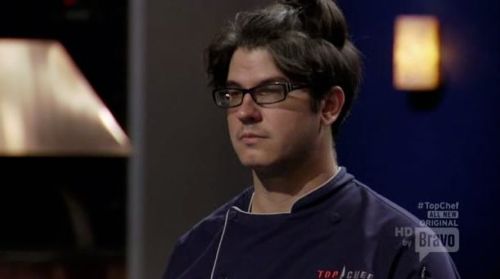 Because he wears his hair in a bun and also his stupid crazy ideas never lead to well-executed food, the judges send Chris home. It is probably for the best, as Texas and this entire competition is full of bees. Bee safe out there, Chris. 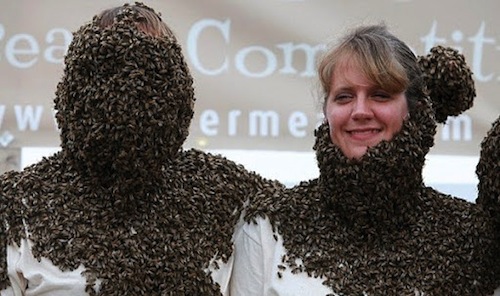