Share All sharing options for: The Layover's Los Angeles Episode: Just the One-Liners

As the sun sets on the first season of The Layover, host Anthony Bourdain found himself in Los Angeles, driving a Porsche around town and giving tips on how to not be a total dweeb in front of celebrities at the Chateau Marmont. He also hung out with chefs Roy Choi, Ludo Lefebvre, Jon Shook and Vinny Dotolo, and enjoyed some "wholesome" burlesque dancing. Now, on to the Quotable Bourdain — feel free to add your picks in the comments.

1) On what brings him to Los Angeles: "Fuck keeping it real. I'm flying into LA to get pitched on some new competitive reality series I ain't gonna touch with a ten foot pole."
2) On In-N-Out: "The only American chain worth a damn."
3) On how In-N-Out compares to some other chains: "They also treat their employees like human beings...take that, evil clown." 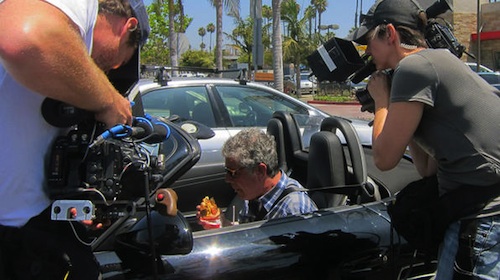 4) On what he's got coming to him: "I deserve a Porsche. And I deserve to get into an accident with a transsexual hooker while high on crack."
5) On his LA attitude: "This is Los Angeles. I'm on TV mother fucker!"
6) On his prejudice as a New Yorker: "I am a liar; I am scum. I used to talk shit about LA because that's kind of what you're expected to do as a New Yorker."
7) On his experience level: "I long ago agreed to suck the scabby cock of the great television Satan, so really I ain't hardly no virgin when it comes to LA or Hollywood or just being a big nasty media whore."
8) On the sunny side of LA: "Talk to me one day later after driving around in a nice car with the top down and I'm thinking 'I could live out here!'" 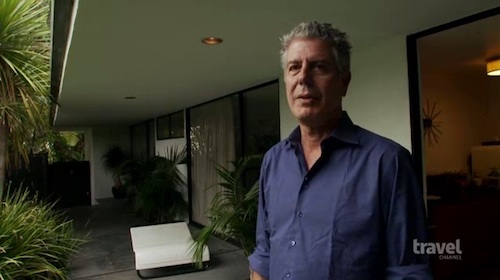 9) On the rules of the Chateau Marmont: "You don't geek out over who you may or may not see here. You definitely don't take pictures. And you just don't act like an asshole, and you will be treated the same as the famous guy at the next table."
10) On the advantages of staying in the Marmont's bungalows: "My own entrance, so I can just pull right up, put my car in the garage, slide right in, and start dismembering prostitutes."
11) On the Custom Hotel, which is near LAX: "If you're into dressing up like a Pan-Am stewardess and getting spanked or some shit, this might be a good place to do it."
12) On the beaches in LA: "If you're lucky you might see Ben Affleck chasing his hair along the beach like a big tumbleweed."
13) On life expectancy in Los Angeles: "Around here, once you stop looking good with your shirt off, they kill you." 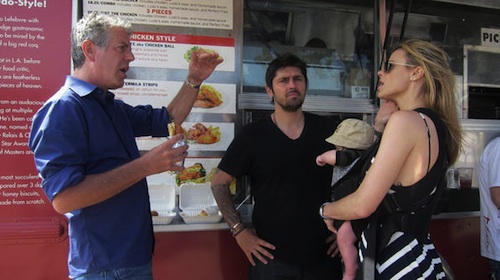 14) On what really matters: "Classic biscuits, which Ludo can hardly pronounce but sure as shit knows how to make."
15) On what it would take to live in LA: "I could live out here, if I did a game show. And about 90% more barbecue-centered shows. And was a completely different person."
16) On LA stereotypes: "Sun, surf, thousands of women with identical breasts and noses; there is that." 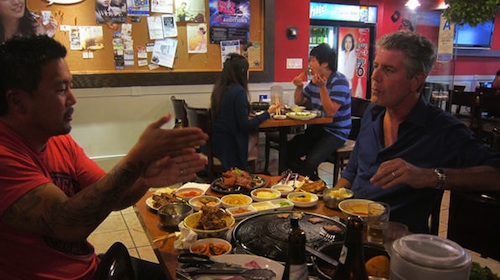 17) On Koreatown restuarants: "There are like 50 white girls outside like 'I want the live octopus I saw on TV!'"
18) On celebrities: "The amazing thing about celebrities? They're not just short, but they're really tiny...But they have big heads. They're tiny bobbleheads."
19) On his preferred type of Hollywood tourist attraction: "I may not give a fuck about the Walk of Fame but I do love a good Hollywood-related grizzly death."
20) On souvenirs for your sweetheart: "Tell her you love her with a home trepanning kit."
21) On not underestimating your fellow drivers: "Road rage is like something out here. They may look like gentle Californians but some of them are heavily armed." 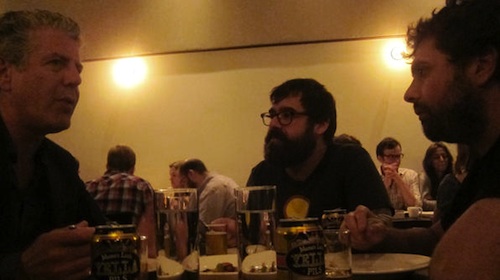 22) Bourdain asks Jon Shook and Vinny Dotolo of Animal the important questions: "So how do I get a medical marijuana card?" [Learns he needs a California drivers license.] "That's some racist shit man."
23) On going back to burlesque club Jumbo's Clown Room next time he's in town: "This is family friendly fun. Maybe I'll bring the kids." 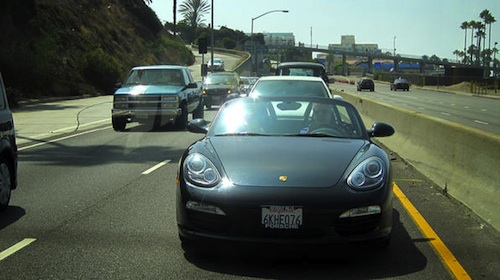