Fucked Up's Mike Haliechuk on the Sleeping Guy at Per Se

Share All sharing options for: Fucked Up's Mike Haliechuk on the Sleeping Guy at Per Se 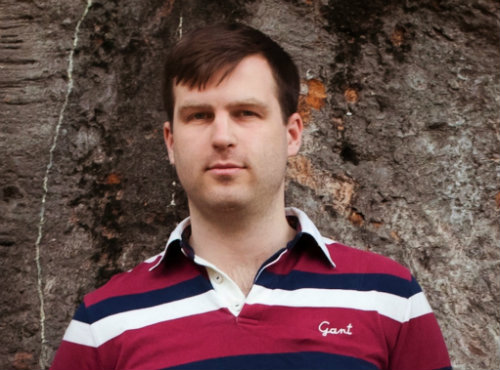 By looking at a list of the places Mike Haliechuk likes to eat, you wouldn't think he was a vegetarian. The guitarist and head songwriter of hardcore group Fucked Up, whose last record "David Comes to Life" is widely hailed as one of the best releases of 2011, has done the pintxo thing in San Sebastian, tasting menus at Mario Batali's Del Posto, and wants very much to eat at The French Laundry. In anticipation of his band's new release, "Year of the Tiger," the latest in its series of Chinese New Year singles, Haliechuk got on the phone to talk about how he got into food and what he's eating these days.

What was the last good meal you had?
Over the holidays I went to Chez Panisse, which was really good.

Can you describe the experience?
I'm vegetarian so I like places like that which can split up a menu.

What do you mean split up a menu?
It's only prix-fixe, but there is a regular menu and a vegetable menu.

Was it your first time there?
It was my first time downstairs, but I had eaten at the café before. What I had was kind of all mushrooms: a really sick mushroom soup and I think a polenta with morels.

Do you prefer upstairs or downstairs?
I liked the upstairs better because it's kind of like this amazing restaurant tucked into what looks like an adult treehouse, but they do it up so there is food everywhere — bottles of wine kind of lying around in the entrances and flat surfaces, flowers everywhere, and wicker baskets of fruit and vegetables all over the place.

Did you go anywhere else worth mentioning while out west?
Not so much. We had a full list of ideas but then didn't end up having time because it was the holidays. We tried to do French Laundry but couldn't get in.

Was it your first time trying?
Yeah, it was. I've eaten at per se, but every time I've been close to Napa it's been on tour, and there isn't any time.

What did you think of per se? The meal there is heavy, but they do have the veggie tasting.
It was great. A 5-plus hour meal, and the guy at the next table over fell asleep during service. The veggie menu isn't that heavy. It takes a while, but I got a slice of pizza almost as soon as we left.

Tell me more about the guy who fell asleep.
It was this family: a mom, dad, and a little kid. So right away we thought something was off, because who spends $300 on a meal for a seven-year-old? We kept glancing over, and like two hours into the meal, the dad was slumped over in his seat with his eyes closed.

That's fantastic.
It was hilarious, because service there is so air-tight. I read that Phoebe Damrosch book about being a server there, and it can throw off the whole kitchen if they have to wait to bring someone's meal out, because things get cold and they won't bring out food for the table if someone is in the bathroom or I guess...sleeping?

What other spots do you like in New York?
I like this neighborhood spot at the Maritime Hotel. It's just this real simple Italian place that has a real nice room and cheap food. One place i've been to like every day this week is 16 Handle, which is a new fro-yo place that is insane. It's hard to resist. You get to like pick all the toppings and pour out your own yogurt.

Which is your favorite?
Last night I had mango and watermelon with like 10 things on it.

Any other places?
I really like Del Posto but I've only been there once. They also have the secret vegan menu.

Brooks Headley, the pastry chef, is all about that.
For sure. He was in hardcore bands, so the day we went, he wasn't in but we left a message with our waiter and he came to see us play the next time we were in New York. He brought treats to the show.

That's pretty neat. What did he bring?
He brought a bunch of little pastas and some unmolded chocolates and stuff. Dessert was the best part of that dinner. We got like an extra dessert course, which they served in these old style block parmesan graters, where you eat off the top and then open the drawer to find a few more little things. The waiter told us that they each cost like a few hundred dollars, and that a few people who've eaten there have like walked off with them.

Now let's move to memorable meals you've had on vacation or on tour.
I try to forget meals i've had on tour because it's either Subway or McDonald's. I will be able to tell that Subway bread smell for the rest of my life. Someone just told me that some guy in New York actually made that smell into a perfume.

What about positive experiences?
Last summer I went to San Sebastian for a weekend on vacation and had like the best food night of my life. We just spent a few hours walking between different pintxo bars. It was hard because it's difficult to ask if there is meat in certain items because of the language barrier, but also because it's so crowded and busy. I kind of just took my chances and tried to just get stuff that looked safe. I'm pretty sure I ended up eating a lot of foie.

On tour in Spain the only thing I can eat on the highway is like massive egg and potato sandwiches, but they are so good that I will eat them for lunch and then get to the city and have the same thing for dinner.

So tour food is a little better abroad?
Well, it's a bit easier to manage in the U.S. because everywhere we go we've been like a dozen times and have places and spots. Honestly, so much of tour food in Europe is just weird versions of bad U.S. highway food anyways. Tour is a lot of hearing about great places that you never have time to do. Like we'll never be able to go to Di Fara cause we never have time. People have tried to go to Hot Doug's in Chicago, but we never have time to deal with the line.

What about places in Toronto?
I really like this place called Guu which is like Japanese street food. It's this tiny cramped little room where the staff all yells at you when you enter and leave. They do like really intense small portions of fish and grilled meats.

Like an izakaya?
Yeah. There are like four vegetable things tops, but they are all insane, so I'm always happy to go. They do this tofu nugget hot pot which is basically chicken McNuggets in a broth. Also fried lumps of brie cheese with mango dressing, boiled spinach with really intense miso, and a banana tempura dessert.

How did you get into food?
I've always kind of been into food in different ways. When I was in university, I was real into food security because I was vegan and doing an environmental studies degree. Before the band I worked in mostly food co-ops and grocery stores like Whole Foods. So i was into food on that level before I really cared what I ate, other than if it was vegan.

I would read a lot of Richard Manning and Wendel Berry and stuff and take like sustainable agriculture and like permaculture classes or whatever. So I guess being into like dining and eating just came out of that.

Do you care about the music played in restaurants?
I never notice.

Even when it's bad or something you really like?
Nah, I mean, I feel the only time I notice is if it's too loud, and then it's bad regardless of what it is.