Share All sharing options for: Ed Sheeran on Eating Where Elton John Suggests 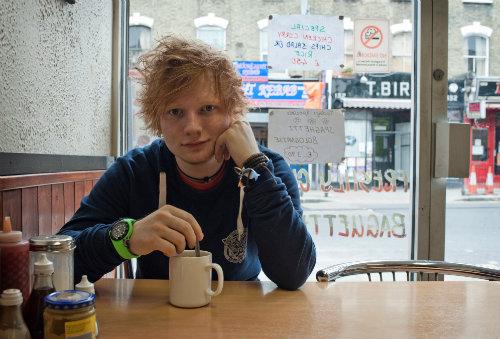 Over in England, the singer-songwriter Ed Sheeran is a sensation. Last year, his album sold close to one million copies in a matter of four months, he racked up more Brit Award nominations than the formidable Adele, and all throughout, his army of young fans has grown and continued to swoon over his every appearance, move, smile. So, as Atlantic Records attempts to spread the madness into the United States with an American EP, "The A-Team," and a tour supporting Snow Patrol, Sheeran got on the phone to talk about his eating habits. Turns out he's not much different than any other twenty-year-old, as long as you don't count the times when Elton John gives you restaurant recommendations.

What's the last good meal you had?
The last good meal I had was in Venice, Italy. Actually it was a while ago, on New Year's. Right now I'm on tour, which basically means I'm making myself sandwiches every day. But on New Year's I went to a place called Da Ivo, and that was a beautiful experience.

Can you describe it?
I got put on it by Elton John. He called me up, said, "I've booked you at the best table in Venice and you need to go there." It's kind of a family-run restaurant — really small, really intimate. Really good wine, really good steak. It was so nice.

How does one get treated at a restaurant when Elton John has made the reservation?
Well! I'm still a kid at heart, so I want my steak well done and a glass of orange juice, so when you order things like that at a nice restaurant, they sort of look at you like you're mental. So there was a bit of that, as well.

What are some of your favorite places in England?
I like a place called Nando's that does Portuguese chicken. It's kind of like a fast food chain, but it also isn't, since you can go in there and sit down and enjoy dinner. But it's quite affordable. Some of the best roast chicken you will ever have.

Pizza Express is another place. Again, it's kind of similar to the Portuguese place in that there are many in London, but it's poshly-made pizza that is quite good and affordable. You can eat for about 10 Euro.

Do you ever try high-end spots?
No, because I don't really like spending huge amounts on food, to be honest. It was different on New Year's Eve, but I don't like the idea of spending a whole lot of money to get a small plate of food. I'd rather spend a normal amount of money and leave full.

There's a place called Gourmet Burger Kitchen, which is sort of like Fatburger. And of course, Wagamama.

What do you get at Wagamama?
Chicken katsu curry, always.

Do you ever cook for yourself?
I make good fajitas, and that's about it. On tour we just are given bread, meat, and salsa, so I just make one of those sandwiches every day.

What did you eat growing up?
Lots of cucumber. Me and my brother were obsessed, so we just ate that all day. We were weird! And also regular kids' stuff like pizza, shepherd's pie, sausages and mash, fish and chips.

Did you used to prepare the cucumber any special way, or are you talking just raw?
Yeah, just raw. We used to eat it as a snack. It's not common at all. Like I said, it's just weird.

What about restaurants you've hit abroad?
There's a place in L.A. called Umami Burger which is just next-level. That shit is wonderful.

Lots of musicians have given that place a shout-out. What's your order?
It was called a "Manly Burger," and it was magical.

What about pubs?
I can't go into any in America, but the ones I like in England are the ones that aren't branded and make their own beer. I love the ones where they lock you in at the end of the night and you just drink for hours. Sometimes the owner will give you the key and just let you have it all to yourself.

Any particular ones you like?
There's a pub in the town where I grew up called The Station.

Do you care about the music in restaurants or do you tune out?
I tune out completely.

Best meal you've ever had?
There's a place called Aldeburgh in Suffolk, where I grew up. They have the best fish and chips in Europe. Every time I go visit my grandparents, I go there. It's wicked.