The Paula Deen Debacle: Just Another Devil With a Deal

Share All sharing options for: The Paula Deen Debacle: Just Another Devil With a Deal 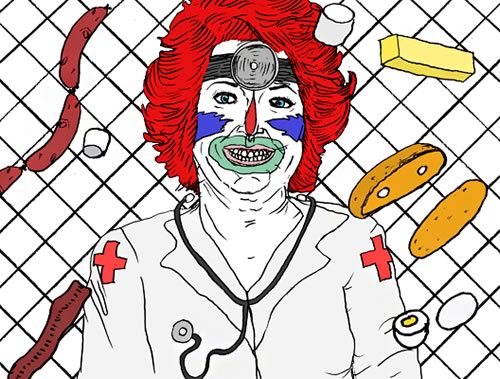 The Deen Debacle (it's way worse than a fail) at least makes me glad we get two print newspapers delivered every day. One, apparently going for the Food Network demographic, ran the usual "celebrity gets dire news, turns lemons into artificially-sweetened lemonade." The other, targeted at investors who need actual information, reported on talking to mad men and getting a rousing "Give me a break!" if not a "WTF?"

This all feels like a flashback to those wondrous days when an unwed mother, whose own mother was marketed as competent to be vice president, merited mega-bucks to flack abstinence. America swallowed both those flagrant ruses. Why not the concept of a woman who got sick eating her own cooking suddenly shilling for a treatment? (And it is a $500-a-month treatment, definitely not a cure.)

The disclosure of the long-rumored disease was about as surprising as learning Ronald McDonald might really be John Wayne Gacy. And it's no great shock that the Liberace of lousy eating is cashing in as the morning-after dispenser rather than the birth-control provider. She lives for attention as much as cash; compared with actual chefs producing professional food porn, she specializes in the kitchen equivalent of snuff films. The only wonder is, as an editor friend noted this morning, that she isn't marketing a line of nuke-and-gorge frozen dinners for other diabetics. (Or, might this crazy cat lady add, pet food for that growing market of companion animals with diet-induced "endocrine disorders.")

But so much of the backlash, whether "Leave Paula alone!" or "How soulless can one money-grubbing Smithfield hog be?", is missing the point. Several, actually.

The Holy Grail for pharmaceutical companies has always been a drug that every single human has to take every single day. The only wonder is that food companies have not teamed up with them. We may think Deen is dealing with the devil, and vice versa. But for both industries, this is about as good as it gets.

The big money is in processed crap and legal drugs, both in the producing and marketing of each, and a confused consumer is their best customer. Hiring her was flat-out genius. Tostitos alone spends $34 million a year on advertising; Lipitor's manufacturer made $11 billion (with a B) a year selling pills when beans might help, at least for those who chose the right parents (like diabetes, high cholesterol can be hereditary). There's simply no profit in pushing the right thing.

For the same reason, the Food Network and other channels have no incentive to teach viewers how to eat right; the cash flows in from ads for crap, and for enrich-your-doctor-and-your-pharmacist drugs (not from booze, interestingly). Which makes you somewhat understand why well-lobbied legislators are always pushing to cut federal money for public television and NPR. Julia Child was never interrupted by commercials alternating between Carl's Jr. and Viagra.

And don't get me started on food journamalism. Yesterday was certainly the time to come clean about why 25 million people have diabetes in this country, and what the difference is between Type 2 and juvenile. Instead we got nonsense about bias against women and the South and dissing of sticks of butter in Michelin-starred kitchens. (No one gets fat eating at Daniel, whose owner, incidentally, might take exception to Bouley being designated "New York's temple of modern gastronomy".)

Of course the C word had to come up. But not only does diabetes cut across all income classes. Defending Deen junkies as being "real Americans" actually white-trashes them. Maybe Willard Mitt Romney would never eat a burger with a Krispy Kreme doughnut for a bun. But Donald Trump took the failed vice-presidential candidate out for greasy-gross pizza, and she herself apparently has an unhealthy appetite for Taco Bell's Crunch Supremes.

Mostly, though, the missed opportunity lay in not noting you can't get diabetes by guzzling melted butter by the gallon. Surely some expert could have been found to point out the obvious: Dunk the fries in the ketchup, or have a Coke and deep-fried macaroni and cheese, and you're on your way to The Sugar.

At least the New Yorker, which under David Remnick has become one of the best food magazines out there, ran an article recently with one anecdote that deserves to be displayed in neon in Times Square. It was near the end of the profile of the richest woman in India, whose enterprises include drug development, of which oral insulin is the Holy Grail twice over. And it told of how the control group in one drug test skewed the results simply because they changed their diets and started exercising to impress their doctors. How cheap is that? You don't even need to add water for the pill.

The saddest reality of the whole Deen Debacle, though? After all this hysteria, apparently most people still can't spell her last name properly. No wonder Americans don't read labels.