Share All sharing options for: The Layover's London Episode: Just the One-Liners

Anthony Bourdain went to London on The Layover last night, where he did not ride the London Eye but did hit up numerous pubs, ate things like blood cake, hung out with Fergus Henderson and visited a shop selling multiple varieties of celebrity feces. Also, he walked Marco Pierre White's dog. On to the Quotable Bourdain; feel free to add your picks in the comments below. 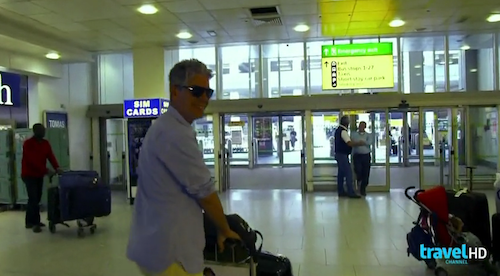 1) On London: "Bastion of good manners? Not really. Not the London I know... In fact how English is London? The national dish, more popular than fish and chips by far, is chicken tikka masala."
2) On how to deal with overseas flights: "When I first got on the plane, I smelled a really rank odor. Naturally i presumed it was the inflight meal, so i medicated myself and slept fitfully."
3) On British drinking habits: "People here like to drink. Sometimes too much, and sometimes, admittedly, not well." 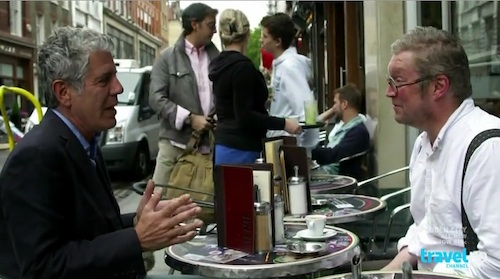 4) Fergus Henderson on being a hotelier: "It's odd. It's a child that doesn't go to sleep... A hotel is a constant beating heart that has to be attended to."
5) On taking a boat ride: "I've heard about these British nautical types, though. I have some concerns about possible sodomy on the open sea. Because that's a grand British tradition." 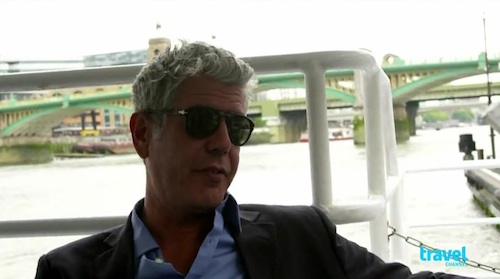 6) On London's architectural marvels: "That is the Blair bridge. Constructed to celebrate Tony Blair's slavish acquiescence to George Bush's every popcorn fart."
7) On Soho: "At night it can be both fun and douche apocalypse, you never know." 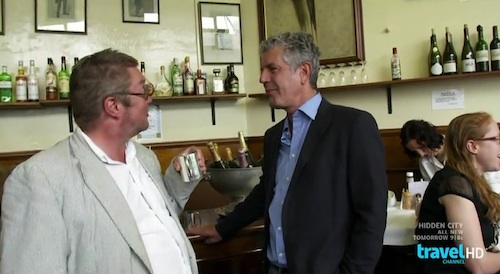 8) On Sweetings: "You are made to feel like you're back at boarding school. Minus the caning and the sodomy."
9) On mushy peas: "Where did this dish come from? What's the matter with peas? Why did people start mushing them? [tastes mushy peas] Oh, that's why." 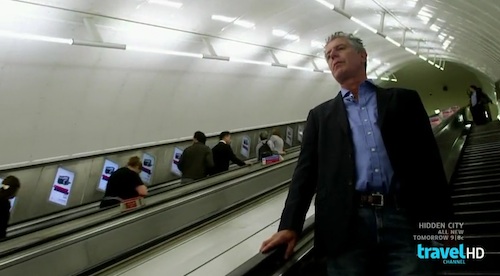 10) On Tube etiquette: "Some citizens of London are likely to take offense at being jostled or disrespected and would love nothing more than to put the boot into your skull."
11) More Tube etiquette: "Please, move quickly. Do not bring a backpack on a rush hour train. Always stand up for pregnant ladies, whether it was you that put that bun in the oven, or not... Just don't be a dick is what I'm saying."
12) On the British royals: "In a perfect world I would cheerfully see the royals' rapidly-balding heads parading on pikes through the streets whilst the hooting populace throws excrement at them."
13) On the London Eye: "Back when I used to be a carnie, in carnie that's called 'the chump heister.'"
14) On a book he finds at a curiosity shop: "Oral Sadism and the Vegetarian Personality? Now that's a really terrifying novel. I might go for that."
15) On buying dolls as an adult: "How do I explain that this is Daddy's special dolly, don't touch? It's like everything in here leads to an awkward conversation." 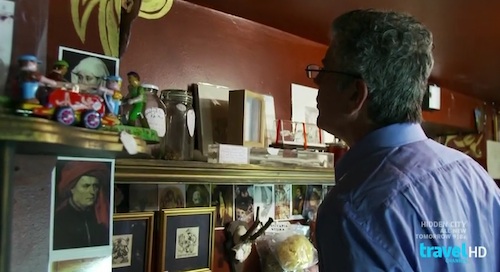 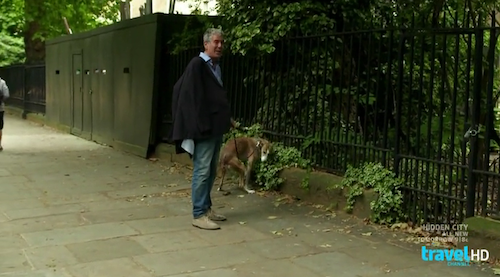 18) On Marco Pierre White's dog: "He quickly commits an offense that could get me a 200 pound fine: crapping in close proximity to the royal residence."
19) On MPW's plane of existence: "There is no escaping the full scale deliciousness on Planet Marco."
20)On Soho: "At night it's a slaughterhouse of Davidoff and jager bombs, bad behavior and public urination." 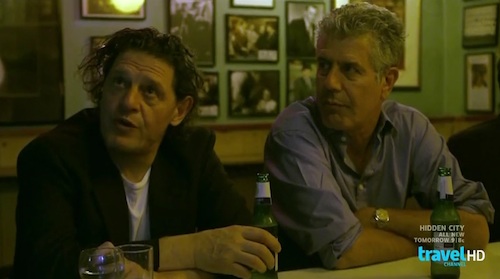 21) On Marco Pierre White not knowing about Trisha's, a drinking club near his restaurant: "You have a business like five feet away."
22) On Dean Martin vs Frank Sinatra: "Most importantly, Dino never gave a fuck."
23) On why he and MPW aren't in a photo on the wall of Trisha's: "This is the Dean Martion of drinking establishments. They don't give a fuck. You have to bring your own photo."
24) On playing tour guide: "It's appalling that an American would have to tell you about this place."
25) On what's need to cure his hangover before leaving town: "Perhaps a healthy last meal. Pork related and nutritious." 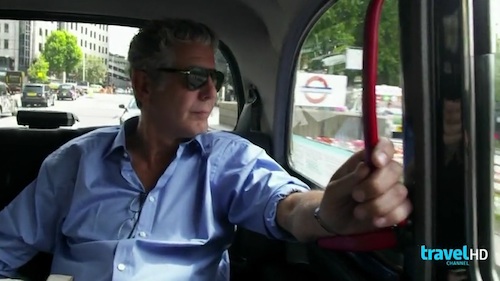