Share All sharing options for: Eric Ripert on the Cayman Islands and Le Bernardin as a 'Logical Fusion' 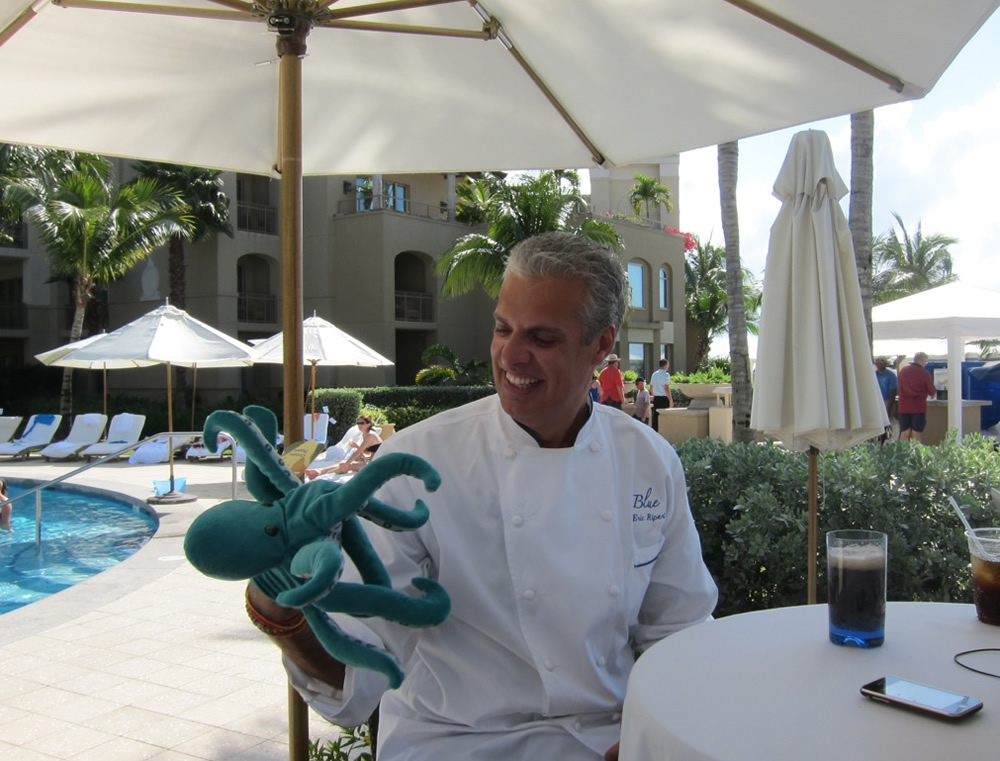 So, why the Caymans?
It was seven years ago and the Ritz was under construction. There was an opportunity to do a restaurant. I landed, they picked me up, and then put me right on the boat. They took me to Stingray City, got me drunk, I swam with stingrays, and then I came back and said, "OK, this is paradise. Done deal." And that's a completely true story.

Cayman is a little paradise. It's very easy to get good products from both Europe and America, all the employees — you've probably noticed — come from all over the world, since it's very easy to get visas. There are people from the Philippines, Nepal, Israel, France. There was therefore an opportunity to form a young team from all over. The owner of the hotel was very passionate about the whole development — it was a great location with very good service, which is sometimes a problem in the Caribbean. I had all the support in the world, which I didn't know at the very beginning. I am to this day very thankful.

The restaurant that I have here, Blue, it's basically Le Bernardin by the beach.

You mention the accessibility of products from other places, but what about sourcing from here? Can you talk a little more about that?
This is something that was very important to me about the decision. It's mostly seafood, but there's a little meat because we're in a hotel. We deal mostly with fisherman — the owner of the hotel has friends who are fishermen, and we created a network. We try to serve only local fish, but if the weather's bad, its imported. Otherwise, local.

Highlights?
Wahoo, spiny lobster, snapper. We also started working with farmers, actually. The hurricane destroyed their farms, but we're trying again. This year we have local greens, local micro greens. Also, local squash, as much as we can fruits, avocados. A lot of the salads in the hotel come from those farms. I went the other day to see one, and they have an acre of land, all of which is hydroponic.

Do you ever use any of that stuff up in New York or vice versa?
It's difficult. Mostly Le Bernardin is Northern, it's local. You know, the black bass is in the water that morning. It would have to go through customs.

You have three restaurants aside from Le Bernardin. How do you go about managing them?
I have a team that manages. There are four sous chefs — those are not junior positions. They rotate in shifts, so the chef here was at Le Bernardin three weeks ago. I visit the places, but most of my time is spent at Le Bernardin, in New York.

Going back to what you said — that Blue is "Le Bernardin by the beach" — what do you mean by that?
We're inspired by French techniques in New York, but it's a very New York restaurant. We have an address. You know you're in NY. I'm biased, of course, but it's an iconic NY restaurant. It's very New York food, as well: you get inspired by the different ethnicities, the different cultures, the different markets. You have New Jersey, the Caribbean, Chinatown, and so on. So, Le Bernardin is a logical fusion, it's not forced. If cooking is artistry, you have to be inspired by your surroundings.

Blue is Le Bernardin by the beach because the goal is to create a special experience for the client using French techniques while embracing the Caribbean. Not just Cayman, but Jamaica, Puerto Rico, and other places — we use the products of the Caribbean. When you come to Blue, you're in a luxurious environment, but it's not a copycat. You know you're in Cayman.

Michael Laiskonis just left the restaurant in New York. What's going on with that? Is there a replacement yet?
He left on the 31st. He has been amazing. We were very happy for him, but it was very emotional, since he and I had worked so closely. He has projects on his own, which I won't talk about because he can explain them articulately. We obviously have a replacement, who hasn't arrived yet. When it happens, we will let everyone know. But I don't want to jinx it. He has to have spent at least one day!

So it's a he?
You can say whatever you want! I did not confirm anything. But it's someone who's very talented who will carry on from Michael and continue on the legacy of the restaurant.

What do you have coming up?
The new Spring menu for Le Bernardin. People ask me this sort of question all the time, and often, I say it's changing the menu, which is true. I cannot come up with a book every year. I take great pleasure in what I do, mentoring my team and being a chef. I'm just starting to think about the Spring.