April Bloomfield on Her New Cookbook and Influences

Share All sharing options for: April Bloomfield on Her New Cookbook and Influences 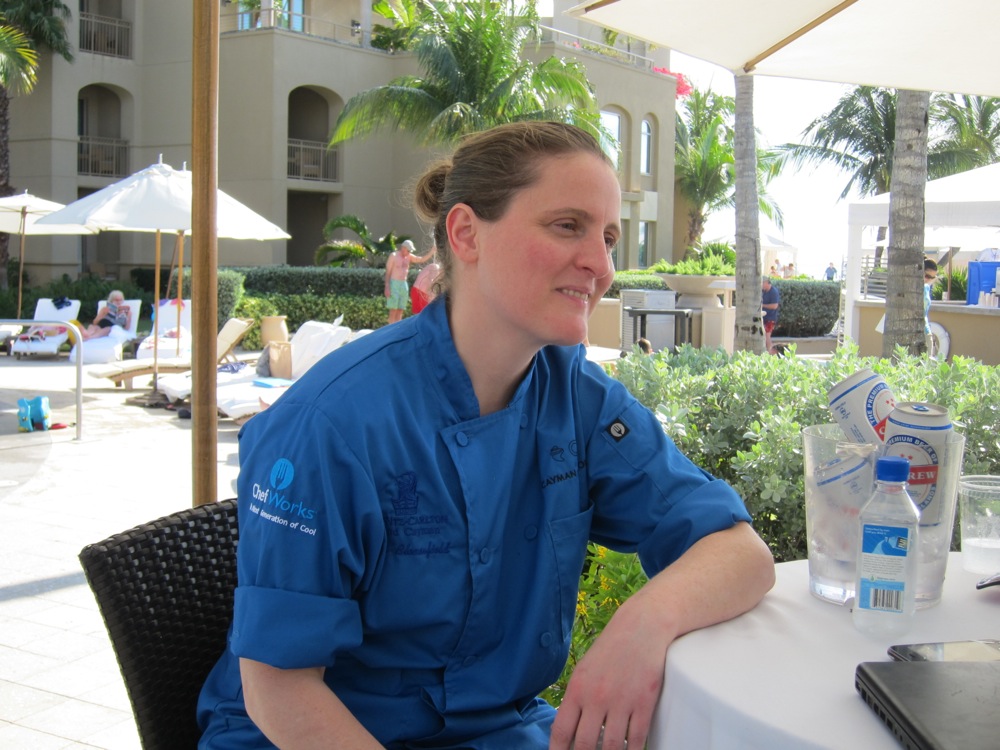 You're cooking with Michael Schwartz tomorrow right?
I met him on Thursday, had dinner at Michael Genuine. Very nice, bought me dinner.

Resonances between you and him?
There are similarities. He likes to source locally, very nice man. Food is very delicious. We both serve mussels. [laughs] Hard to go into too much detail, but it's the casual restaurant thing.

Do you do a lot of events like this?
I do a lot of charity events, but they're more New York based. I thought I'd give this a go and see how it goes. For a change, meet new people. It's important for chefs to see stuff, bring my staff have them have different experience eat different food.

So about the new space...? What can you tell us?
The space on Hudson? I mean Houston, that was a slip of the tongue. We looked at the space, but I think I am not going to move forward with that space.

So a restaurant on Hudson Street....?
No, no. You'll be the first to know.

So what's been going on at the Pig and the other spots?
Got through the busy period, winding down, recollecting. Working on menu changes. Keep pushing, moving forward, progressing. I'm taking a few of my chefs to Portugal and then after that, my book. The Breslin, mostly. The Pig's a pretty small place.

We're doing a Michelin dinner with the Pig, we're doing one on a vineyard where they breed their own pigs. I'm really excited about that, do a few cuts.

So you have a cookbook, A Girl and Her Pig, coming out in April. It's going to be about the people who influenced you?
Yeah, pretty much. I didn't want to do a restaurant book as my first book. I wanted it to be personal. Basically, I wanted it to be a thank you and a nod to the people who helped me become who I am today and the cook I am today. It has little stories filtered through various influences, some old, some new, and then some recipes from the John Dory and The Breslin, as well as some from the Pig.

There's a recipe from when I ate with Marcella Hazan and my old chef. Coming from Birmingham, I've come so far and done so much, I didn't want to forget where I came from. There's a lot of chefs that don't really acknowledge other people sometimes.

Do you see yourself doing restaurant books in the future?

I'm not ruling out that. Ken and I have talked about doing one for The Pig, and we want to do that soon. And then, maybe a vegetable one. People don't realize that I love vegetables. My favorite thing in the world is a roasted vegetable. On a deserted island, vegetables are what I'd take with me.

Who's featured in the book?
Rose Gray, Ruth Rogers, a bit on there about Fergus [Henderson]. My granddad. My nan. All that kind of stuff.