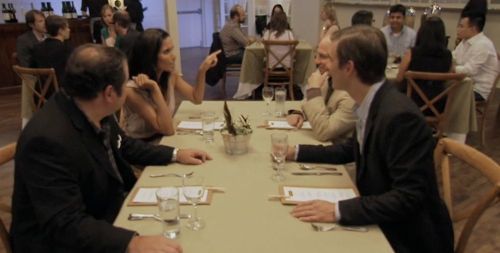 Twenty-nine episodes into the Texas season of Top Chef, the time has finally come for Restaurant Wars. As is the case every cycle, teams of remaining chefs conceive, build and execute an entirely new “restaurant” in very little time. It is the ultimate test of all the things that make a cook great: candle selection, place settings and waiter pep talks. I do actually love Restaurant Wars, and I look forward to this challenge each season. That being said, any of the chefs pretending they didn’t know exactly what was coming wears a little thin. If you are going to appear on Top Chef, you have to hope you’ll make it to the end, and therefore you have to hope that you’ll compete in Restaurant Wars. Have a couple ideas ready. Something more interesting than a beet salad with goat cheese, which is what Beverly initially suggests.

For the first time, Restaurant Wars will be a battle of the sexes. What an inspired concept, and when I say inspired, I mean that it turned out for the first time there is an even split of men and women remaining: Chris, Paul, Ed and Ty-Lor face off against Lindsay, Grayson, Beverly and Sarah. That’s all well and good, and I’m interested to see how the single-gender dynamics manifest themselves (bourbon versus cupcakes, aggression versus feelings, etc.), but the teams are told they each have a night of service to themselves. Both teams will get to dine at the other’s restaurant. After planning and shopping, the guys’ will cook the first night, and the girls’ have the second night. This was decided by a “coin toss” which is of course the fairest way of deciding anything. “You will all draw uncooked spaghetti, short spaghetti loses.” 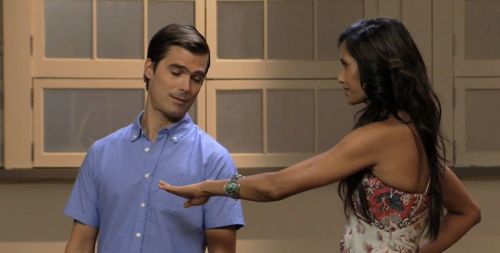 That seems exceedingly unfair to the guys, and strangely no one is shown complaining about it. Are Magical Elves producers just off-screen holding guns to the chefpesticles' heads? There is no evidence that they aren’t, so we can only assume that they are. These episodes are filmed nearly back-to-back-to-back, and the guys are still working under the sleep deficit from BBQ wars. The ladies have a whole night to dine at Chez Penisse and sleep and think. When I am tired, I get crabby and short-tempered, so I bet the ladies will be so pleasant and relaxed after their good night’s sleep. Oh, the opposite will happen? They will be the worst? Maybe Sarah and Lindsay are tired from staying up all night and brainstorming new and inventive ways to be condescending dipshits to Beverly. That would tucker me out too. 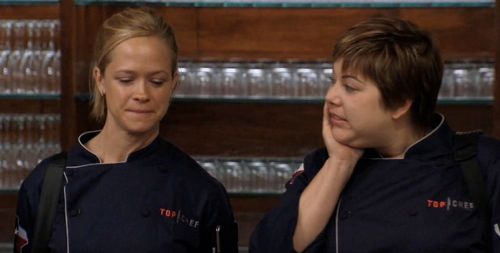 Each team must offer a three-course menu with two choices per course for 100 guests. Ed’s experience owning his own restaurant makes him a natural front-of-house person, and Paul offers up Canteen as a name. It brings to mind a watering hole, they say. Does it? When I think canteen, I think of something you find empty in the dessert when you’ve been marching for three days in the sun. Or I think of a bar in South America where you go to see a guy about a fake passport. Either way, I don’t immediately think of good food. Nor do I think of Japanese screens, which seem to make up most of the decorations both teams buy for the Palm Door space. 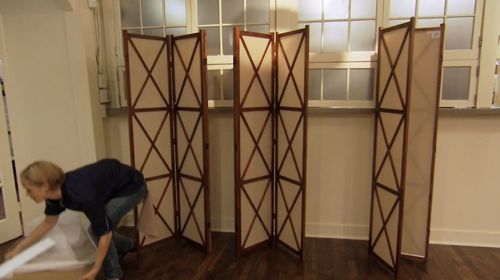 (Did anyone else think they kept saying not Palm Door but Palme D’or, like what films win at the Cannes Film Festival? I am not a major filmhead, but I would have liked to see a Tree of Life-themed restaurant. “For an appetizer, we’ve got a many-branched tree that suggest all life on Earth is connected. Your entrée this evening is the ungraspable regret of a father living in a world that’s tragically failed to live up to his expectations. It comes with parsnips.”)

Lindsay’s idea for a name is “Bushel”, and it gets tweaked to Half Bushel. I see how that name implies seasonal, ingredient-driven cuisine, but why half bushel? A half bushel is definitely less than a whole bushel. If I had to choose between a bushel or a half bushel of something, 9 times out of 10 I’d go bushel, with the tenth time being when the bushel is filled with maggots. “I only want half those maggots.” Lindsay is also nominated to take care of the front of the house, with her extensive experience opening restaurants. Even before the cooking begins, Lindsay and Sarah gang up on Beverly in the grocery store. “Beverly, are you sure you need all those limes? Beverly, put down those eggplants. Beverly, don’t eat that, that’s not food. No en la boca.” It is humiliating and excruciating to watch them treat her like a dumb child (the worst kind of child). But also Beverly should not have been sitting in the cart with her legs hanging out the front. Grayson can only look on. “I don’t think the girls really like Beverly.” Sarah is especially harsh. Remember that movie Fallen, where Denzel Washington is investigating a demon that moves from person to person by touch? When Heather was eliminated, she passed on the evil inside her to Sarah. It’s a shame. The greatest trick Heather ever pulled was convincing the world Beverly is stupid. 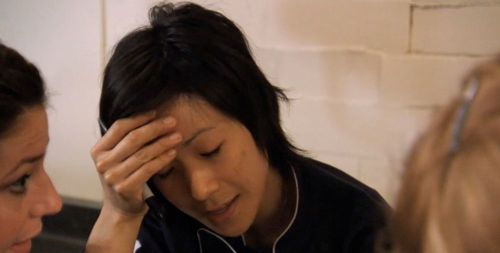 On the night of Canteen’s opening, the chefs realize they forgot to figure out how service was going to work: who is responsible for doing what on each dish, how will they be expedited, and so on. With Ed handling the customers, Paul is nervous about stepping up and taking the lead, and the food probably suffers for it. Chris Jones suggests maybe putting a pony tail on all the dishes, but straight up into the air for no reason save that it’s disgusting. Honestly, Chris is mostly over in a corner working on some weird molecular Cracker Jack bullshit. Maybe it’s a very interesting dessert, but the peanut butter spaghetti he is spending four hours making is probably not worth him not contributing to a second dish. He says, “This whole menu is like a Kobayashi Muru” and explains that thing from the Star Trek movies where Starfleet captains are presented with an unwinnable situation. One, that is a terrible reference. Shut up. Two, it’s also incorrect, because this is the exact opposite. Two teams are competing and one will win. You can win it. Maybe YOU can’t win it, Chris, but someone will. But it won’t be you. 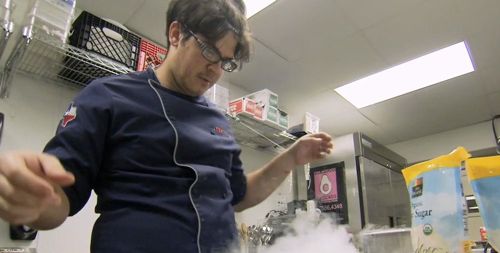 Ed keeps service humming along nicely. Diners seem happy, and Tom notices. “It feels good in here.” Sadly, the same can’t be said of the food. Ty’s Thai-style crab and shrimp service is too bland to properly honor Thai cuisine, and both Paul’s ham & egg starter and pork belly aren’t bold enough in their flavors. 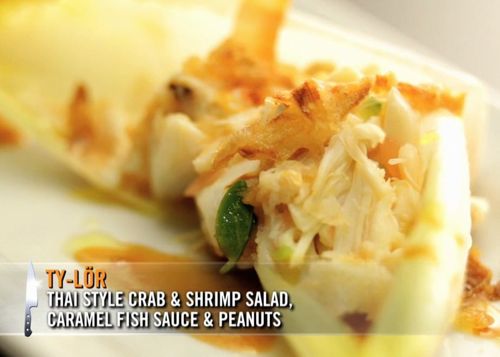 Ty and Paul collaborate on a poached salmon, but Ty fires it and fails to season it properly. Ed makes a great looking dessert, but he calls it an Almond Joy cake and infuriates Tom, apparently an Almond Joy super-fan. “Where’s the coconut? You can’t call it an Almond Joy cake and not have coconut.” When Ed explains where the coconut is, it’s not enough for Tom. Future Top Chef contestants, take note: don’t deprive Tom Colicchio of his coconut. He loves the stuff. Chris’s flavors are good, but the dish is a mess in a bowl. Considering that’s all he made, the judges seem disappointed.

The guys realize it was not their best service. Their best hope is that the girls all blow up at each other. Luckily for the guys, the girls do blow up at one another, but unluckily, it doesn’t affect the quality of their food all that much. Lindsay is a disaster at the front of the house. She seems to take her sweet time walking everywhere, even as a line forms out the door and Padma is forced to actually serve herself some lemonade. (She takes the lemonade like she’s never had to pour her own drink in her entire life.) 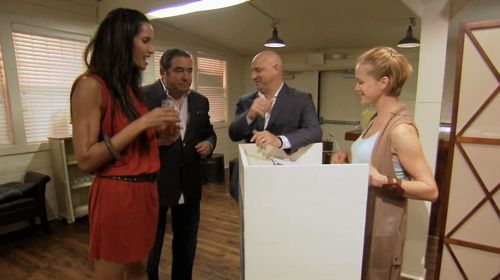 Lindsay spends a lot of time back in the kitchen criticizing people and shitting on Beverly. She loudly accuses Beverly of overcooking her dish multiple times. Grayson meekly offers up that maybe it’s not Beverly’s fault and in fact the preparation was incorrect, but Lindsay, with Sarah’s help, steam rolls over her. These two are really great people. I bet if you work for them in a kitchen it’s just a pleasure, all the time. “Man, working for Sarah. They shouldn’t call this is a job, they should call this a FUN.” The notes I took about Sarah while I watched the episode are unprintable here. I don’t even know what they mean mostly, but I was clearly very upset with her. There are lots of four-letter words and also something called a “horsebeast.” Why did I underline “condescending shit weed”? I remember now.

Despite their frustration at the time it took to sit down and the time between courses, our judges (Padma, Tom, Emeril and Hugh) really do enjoy the food. Grayson makes a peach salad with bacon vinaigrette. That combo could go both ways, but the flavors work for Chef Hugh. Sarah made a mozzarella-filled arancino, and she manages to serve it piping hot. Emeril loves it. Beverly, despite protests from Herr Doktor Sarah, makes a braised short rib with Thai basil, potato puree, apple slaw and kimchee. 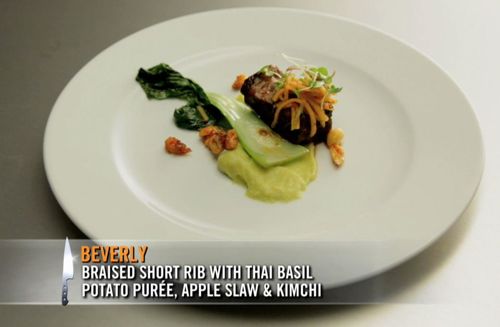 Beverly serves up Lindsay’s grilled halibut and it’s a tad overcooked. Sarah’s donuts are a little too heavy, but Tom enjoys Gray’s Schaum Torte and the champagne berry sauce that pools on the bottom.

As they say, you may be through with Sarah and Lindsay being shitheads, but that doesn’t mean Sarah and Lindsay being shitheads are through with you. Dinner’s over but they still have more to say to Beverly. She sits there and takes it because what else could she do? She’s a grown-up. Their bullying is only interrupted by being declared winners by the judges. Sarah and Lindsay are such shitheads that you get the feeling they are disappointed at winning, because if they’d lost they could have made sure Beverly went home. Lindsay even tries to take credit for Beverly’s dish. No, stop it. I felt an immense amount of satisfaction when the judges declare Beverly’s dish as their favorite. Saran and Lindsay’s faces fall. 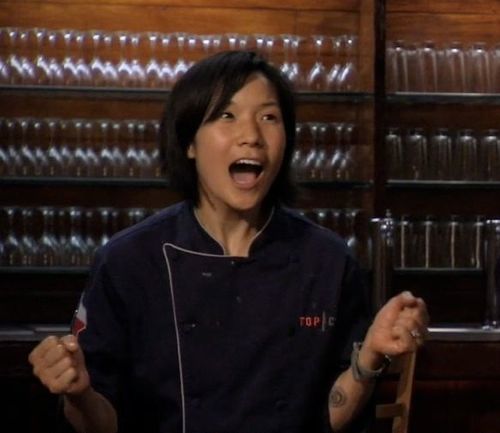 Back in the Stew Room, Sarah awkwardly says to Lindsay, “You deserved a LOT more credit than the judges gave you.” Grayson buries her face in her hands. 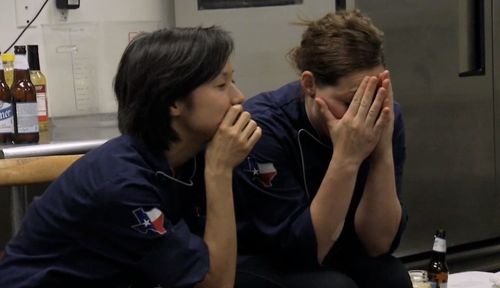 As Tom says, the guys get an F tonight from an organizational and a leadership standpoint. Paul took on too much responsibility and made a lot of mistakes. Chris hung in the background with his mediocre dessert and didn’t step up. Both of Ty’s two dishes were underseasoned. And as has been the case many times in Top Chef’s past, underseasoning can send you home, and that’s exactly where Ty’s headed. (Though not before stopping in the Last Chance Kitchen, a thing I still don’t understand.) More like Bye-Lor No-More-ing, am I right? I am wrong. 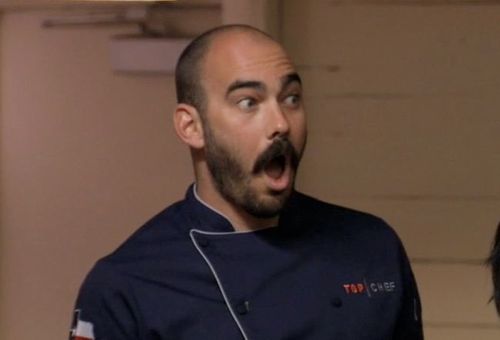