Share All sharing options for: Theophilus London on 'Bougie' Eats and Vodka Infusions 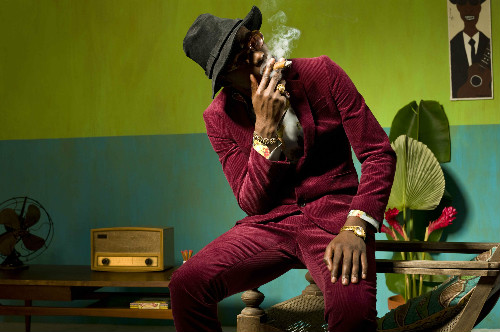 Theophilus London (b. 1987) has a knack for deftly and slyly melding new wave, hip hop, noise, and all sorts of other stuff in a way that doesn't amount to forgettable pastiche. Because of that, the young "electro-pop" musician has been able to quickly ascend the ranks and get people talking with just a few mixtapes, an EP, and one full-length album, the well-received "Timez Are Weird These Days."

In advance of the headlining tour he kicks off tomorrow, London got on the phone to talk about his eating habits, which range from swanky meals at Peter Luger's to frequent jerk chicken feasts that remind him of his Caribbean background. Also: there's the story about the time Damon Albarn flipped a shit at Nobu.

What did you eat?
Oh, man. He gave me a fried egg on top of a steak, which was cool. He made some stringy sauce, kind of like spaghetti. That place is great. Frank [Prisinzano] is my boy. I go to Supper and Lil' Frankie's all the time.

Where else do you like to go in the city?
In the mornings I like to go to Katz's, which is historic and you need to get the ticket. I get the pastrami there.

I'm going to be a bit "bougie." it's hard to get tables there, but Peter Luger's always hooks me up.

What are some of the best experiences you've had there?
I have some funny stories there, man. One time this guy that works for me wore a Chicago Bulls jersey to dinner. They told me that he had to leave or wear a kitchen shirt throughout the whole dinner. So for the whole time, he had to suck it up and wear the official thing over his shirt.

I'm not a big fan of it, honestly, but when I'm in a bougie mood I like to go to Nobu.

What do you get there?
I like to get the white fish with jalapeño — the yellowtail. Also the shishito peppers, the peppers that one of five of which is hot. They also have this steak that isn't on the menu with a spicy sauce. I love the salad with the ginger, too.

I'm always at Negril, on West 3rd. I'm from New York but I was born in the Caribbean, so I go in there to get some jerk chicken and oxtail. That's the best place to run into me.

What I really, really like when I'm in "watching NBA mode" or hanging with my friends at home is Suzie's, which is right by NYU. We order in. It's like the best spot in NYC for the wings. They're fried and amazing.

Any favorite bars?
I used to go to Max Fish all the time, but I realized that bars aren't really for me.

How come?
It's just not my vibe. I have a little bar in my house, so I just do it at my house.

So you're into making your own drinks?
Yeah, I have a couple of bottles of Vodka, some Bushmill's. I just discovered the Cristal Rosé, so I've been popping that a lot lately. I have all these Skyy Vodka infusions — passionfruit, strawberry — that when you drink the stuff you don't taste the alcohol. You just get drunk automatically. It's pretty rad.

How about places on the road or in your travels?
I'm a member of the Soho House, so when I'm in L.A. or in Berlin I'll go to the spa there and then have lunch — maybe a club sandwich or a salad. I like to keep it light. They're my homies.

Finally, do you care about the music playing when you're at a restaurant?
Yeah, I do care! I got another funny, bougie story: I was eating at Nobu with Damon Albarn of Gorillaz like two years ago. We went to Nobu for the session and, all of a sudden, some obnoxious song came on where this dude was belting harmonies and shit. Albarn freaked out. He called the manager and told him to take that shit off immediately.

What was the song?
Some rock song or something that irritated the shit out of him. Maybe it was Bruno Mars or something like that. After that they put on some cool Kung Fu music. You have to curate this stuff at your restaurant. You just can't have the radio on or not care.