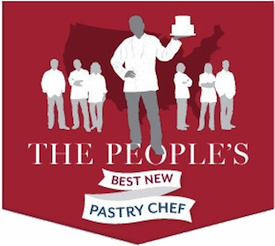 Food & Wine Best New... Pastry Chefs? That's right: the February issue of Food & Wine announces a sweet spin on the magazine's annual award for the best fresh blood in the restaurant world, the winners of which will be announced in May. Alongside the traditional editor-curated panel of winners, they will also be letting their reading public pick favorites in an accompanying online People's Best New Pastry Chef competition.

The magazine's editor Dana Cowin talked to Eater about the new program, and below explains how the judging works, why the time is right for Best New Pastry Chefs, and discusses Food & Wine's new program, Chefs Make Change.

Let's talk about Best New Pastry Chefs.
For years and years, we've had the Best New Chefs of course, but we've always thought to ourselves — when you eat out for Best New Chefs you're actually not even allowed to consider, as a judge, what they serve you for dessert. Because it's not something that the chefs themselves would have created. We always wanted to do a Best New Pastry Chefs, and this year it all came together.

Actually, Best New Pastry Chefs is a little bit different from Best New Chefs, in that there are always new chefs opening new restaurants and there are always new ideas. And in pastry, we felt over time that there were some really extraordinarily talented pastry chefs, but they didn't mint them quite as quickly as the Best New Chefs. But for the last couple of years we felt like we've seen more and more interesting pastry chefs, so we felt like the timing was really good.

We started with a group of 50 and then we sent out our team. It's been really fun, because you can go sit at a bar and have dessert. Although one person, one of the editors who traveled for Best New Pastry, she was in Texas and she didn't have anyone to eat with, she didn't know anyone in the city. And so she sat at the bar and she ordered four desserts, and she saw the look of the bartender, like "What is wrong with this girl ordering four desserts?" And she was like, "I promise you, I'm not that lonely girl who's trying to eat to solve all her life's problems. I just really like to try different pastries." So we had a team go across the country, separate from tasting for Best New Chefs, and they had some incredible, incredible dishes. We're duking it out right now.

So does it function in a similar way to Best New Chefs?
It will be similar in many ways. The pastry chefs have to be in charge of a kitchen for five years or fewer. The initial round was nominated by a cross country team, then they were winnowed down in our office when we looked at their menus and did a little bit of research to make sure they met the five year mark or less. And then the winners that we choose will appear in the May issue. So Best New Chefs are in July, Best New Pastry Chefs are in May. And we will indeed have People's Best New Pastry Chef, the same way we introduced People's Best New Chef last year.

Is this going to be an annual thing?
I would love to do it every year. We need to see how big the field really is in the end, but certainly I think at least every other year would be amazing.

And will it be a similar number of pastry chefs to those who get Best New Chefs?
It will be between five and ten. Most likely it won't be ten, again because we're starting with a smaller pool. We're looking at seven right now, but again, the fighting among the people is quite fierce. But at the moment we're looking at seven.

I think it's great for the pastry chefs who often are more under the radar than those chefs for whom they work. But these guys are super, super talented. And there are a couple of us at the magazine who have a serious sweet tooth, and I count myself as one of those. So we are indulging our own — I wanted to go and eat more for Best New Pastry than Best New Chefs.

What else is new?
Launching today, Chefs Make Change — the February issue of Food & Wine highlights ten chefs who each have their own charitable organization or one that they're so heavily identified with that it almost seems like their own. And it's a trend because chefs have always given so much to other people's charities and they've cooked the dinners and given free meals and been auctioned off, but with their increasing power and celebrity they want to have their own organizations. Mario Batali has the Mario Batali Foundation and Emeril has the Emeril Lagasse Foundation.

So in light of the trend and wanting to do something good for the world, we did two recipes from each of ten superstar chefs and that's the February issue. But the thing that's launching today that I'm ridiculously excited about is we've committed to raising $1 million for the ten chef charities. So if you go onto our Facebook page for Chefs Make Change and you an see all of the chefs and a sentence about their charity and we're encouraging people to donate. We don't touch the money, you go to the chef's own charity and donate right there.