Emeril Lagasse's New Movie Is Going to Be Really Good

Share All sharing options for: Emeril Lagasse's New Movie Is Going to Be Really Good 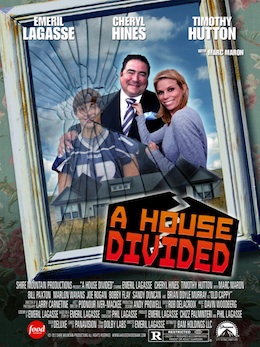 This is a totally real thing that is definitely happening: according to the press release below, Emeril Lagasse is going to be in a movie called A House Divided.

Below, a larger version of the poster — which reveals that the film also stars Bill Paxton, Marlon Wayans, and known actor Bobby Flay — and the full press release, which is definitely worth a read. (If you can't tell, this is a hoax.) 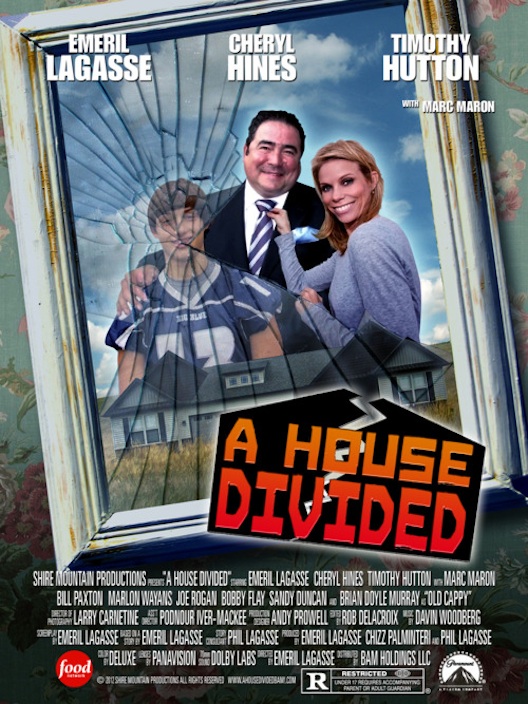 Announcing EMERIL LAGASSE’S “A HOUSE DIVIDED”
Shire Mountain Entertainment is proud to announce the 2012 theatrical film release of “A House Divided” a new romantic “dramady” written, directed and starring Celebrity Chef Phenomenon Emeril Lagasse. The film which centers around a family (The Bensons) going through a rough patch after losing a teenage son in a “random act of violence.” The film touches on issues as diverse as infidelity, abortion, religion, art and unemployment, all through the lens of wry humor and real heart. ”A House Divided” also stars Cheryl Hines, Marc Maron and Timothy Hutton.

For some, the name Emeril Lagasse immediately congers up the image of “gourmet southern cuisine” along with his signature catch phrases and influence in the cooking community. But soon, the name Emeril Lagasse will be regarded as a new cinematic force to be reckoned with. Says Lagasse “I’ve always loved film and the art of storytelling. I’ve had the idea for the script for several years but things [several hit Food Network TV shows, his own franchise of upscale restaurants, a line of gourmet food items to name a few] kept getting in my way.”

“I signed on because I said ‘F**K, at least I know the catering will be good!” riffed Marc Maron, another newbie to the big screen. “I guess Emeril had been a fan of my podcast and wanted some of that energy on set. I got to improvise, I got to play around and build the character pretty much from the ground up.” In the film Maron plays Legasse’s forever tortured and neurotic best friend and business partner.

As a directror he [Legasse] was great. And no he never asked me to “kick it up a notch.” quipped Sheryl Hines, star of “Curb Your Enthusiasm, no stranger to playing the better half. Hines typically known for comedic work relished the opportunity to take on a more serious subject matter. “I think people are going to be surprised by this one. I’m thrilled to be a part of it.”

Filming of “A House Divided” took place last May in Baton Rouge, LA as well as Culver City, CA. The film is rated R by the MPAA for crude language, graphic sex and violence.