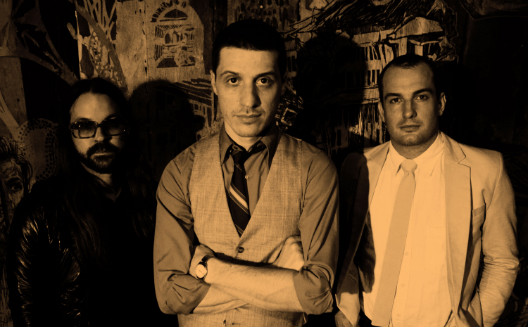 Paul Meany, lead vocalist and keyboardist of Mutemath, absolutely loves his native New Orleans. In advance of the release of the band's third album, Odd Soul, we got a chance to talk to Meany about what he eats and drinks in NOLA — both highbrow and lowbrow — what he used to eat growing up, and the few places he'll hit on the road (one of them, unsurprisingly, is Popeye's).

What did you have for dinner last night?
That's not gonna be a good way to start this! See, I'm on the road, which is about survival. I actually didn't have dinner last night. I had potato chips.

The road is tough, but there's a rule on the bus: if we pass a Popeye's, we need to stop the bus at all costs, no matter what time. That usually keeps me connected. Five Guys is another place we love.

You're based in New Orleans. What do you like to eat there and where do you like to eat it?
I've noticed that even if I spent the rest of my life going to restaurants here, I couldn't try all the great ones. So many good places. There's this wonderful guy, Tom Fitzmorris, who has a website I follow a lot for his recommendations. I try to make it a point to try a new place every other month.

Fitzmorris has that tally of how many restaurants are open in the city.
Yeah! Usually his recommendations are spot-on.

What type of stuff do you tend to like?
My favorite is creole cuisine. Any place that cooks up good southern, New Orleans stuff. That's my weak spot. My recent favorite is Brigsten's. It's kind of a special occasion place.

Any others?
There's so many great little restaurants in these small victorian cottages that were converted to business. Those are the golden places. The Upper Line is one, Dante's Kitchen another.

I recently discovered a dish called shrimp thermidor. Thermidor is a classic New Orleans thing, but I never got around to trying it. The more popular preparation is with lobster, but what I've come to find out is that if you get anything thermidor, it's going to be about the best thing you have ever had. If it's "French Fry Thermidor," get it. I'm not a chef, I don't know anything about ingredients, but it is the sauce of heaven.

What about po' boys?
I think the best po' boys in the city are at a place called R & O's.

What do you get there?
I'm always going for shrimp, but they have outstanding roast beef, oyster, stuffed crab — the thing that does it for me is the bread, which is absolutely outstanding. They balance all the ingredients perfectly. There's a lot of po' boy shops near my house, but I always drive the extra ten minutes to go there because it's always worth it.

Any other cheap eats?
Whenever we are rehearsing, we like to go to Juan's Flying Burrito, which is kind of a New Orleans/Mexican place. Absolutely astounding take on Mexican. It's not authentic, it's New Orleanized.

What does that mean?
It's hard to say. They kind of just throw everything in. The thing that we love is the Flying Burrito: it's shrimp, it's steak, red beans and rice, and it's amazing.

[My bandmate] Roy, who grow up on authentic Mexican food, since his mother is Mexican and he lived in the Valley, has a really tuned-in taste for that cuisine. And he gave Juan's his approval. That means a lot.

We did a show in Houston once, and Roy's family was coming from 5 hours south of there. They brought up Mexican food, authentic stuff from the border. I had never tried that. Keep in mind that this stuff had been driving in a car for hours, and I swear it was one of the greatest things I've ever eaten in my life.

Any favorite drinking spots in the city?
A place that I love to go is the Columns Hotel, on St. Charles. Kind of a boutique hotel with a bar on the bottom floor and a lounge next to it. It's a great hang, a great place to unwind. During the fall, it's great to go out on the porch there and have a sazerac and see cars passing.

Did you grow up in New Orleans? What did you eat back then?
Yeah. I grew up eating things that I didn't know were inherently New Orleans at the time. My family is Italian, and one of my favorite things they'd make is stuffed artichoke.

Who would make it?
My aunt was really good at it. It's a very tedious process, and she had the patience to figure it out. Every year, around October, she'd take a few weeks off of work and just make a bunch.

Any last words?
Jacques-Imo's is another place I want to mention. If there is anyone that is traveling to New Orleans, that is a place that will throw you to the deep end of it. You go there and you have to wait, but it's always great. You have to walk through the kitchen to get to the seating area. That's when you know a restaurant is pretty great. It's almost kind of cocky.