Top Chef Just Desserts, Episode 3: Sometimes You Have to Choose the Worst of the Best

Share All sharing options for: Top Chef Just Desserts, Episode 3: Sometimes You Have to Choose the Worst of the Best 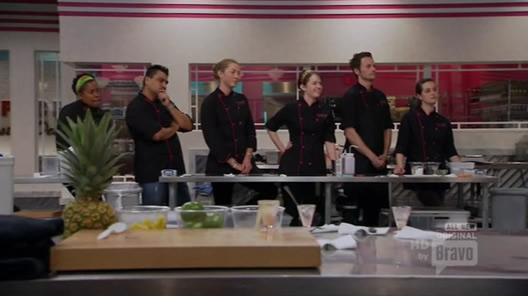 A quick observation about the opening of the show: during the announcement that the winner gets a showcase at the annual Cayman Cookout presented by Food & Wine, you see a shot of Eric Ripert and Tom Colicchio toasting each other in a tropical paradise. Eagle-eyed viewers should recognize that moment from the Top Chef All-Stars Jamaica-based finals, when we found out Mike Isabella swims with his shirt on and that Richard Blais simply can't swim. 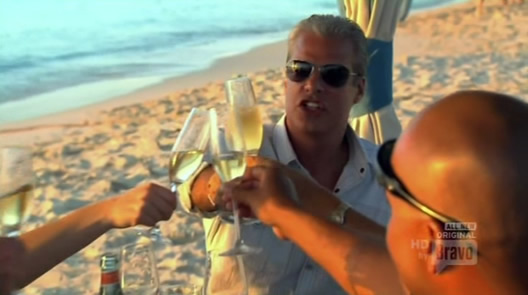 On with the show.

Ahh, crossovers, that great American sweeps-week staple. It may not have been sweeps, but it was the premiere week for the new season of The Real Housewives of Beverly Hills, that Peabody-nominated, bastion of good taste, cultural icon that Bravo snatched up from PBS after a nasty bidding war, and that's the crossover we get.

Laverne and Shirley/Mork and Mindy crossover:

Here we discover that Extra is promoting a line of dessert-inspired gum. Has anyone heard of this gum? We certainly haven't — perhaps it's because on the rare instance when we do chew gum, it's always been to get bad tastes out of mouths, not chomp on a rubber ball that tastes of a chemically-created apple pie. 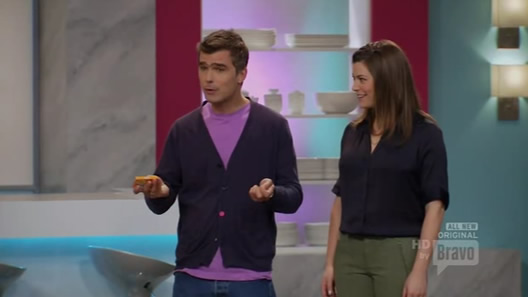 Our guest judge is Top Chef Masters contestant Hugh Acheson — we watch him sell his soul to the gods of product placement and hear him maneuver past the copyrighted word Creamsicle by saying the gum tasted just like an "orange cream pop."

Craig announces how much he LOOVVEEESSSS gum and thinks dessert flavors are "awesome." This isn't surprising given we also know of his love of Harry Potter, Pop-Tarts, World of Warcraft, America's Funniest Home Videos, and passing notes to girls.

The spin that the desserts had to fit into an array of dainty, almost dollhouse-sized, cups and plates, was cute and inspired — sometimes you just want a dessert that is as prissy as possible. But the real kicker?! The winner of the Quickfire wins $25,000. That's some sweet bank! 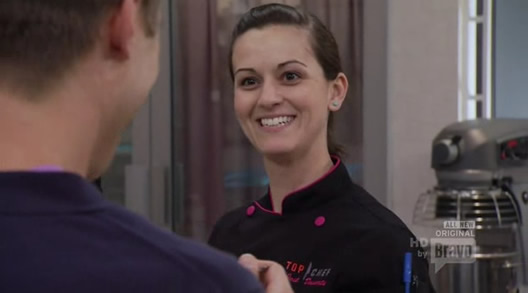 Amanda decides to make a pina colada because she wants to invent pina colada gum. Sally also does a pina colada-inspired dessert. Good thing Wrigley wasn't the one forking over the $25K — they would've pulled out their line of Orbitz gum and said "been there, done that, buh-bye." 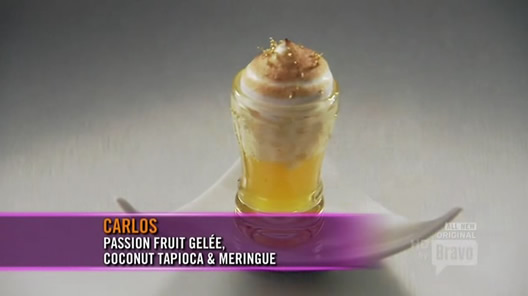 Carlos makes a beautiful (looking) tapioca dessert. Honestly this is probably the prettiest dessert from the first three episodes and finally something that starts to look worthy of the show. Perhaps the confinement of size paid off for the barbietestants?

We don't find out what bitchtestant Orlando bitched up and onto a plate — apparently he couldn't even bitch it up enough to bitch himself out of mediocrity. So far, we see nothing in him but a producer's wet dream: the bad guy to bring in the ratings. The only problem? He hasn't produced a single dish that makes us think he'll last until the finals. His schtick is getting really old, really fast.

In the bottom is Rebecca, Matthew (Hugh: "It tasted more like a granola bar but in the super sweet vernacular" – um, huh? If you're going to throw out semi-fancy words, at least let them be foreign words, that way we won't know if they're being used incorrectly or not, mmmkay?), and Melissa, who apparently likes making out with people with coffee breath since she wants to keep that sensation alive in her mouth long after the night of drunken sex and well into the walk of shame the next morning. We hope those are your socks you put on in the dark. 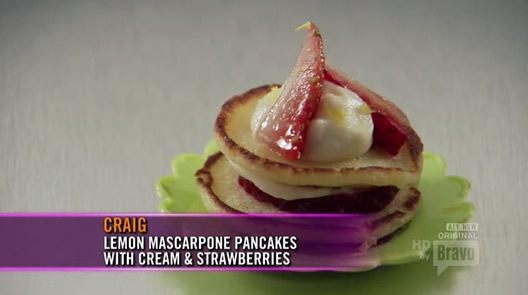 Craig, Carlos, and Nelson end up on top, and Craig wins the $25,000 for his strawberry and pancakes dessert. 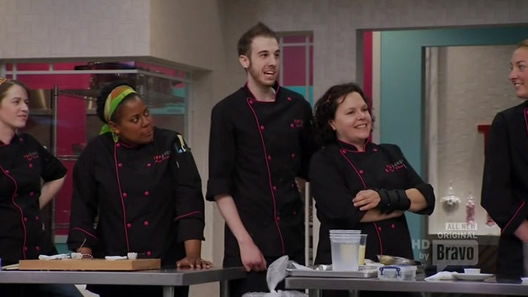 Another team challenge. This makes three in a row, and it's getting old. Craig picks Amanda to head up the other team for no apparent reason other than it's the first thing out of his mouth. We smell a crush! Melissa is pissed for being "picked last." Again. Should we break it to her that she really wasn't picked last (twice)? She wasn't picked at all (twice). Later she declares: "I am dead inside from this team (challenge) shit." Honey, we are too. However, do the words "suck it up" mean anything to you? 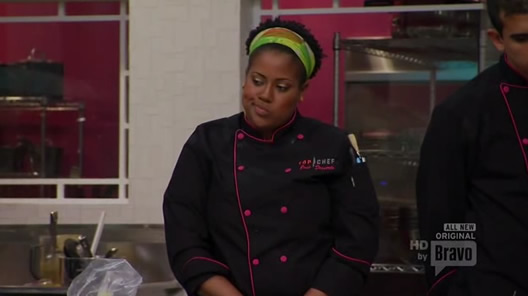 Orlando's all bitch this and bitch that about being picked for Craig's team. Dude, didn't you pick HIM last week? Whatevs. 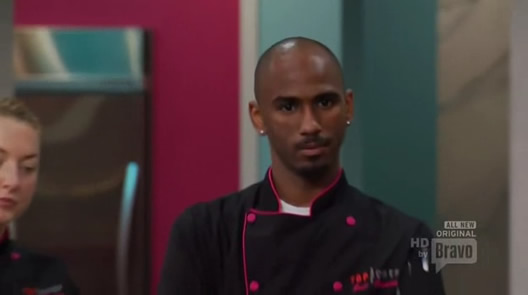 And now the crossover officially begins and out walks Dr. Evil from TRHOBH. The challenge: create a dessert presentation with up to six desserts for Dr Evil's wife at a blah blah blah party for blah blah vand der blah. 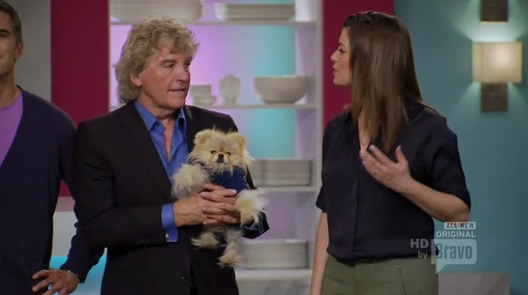 The pinktestants interview Dr Evil and we find out his wife loves pink, fresh cut flowers, and that it's a rat he's carrying around. When you think pink there is only one thing you should think. It's not desserts — it's this:

There isn't a show on TV we despise more than the Real Housewives series. We'd rather watch Storage Wars or Hillbilly Handfishin'. We have no idea who any of them are, what their names are, nor do we give a discarded implant — so we turn over comments for a moment to Doug's mom. From an email this morning:

You should have had plenty to comment on the week's Top Chef: Just Desserts. I only watched a bit, and I was shocked to see housewives make an appearance - the women with their bulbous, botox-enhanced lips and hair that is constantly being caressed as though it was their blanket or binky of childhood. I had just seen them on their own show and the guy with the obnoxious dog was letting it drink out of an expensive water glass at a dinner party at one of the other housewive's over-the-top mansion. The flower arrangement was beautiful, but cotton candy? Come on. I didn't stay tuned to see who won. Toddlers and Tiaras stole my attention as those obnoxious mothers tried to make their little girls into personifications of themselves. Parents Magazine should go on record to try and ban that show. Child cruelty. What a fun evening! 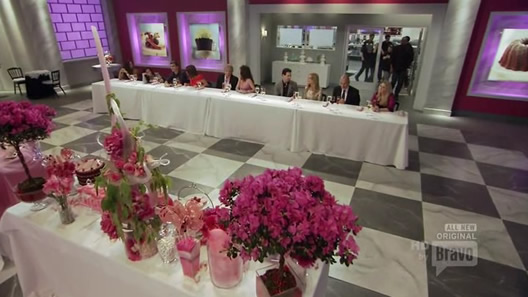 Chris mentions the need to have their table adhere to the high standards the housewives have, and to prove how high their standards are we even get to see one fellate cotton candy on camera.

At the commercial break Amanda's team seems in the weeds, but after the break they have their act together and pull out the win. Craig's leadership skills come into question because instead of, ya know, leading, he just ran around asking what he can do to help everyone. Craig, rule number one: demoting yourself to sous chef isn't how you step up and lead a team. 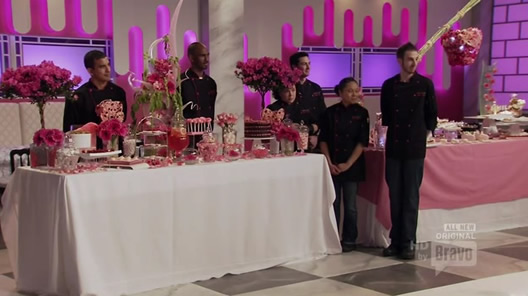 The tables look pretty great – even if Craig's team's table is dinged for being more of a sweet sixteen birthday party table than sophisticated. "The help" all end up presenting some pretty great desserts. Gone were the cake disasters from the previous episode. Most looked and sounded delicious and impressed the Vandersilicone. 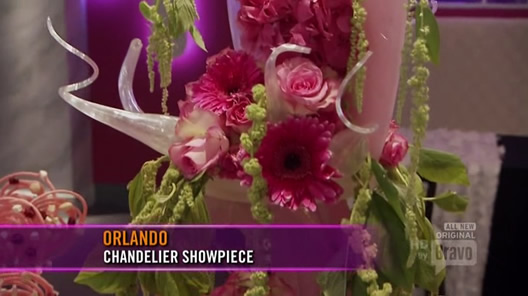 Rebecca gets the best line of the night by saying Vanderimplant is her favorite "character" on the show. Unfortunately she couldn't stop Orlando from going gaga and tossing rose petals all over the table, and their teams flunks out. (NOTE: Craig says "tablescape." Sandra Lee alert!) Ultimately Nelson ends up going home because of his melted and remolded white chocolate lollipops and cotton candy, but not before Craig gets a reminder that had it not been for his immunity, he would've gotten the boot. 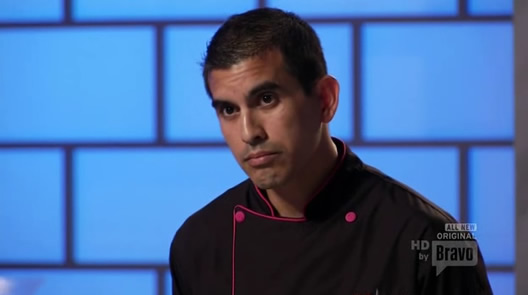 Just when we thought we could get through an episode with very little of bitchtestant Orlando, he has to go off monologuing about everyone just backing the fuck away from him because he's there to win. Good luck with that. Even if you pull it out and take the grand prize, whatever you cook up will always taste sour to us.