Welcome to Vintage America, our column on the history — and future — of American wine. Every week Talia Baiocchi, author of the Decanted column on Eater NY, takes a look at winemaking from Virginia to Texas to California, to uncover the people, events, and trends that have made America one of the most dynamic countries in the world of wine. 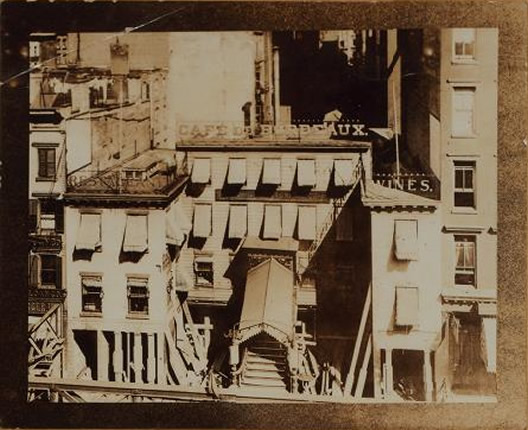 It's the year 1900. China's Boxer Rebellion heads for Peking (Beijing) killing Christian converts, Western diplomats, and civilian ex-pats. Meanwhile, back in the states, Carrie Nation (aka "The Bar Room Smasher") continues her Temperance Movement, destroying some 25 saloons in Kansas with her infamous hatchet. And, across the pond, The Michelin Guide is published for the first time.

As for wine, the market continues to open up and—in relation to the wine lists we took a look at from the previous century—producer and place become of importance to the consumer. Two very progressive lists, one from Restaurant Martin on University Place, and the other from Café de Bordeaux up on 28th and 6th Avenue, are peeks into New York's savvy turn of the century wine scene. 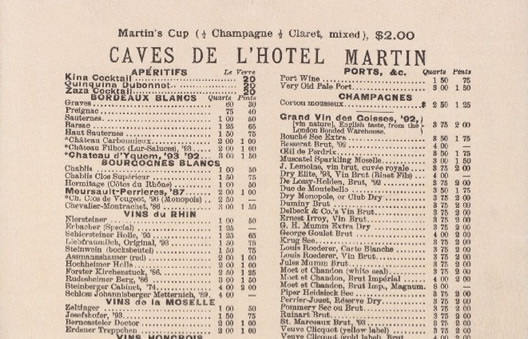 There's little information left over on Restaurant Martin, but by looking at the menu we can at least deduce that we're looking at a wine list attached to a buttoned-up brasserie. A cute detail: there were only about 4,200 cars on the road in the U.S. in 1900, thus horse-drawn carriages were still the norm. An advertisement for "parties wishing for carriages with reliable drivers" is printed on the menu. After one too many quarts of 1892 Musigny, some turtle soup and a partridge, that number might come in handy.

As for the wine list, we find even more terroir specific details than what we saw just 4 years before at Savarin's Café. Here you have listings for specific Burgundy vineyards like Meursault-Perrieres (1887), Corton Clos du Roi (1887, 1893), Volnay Santenot (1892), and so forth. With the exception of a few (notably Dubault Blochet, then owner of Romanee Conti at the time) the Burgundy selections are not listed by producer, as is the norm for Champagne and Bordeaux here.

Fetching the highest prices in the Bordeaux category—each at $5.00 a quart—are Chateau Mouton, Palmer, and Lagrange. (Also, Chateau Margaux is listed at a mere $1.25/quart, down from $8.50 at Savarin's just 4 years ago.) It's important to note that none of the Bordeaux listed by vintage is less that 10 years old, as bottlings were typically held back longer than the now 3 year standard release time.

Champagne is still dominant here, and far more detailed and house-driven than the lists from the previous century. Moet, Veuve, and Roederer dominate, but we began to see houses like Piper-Heidseck, Ruinart, and Krug pop up with more frequency.

Sherry and Madeira collections continue to shrink and the wines of Germany continue to show their relevance behind the classic wines of France. And, lastly, mineral water seems to be something that begs connoisseurship, as 10 different waters from all over the world own a considerable bit of real estate. 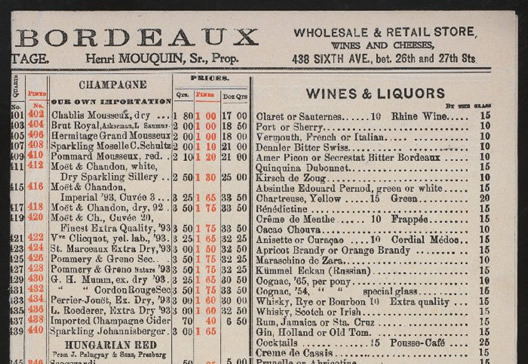 A progressive list here from Café de Bordeaux, which existed until at least 1920 on 6th Avenue between 27th and 28th. The restaurant also appears to be an importer and a retailer (ah, the heady pre-Prohibition days). What we end up with is a stunning two page wine list that is long on Bordeaux, but also gives eyes to Hungarian wines (then linked to Austria), which see the largest representation outside of France.

Second to Hungary is Germany, followed by Switzerland, which seems to offer the best value on the list with just a few wines breaking $1.00/quart, including both red and white Neuchatel. Italy gets a rare shout out with a lonely listing for Chianti, at a cool $1.00 per quart, no vintage listed. The Loire Valley also gets a shout with one listing for an 1893 Vouvray.

Here we also see a distinction between Chateau bottled wines and those bottled at the store/restaurant, which suggests that a good portion of the wines were shipped to the states in bulk or cask and dispensed at these facilities. They are generally less expensive than the wines bottled at the Chateau. Under the "Chateau Bottled" heading the wines are organized by vintage (a rarity) and we see listings for a few right bank wines, including Petrus (1887) and Cheval Blanc (1888), which were both practically endangered at the time.

This is a hell of a wine list and one that shows just how advanced the American thirst for wine was at the time. Hard to believe that just 20 years later, Prohibition would force our wine culture down the drain.