Share All sharing options for: Vegetarian Yelper Drops Two-Stars on The Salty Pig 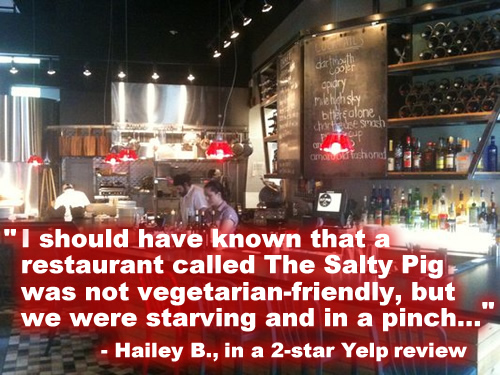 The website Yelp is the home of fake reviews, insufferable illiterates, complainers, reviews of un-open restaurants, and degenerate, frenzied Elites. It is also the home of vegetarians routinely down-ranking restaurants that serve almost exclusively meat. Today Eater would like to introduce you to Hailey B., Yelper, vegetarian. She is also a "Pool connoisseur, Vegetarian knowledge bank, Wine lover, Yogi." On a recent visit to the Boston restaurant The Salty Pig — which does house-cured meats and charcuterie boards — Hailey B. was not a happy camper. In her two-star review, she wrote:

I should have known that a restaurant called The Salty Pig was not vegetarian-friendly, but we were starving and in a pinch...

My boyfriend said that he enjoyed his flatbread, but it wasn't great. And I had a grilled cheese that just tasted weird.

Perhaps this is a good place for big pork lovers, but it wasn't for us.

This is something that happens again and again on Yelp: Vegetarians — or anyone with a food hangup of some sort — giving negative reviews to restaurants that don't have menus that cater exactly to their needs. Hitting a meat-focused restaurant with a two-star review because the menu options were too limited for vegetarians? Because a grilled cheese sandwich tasted "weird"? That's par for the course on Yelp.