Ferran Adrià and José Andrés in DC: The 10 Best Quotes

Share All sharing options for: Ferran Adrià and José Andrés in DC: The 10 Best Quotes 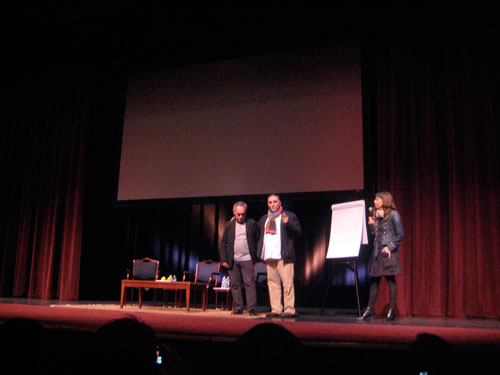 Ferran Adrià was in Washington, DC, last night on the second stop of the U.S. tour for his new cookbook The Family Meal: Home Cooking with Ferran Adrià. With the help of an easel pad, a translator and his old friend José Andrés, Adrià spent the evening explaining creativity in cooking, why he decided to close elBulli, the goals of the elBulli Foundation and, oh yes, his cookbook. Though the evening was billed as "Ferran Adrià in an evening in conversation with José Andrés," make no mistake that this was Adrià's night. Andrés served as comic foil, pear-peeler and page-flipper — plus he delivered a few heartfelt speeches about the imprint his friend has left on the culinary world.

2) Adrià on when people just don't get it: "A person goes to Minibar restaurant — not ElBulli — and they get an asparagus sorbet. They ask, 'Jose, what are you doing? This is scandalous. Asapargus are great whole as they are.' That same gentleman that evening has dinner somewhere else and has a strawberry sorbet. And he goes, 'This is what cooking is about.'"

3) One of the more interesting demos was a comparison of the evolution of cooking to the evolution of the miniskirt: Adrià: "If it hadn't been for the first omelette, I wouldn't have been able to do the other thousand omelettes. Now I need a girl or a woman in a miniskirt." Andrés: "This is a conservative town."

4) Andrés on the language barrier: "He's been 20 years trying to explain creativity and he was explaining creativity in a very strange way. It's very funny because I've been translating for him for the last 20 years when I could barely say two words in English. Finally now that I can say some words, now is when he brings this amazing translator. That's why no one could understand creativity."

5) Adrià on closing elBulli: "We knew the time would come that we'd have to step down because we'd been winning Oscars for 15 years. I discovered this one day when I got home, my mother was reading a newspaper and she said, 'Again? What are you doing in the papers?' And I realized if my mother thought that of me, what would my enemies think?"

6) Andrés on his love for Adrià: "This guy is at the top of the top. Usually when people are at the top of their game, it's at this moment in life when you are willing to give everything you have. Warren Buffett, Bill Gates. It's great. But one of the things that has made this man unique — and I think sometimes it's a story the press has not been able to tell — is that 25 years ago when only maybe a few of us knew him, he was also a giver. And to give what you have is great. But to give everything when you have nothing, that's even more amazing."

7) Adrià prefers cooking for two: "Why are most recipe books made out for four people? I don't understand."

8) Just in case the audience was disappointed, Adrià covers his bases: "I'm sure you were expecting some liquid nitrogen elements, spherification, deconstruction. We'll do that when I come back next time."

9) When Adrià advocated to invite the United States to a Spanish food conference back in 2005, it didn't go well: "People said I was a bit mad. 'What are they going to bring? Hamburgers?'"

10) Andrés responds to an audience member who asks Adrià for his opinion of how Americans eat: "You know you are a question terrorist, right?"