Share All sharing options for: Bitters: The Bartender's Spice Cabinet 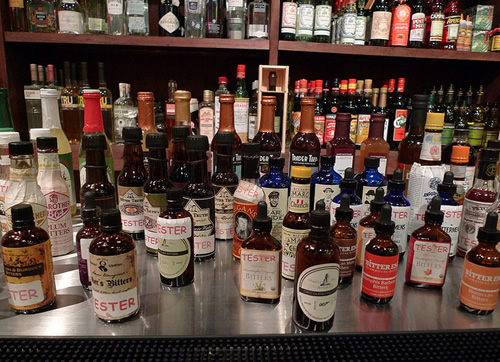 Lemon, peach, chocolate, Creole, Burlesque: The continuum of boutique flavors now available may cause the average home bartender to take pause and question what happened to plain old Angostura. Even Angostura can be puzzling to the consumer trained only in the art of gin-and-tonic or whiskey-neat.

When I bought my first bottle of Angostura, I was 21, living in Miami Beach and desperate for a food and cocktail culture like the one bubbling out of New York where Dave Wondrich's Imbibe! was the toast of the town and a little cocktail bar called PDT had just opened. The Angostura bottle's yellow cap was dusty and the white wrapper a bit tattered, but I knew it had a place on my home bar. I just didn't know where.

Defined, cocktail bitters are concentrated flavors usually conveyed through a base of alcohol infused with herbs, spices, peels and extracts. Cocktail bitters are technically non-potable, meaning they're not meant to be consumed on their own so they can be sold outside of liquor stores. Some bartenders have turned the non-potable notion on its head and created cocktails using bitters as a base. Kirk Estopinal, of Cure in New Orleans, created the cheeky Angostura Sour using a full ounce and a half of the stuff. There are also potable bitters, like Fernet Branca or Averna, meant to be consumed on their own or in quantities larger than a dash or two. 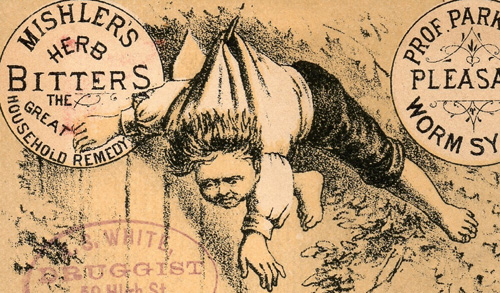 A quick bit of history. Like much booze, cocktail bitters started as medicinal tinctures whether procured from a doctor soaking herbs for stomach ailments or roving snake oil salesmen stewing up "magical" cure-alls. Eventually, they found their way into the hands of cocktail bartenders like Jerry Thomas in the late 19th and early 20th centuries, and then fell prey to Prohibition. The two brands to survive the hiatus were Angostura and Peychaud's, each a supporting ingredient to classics like the Old Fashioned and the Sazerac, respectively.

"If you have to have one bitter in the arsenal, it's Angostura," says Avery Glasser of Bittermens. "It's the most classic—like the black pepper of the cocktail world." As a rule, bitters add depth and balance to a cocktail and connect or smooth flavors together. "The next flavor you should have is orange bitters," counsels Glasser, "but it's when you get to the third bitter that you can start to have fun." Avery and Janet Glasser, now based in Brooklyn, began making bitters in 2007 with flavors that hadn't been commercially explored like Xocolatl Mole which they recommend using in dark spirit based cocktails like aged tequila, rum or bourbon. Eventually they worked with New York bartender Phil Ward on a grapefruit bitter, and Brian Miller on ‘Elemakule Tiki bitters. 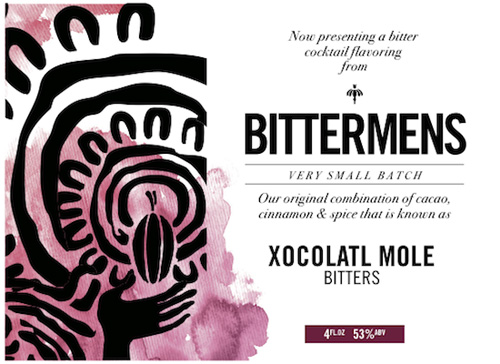 The Glassers have made Bittermens their passion and livelihood producing everything from shrubs to liqueurs and opening bitters bar and general store Amor y Amargo in Manhattan. It seem they're having fun experimenting, but they've also become very serious about the profession. "There are a lot of people making seasonal bitters," explains Avery, "hobbyists who say, ‘Oh wouldn't it be fun to dot-dot-dot?'" Well-established on the bitters scene, Bittermens shouldn't worry too much about competition, especially considering their flavor specialization, but Glasser has a point.

Damon Boelte, Brooklyn bartender and bar director for Frankies and Prime Meats, agrees with Glasser from a practical perspective. "There are some companies that come around trying to sell seasonal bitters, which is a nice idea, but if you put a cocktail on the menu with an ingredient in limited supply and it runs out, you have a problem." Boelte also understands the plight of seasonal bitters producers. "I make Buddha's hand bitters for the bar, and I have to buy twenty cases of the fruit at a time to meet the amount of bitters we'll need for the rate of cocktails we go through."

To give an idea of the consistency a national bitters company might need to provide, Bittermens produces 2,000 to 3,000 bottles of bitters a month. These batches are still considered relatively small and modestly distributed in comparison to something like Angostura. "The problem we see in the bitters world is entrants making a hundred bottles at a time and not providing consistency. I don't know if we need that many new flavors or vendors."

Of course, there will always be companies vying to provide new flavors. Joe Keeper of Bar Keeper in Silverlake, Los Angeles is delighted when he hears about passionate amateur producers. Handing me a pharmaceutical dropper bottle labeled ‘Miracle Mile Forbidden Bitters' Keeper exclaimed, "I tasted Louis [Anderman]'s bitters and kept encouraging him to perfect them. Now he's making chocolate chili bitters and these Forbidden bitters, which reproduce the flavor of tonka beans almost perfectly." Keeper stocks a large variety of bitters at his boutique from larger producers like Fee Brothers, mainstays like Scrappy's and the most obscure of Anderman's concoctions. 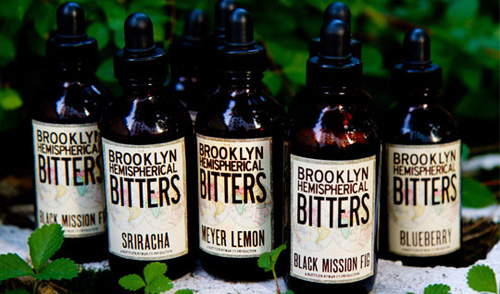 If for some limited production flavors are an inconvenience, for others it's a boon. Seasonal producer Brooklyn Hemispherical's staples shift according to market flavors, and they pride themselves on the varied aspect of their product. "We're trying to think of our batches as vintages," says Jason Rowan, one half of Hemispherical. "We did a bumper crop of strawberries this year and are hoping it lasts through the winter. Strawberries will be different from one year to the next, so each year's bitters will taste different. We're trying to make this a positive thing." Though doubling production every month, Rowan and partner Mark Buettler are happy to deal in the highly esoteric. Recently the team produced a batch of Icelandic Bitters in partnership with Reyka Vodka numbering only 32 bottles of clean, cool Icelandic moss infused tincture.

On the most minute end of the spectrum, Hella Bitter, also based in Brooklyn just concluded a Kickstarter campaign to raise money for a bitters and soda cart on the heels of requesting Kickstarter funds to produce 50 bottles of citrus bitters. Both runs successful, the group plans to expand production, and is using social media to garner new and younger audiences to the bitters movement. "Twitter and Facebook are going to be a large part of how we reach people, especially because Kickstarter was so successful," says Eduardo Simeon who is partner in the company alongside founder Benjamin Ahr Harrison and Tobin Ludwig. Their line, which includes Kumquat-Vanilla and Wormwood, can be found at The Meadow and Whisk in New York. Growing up alongside practiced and profession protective companies like Bittermens, Hella Bitter is no less sincere in their endeavor. As Simeon expresses, "We want people to understand how bitters work, and to use them regularly in their bars at home. You don't have to be a fancy bartender to do that."

Leslie Pariseau is a writer in New York City. She prefers her martinis with bitters and her friends and lovers without.