Share All sharing options for: Holy Ghost! Are Addicted to Williamsburg Restaurants 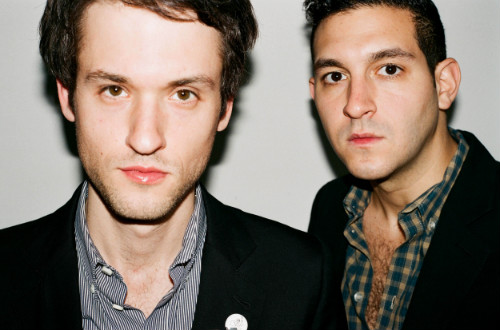 Holy Ghost!, the duo composed of Upper West Side natives Nick Milhiser and Alex Frankel, peddles out a brand of electropop that puts the group in the company of bands like Chromeo, Cut Copy, and erstwhile white disco giants LCD Soundsystem; put simply, the dudes have an uncanny ability to embrace schmaltz and visceral groove in tasteful, fun ways. Next month, they'll embark on their first headlining tour of the U.S., in support of their eponymous debut album, which was released back in April on — no surprises here — DFA.

I got a chance to talk to Milhiser and Frankel about their favorite restaurants, and it turns out that their focus has shifted from upper Manhattan to a very specific area of Brooklyn.

You both grew up on the Upper West Side. What did you eat back then?
Nick: Both of our parents are pretty good cooks. My mom is an excellent cook. We didn't eat out very much, and I guess at the time, your take out options in the city were not what they are now. If we ate out, it was Chinese food or pizza. We ate sushi occasionally, because raw fish was the "foodie experience" of the 80s.
Alex: I'm Jewish, so the big meals were for holidays. My grandmother's mean brisket. Years later, in the 90s, my mom started getting into cooking. We were three boys, so we always wanted meat. The big meals were based around meat.

What are some things you remember?
Nick: My mom is an excellent cook, and so is my dad, though he doesn't cook as much. My sister was a picky eater. Until she was 11, she only ate plain pasta. But I remember that my mom made these amazing pork chops — super simple, with thyme and garlic. Incredible meatballs, too. It was just super simple. I was definitely spoiled, because when I moved out I realized that to eat that well I had to do it myself or it would cost me a lot of money.

And these days, do you eat out a lot?
Alex: We eat out a lot. Before you called, we were talking for about fifteen minutes about the state of Williamsburg restaurants. My brother is a cook.

At Marlow and Sons, right?
Alex: He was cooking in the kitchen there for a while, then at a place in the West Village. But between him and our friends that cook at Marlow and at Diner, and then our good friend Justin works at a wine shop called Uva, where my brother also cooked, everyone eats out a lot and talks about it a lot.

What are some of the places?
Nick: We both eat at Marlow and Diner probably more than is healthy. I can't count how many meals we've had at those two places.

Alex: I was at Diner two nights ago, and we had fried green tomatoes with ricotta for an appetizer, then for an entrée guinea hen that was kind of like a coq au vin. Really good. A place just opened up called Lighthouse, which is on Grand. It's not experimental. It's Israeli-owned, and they just do really good grilled meat and fish — very delicious. Roberta's is really good.

But the wait is nuts.
Yeah, and after that Times review, crazy. I also went to a new, really good place called Masten Lake on Bedford. Super simple, super fresh. They have a really delicious appetizer of sliced apples and goat milk. I highly recommend it. I was surprised by how full it was for something that had just opened. Great wine selection, too.

Do you ever venture into Manhattan?
Nick: Some. I'm actually constantly talking to my girlfriend about how embarrassingly little we know about restaurants there. When we're hungry in Manhattan, most of the time we come to the conclusion that maybe we should go back to Brooklyn to eat. I wish I could remember the name of a Japanese place on West 4th and 6th Avenue where we had an amazing Japanese meal.

Really is, and the chef is kind of a character. What did you eat there?
Nick: My dad and I just got a bunch of sashimi and just kept ordering. Super, super fresh. There used to be an amazing place on Great Jones called Hideh that for reasons I will never understand didn't last. That was the last place I could think of in the city that I've had unbelievably fresh fish. All the sushi tasted wonderful.

Any other spots?
Alex: We've been going to the Great Jones Café, actually, since we're buffalo wing nuts. We're usually purists about it, no fancy wings allowed, but the buffalo wings there are great. They don't serve them with bleu cheese, which would normally be a deal breaker for me, but they are ridiculous and addictive, to the point where I think Nick's girlfriend got the sauce to go last time.

Nick: The last time, we ordered three side orders of the sauce... to go.

Nick: My girlfriend lives in Tribeca, so we go to the Odeon a lot, which is consistent and good.

What about food on the road?
Alex: That's the most important thing when we're traveling. Two hours or earlier before we get to a town, everyone pulls out their devices and goes on Yelp to find the best local food. That's the highlight of the day — hopefully getting a good meal.

Any memorable experiences?
Alex: One place that comes to mind is in Dallas, Off The Bone Barbecue. Phenomenal We've been to a million barbecue spots traveling through the south and across the west, but that place is nuts.

Any other spots?
Alex: The way we tour, we're so pressed for time that it's pretty hard to get a good sit-down meal in. More generally, a recent discovery we collectively made as a band is that no matter where you are, it's easy to find a decent Vietnamese place — a decent bowl of pho. So, we eat an enormous amount of pho. Easy, cheap, quick, delicious, and not super heavy, and you can get it pretty much anywhere in the world. A nice alternative to pizza or hamburgers or the stuff you usually eat in a rush.

Do you guys care about the music people play in restaurants?
Alex: I actually do care. I was at the new La Esquina last night, and they had a DJ at the restaurant. I obviously DJ for a living, but I don't really need a DJ when I'm eating. I find it really distracting and kind of overbearing. At the same time, though, Marlow always has the best music playing.
Nick: I find myself asking who ever's working behind the bar at Marlow what's playing way more often than I do when I watch other people DJ.

What are some standouts?
Nick: I was just there, and they were playing this Bobby Caldwell record that I had, but I hadn't listened to it in years and couldn't remember the name. It was "What You Won't Do For Love," a heart-shaped record. I love it.

Alex: If you go there for late dinner, the music gets progressively louder as the staff gets drunker. It actually can work really well if you go around 9:30. By the time you're done at 11, it kind of transitions into a bar scene. Before you know it, it ends up being 3 AM and you're dancing on tables and being stupid.