Hooray For Earth's Noel Heroux Is OCD About Coffee

Share All sharing options for: Hooray For Earth's Noel Heroux Is OCD About Coffee 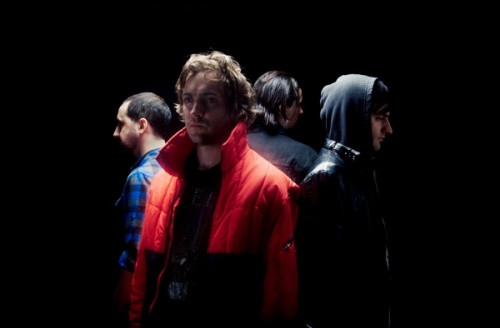 The New York-based band Hooray For Earth has, to put it very lightly, been picking up serious steam since earlier this summer, when their full-length record debut, True Loves, was released. Most reviews seem to suggest that, even with Passion Pit and MGMT around, the album proves that there's still room for damn good synth pop. Yesterday, I had a chance to talk to frontman Noel Heroux about his favorite places in New York, his experience at a picturesque restaurant in Chianti, and his love for cheesy music in restaurants.

What did you have for dinner last night?
Last night I had a pho with vegetables and a Tsingtao.

Where?
We played the first show of our tour last night in Boston. I think the place was called Le's, in Austin, Mass.

Wilco played Boston last night, too.
No shit. Half of my friends were like, "Na, man, can't come to see you. We're going to Wilco."

You're based in New York. What do you like to eat there?
It's endless here. We go to this little spot called Pepe Verde on Hudson Street a lot. It's super cheap. You walk up to the counter, order your food, and they bring it over to you. Not really a waitstaff kind of thing. It's always so good and chill.

What do you get there?
I always get a fettucini porcini mushroom and cream sauce situation, and m'lady always gets the chicken milanese.

Any other places?
There's an awesome little Italian spot called Tanti Baci on West 8th Street. They have homemade pasta, and that's another one where we always leave happy.

Another place? Dunkin' Donuts. I also get frittatas at a cute place called Chow for Now. And Ippudo, the noodle shop. The wait is pretty consistently insane, but we've been there twice and it's totally awesome.

Do you remember what you got?
I totally don't remember. Some ramen thing.

And then I have to mention Joe for coffee, since I hit that pretty much every day.

How do you like your coffee?
Every couple of months I kind of like switch. I'm a bit OCD. "Oh, I think lattes are making me feel weird everyday, so I'm going to have to switch to black drip coffee," and then in a few months, "black drip coffee has been really freaking me out, I'm going to have to switch to espresso." But it all works there. You can't get a fucked up coffee.

What about abroad, either on tour or on your own?
I just got married and we were in Italy for ten days. I can't believe the food that we ate the entire time.

Please tell me about it.
For the sake of brevity, we spent a few days in Chianti, in the mountains and the hills, and we were driving near the Ponzano area and we saw a little restaurant on the edge of a hill. We pulled in, since it looked really cute and was super cheap. They had a homemade tagliolini with truffles. I read it really quickly and thought it would be a truffle sauce or a truffle oil, but what we ended up getting was a plate of pasta drowned in shaved truffles. It was only 10 Euro! A few days later, in Rome, that same dish was going for 40 Euro.

This place was on the side of a mountain basically, with a ridiculous view. My wife ordered pici, a Tuscan pasta that's super thick, in a perfect, simple tomato sauce.

What about memorable eats on the road, both good and bad?
The most surprising thing is that whenever we're in Toronto we find great sushi.

We found a barbecue place in Arkansas, right on the highway. It's called Bowden's. It was some dude and his wife doing barbecue. Plastic tablecloth on a metal fold-out table with paper plates and water or a can of soda as your drink option. The ribs were insane.

The worst thing is eating out of rest stops constantly.

What do you even get?
The only healthy thing you can do is order the little salads they have and not eat the dressing. Or a banana.

Do you care about the music restaurants play?
I tend to like restaurants where I don't know any of the music. I can totally get down with the cheesy, generic mood music, because something that I know will probably be distracting.

Actually, that amazing little restaurant in Chianti was playing a classic rock radio station called "Il Nostalgia" or something. So we get to this place and we're looking at the farmland and the rolling hills, and all of a sudden you hear "Sweet Home Alabama" blasting. It was crazy. Then they played that Madonna song "Frozen," from "Ray of Light."

Holy shit.
Yeah, and the commercials were super loud. [Does fast, Italianized gibberish]

Any last words?
I can't really think of anything. Let me get out of the car and ask the guys.

[Anybody have any thoughts about food that they would like to tell the world?]

Nobody knows what I'm talking about.

Hooray For Earth - No Love by goldestegg