Top Chef Just Desserts, Season 2, Episode 5: Mess on a Stick/Win on a Stick

Share All sharing options for: Top Chef Just Desserts, Season 2, Episode 5: Mess on a Stick/Win on a Stick 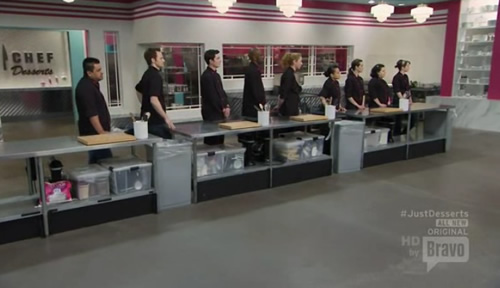 Episode five, here we go! The introduction is quick and unremarkable. Rebecca's preferred morning pick-me-up is Dr. Pepper, and thankfully the producers try to ease this from becoming a source of public shame by obscuring the can. Katzie's pretty happy with herself, and is rocking some Sylvia Weinstock glasses: 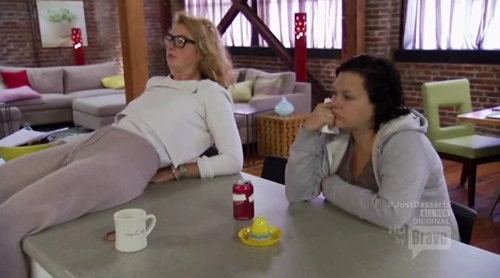 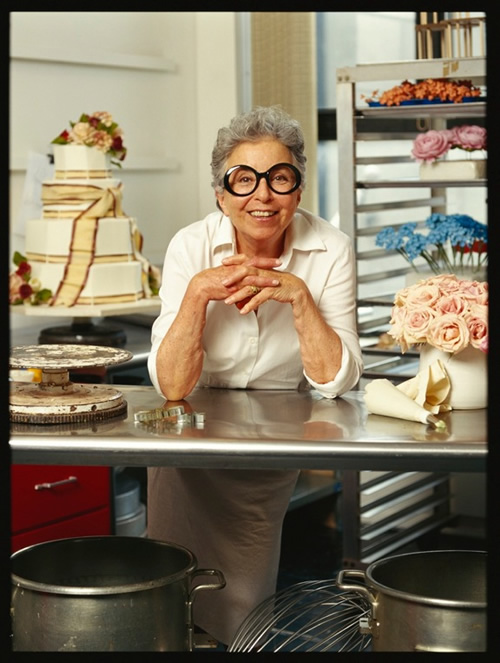 We're not sure those glasses really belong on anyone under seventy, but then again we're not Carson Kressley — thank god. While Katzie continues to flail about on a counter a la Mo Rocca, 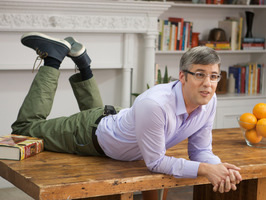 Sally & Orlando still have lingering bitchiness over Katzie's win. "Really, her?" they spew at each other. "She's so young and inexperienced" can sound quite a bit like "I wish I had come up with that."

That's enough of an introduction- let's head over to Kitchen Stadium. The chefs arrive for the Quickfire, where guest judge Pichet OMG! awaits. They are scared of him, and they should be. The challenge is issued: come up with a candy bar. Rebecca's busted arm is slammed into by a cart; she turns pale and looks like she's going to puke. Her food hits the floor, and Orlando drops his bitch routine to help her recover. Damn it! Why can't Orlando remain completely hatable? Don't do this to us, Bravo!

Carlos and Katzie both reach for the old dessert warhorse, the banana. Bor-ing. Aside: Carlos, in his stoic, arms-crossed way, is starting to seem pretty hot- or maybe we've just been trapped in front of the TV for too long. 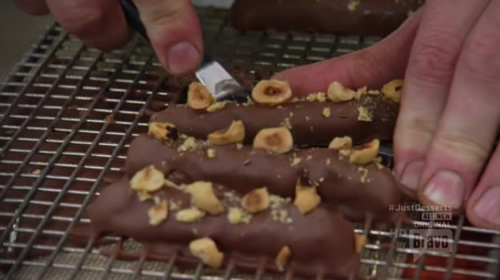 Matthew's creation is an obvious salute to South Park character Cornwallis Hanky but he fails to bill it that way.

Carlos turns out a tasty bar, and we discover (to our disappointment) that it really is just a banana in his pocket: 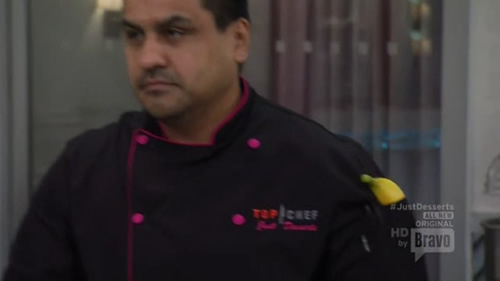 Pichet OMG! lets Katzie know that her bar is "a mess on a stick," which pisses her off because it's not on a stick. Then again, shit on a shingle isn't served on a shingle- but it's still shit, Katzie, and your dessert was still a mess. Katzie's thing and Matthew's Cornwallis land them at the bottom of the heap. 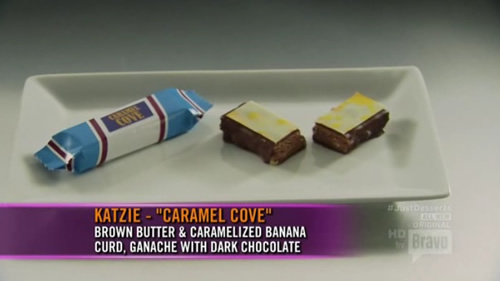 The two candy bars at the top belong to Sally and Rebecca's. Pichet OMG! says Sally's has "all the ingredients I look for in a candy bar," such as cocoa nibs and black forbidden rice. Rebecca makes a bar with panna cotta in it, which seems pretty darned clever. Sally wins, receives immunity, and .

The challenge is to feed a crowd of 150 at a water park, and the crew breaks into teams of three. Chris and Matthew are with Orlando, who proudly states, "We finally get to show these people what creativity is like." Yay, evil has returned!

It's time for some character development. We discover that Orlando's grandfather may or may not have tried to drown him as a child.

Sixteen minutes into the episode we learn that Amanda has never been to a water park, and also find that her mother was an immigrant from communist Russia. Bam! She falls for the immigrant curse that got Vanarin booted in a previous episode. Add it up, and you'll know that Amanda will be going home at the end of the episode. 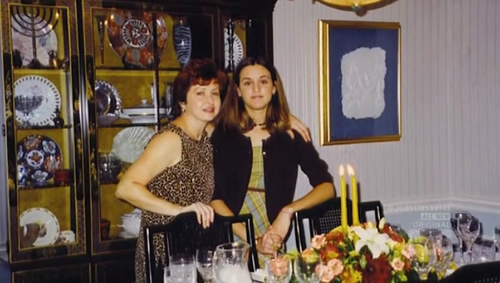 Carlos, Amanda, and Sally are teamed up, but Sally decides to not make her own dessert . Her rationale is that she doesn't want someone else going home on her team for the decisions she makes. Confident, much? Another thing that rationale won't get you is a win. Later on in the stew room she says she "sacrificed" herself by doing that. Rebecca (rightly) points out that, um, sorry sistah, but no — you did no such thing. Sacrificing yourself would've been going out on a limb without immunity. You decided to tread water.

There's a major traffic jam at the two ice cream batch freezers. Chris opts out of using those machines for his ice cream, and pre-loads a bunch of Pacojet cylinders. We'll see how that goes — Pacojets are pretty awesome, but if you're looking for traditional ice cream texture, you can be in for some trouble. Ice cream machines make ice cream; Pacojets make something else. Katzie finally gets her mix loaded, but forgets to close the machine's gate. An outtake from Texas Chainsaw massacre ensues: 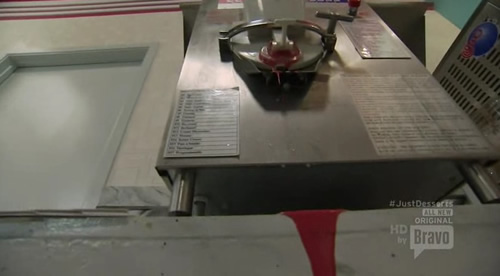 Off to the water park, where the chefs assemble. Amanda practices frying her funnel cakes and timing their service, which ensures that she will be going home.

Matthew makes a "play on strawberry shortcake" complete with warm strawberries and gummy ice cream (we called it!). Chris serves a syrupy drink, and Johnny notes a stickiness at the back of his throat after he swallows it (AHEM!!). Orlando's "play on a root beer float" has almost nothing to do with a root beer float — it appears to be a brownie, a scoop of ice cream, and root beer-flavored whip cream- and the judges leave their station underwhelmed. 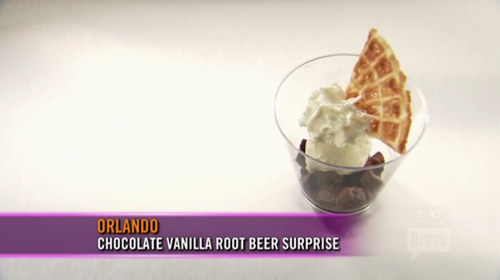 Girl Squad really gets it right — not only with their desserts, but the entire atmosphere they create with misters and lemonade.

Their desserts are uniformly well-conceived for outdoor presentation. Rebecca has a lemon snickerdoodle ice cream sandwich which looks quite lovely. Katzie embraces the stick and jams a swell-looking spumoni meets Baked Alaska blob onto it. It's so good that Judge #4 (aka Dannielle) does a "wiggle and coo" over it! Sassy!

Megan makes a strawberry soda float; it's dinged a bit by the judges, but we love that it was presented in little Barbie-sized glasses. This may be the closest we get to a scandalous video of Gail Simmons taking a hit from a bong: 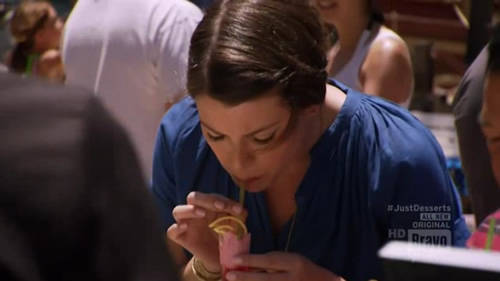 Megan, Katzie, and Rebecca come out on top — no surprise there — and Katzie takes the win with her be-sticked spumoni. 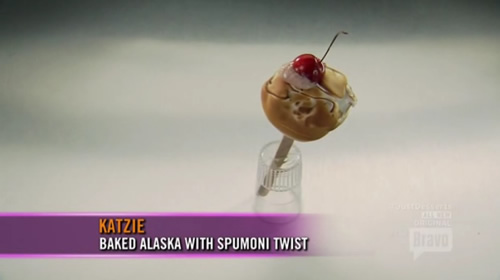 That's two elimination wins in a row for the spunky youngster. We wish we could have watched the cringing in the stew room personally when the others found out. 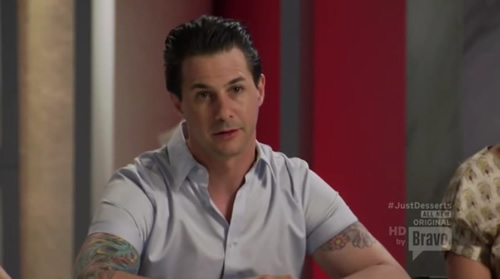 Johnny reads Sally down for playing it safe, and it's a bit of a turn-on to see him get all serious. Gail cuts Carlos' pop down to size by calling it "the dessert equivalent of a log of foie gras." D'oh! Amanda defends her funnel cake, but the judges pan her, and it, and everything. Orlando, Chris, and Matthew get sliced and diced as well. THUD. Those that fancy themselves the best — Chris, Orlando — are currently the ones that are floating through the competition in the middle of the pack. 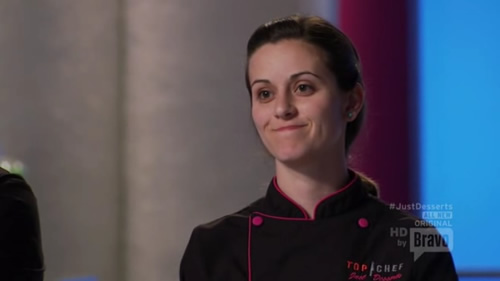 Amanda is dismissed. Amanda, remember: funnels are best left to mechanics and college binge drinking, and if you do another reality competition, include in your contract that no autobiographical details may be revealed within the the first 20 minutes of an episode!