Hotel Hell: Gordon Ramsay Gets a Fourth Show on Fox

Share All sharing options for: Hotel Hell: Gordon Ramsay Gets a Fourth Show on Fox 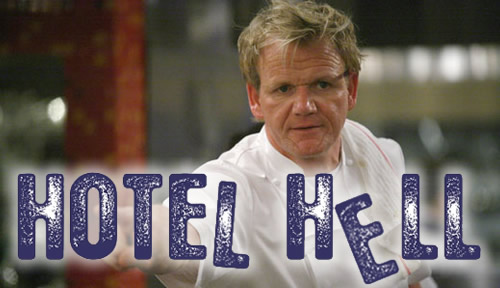 The wrinkly, shouty Kmart peddler Gordon Ramsay got himself another show on the Fox network. Which is what we all needed. It will be called Hotel Hell (working title). According to EW.com, Ramsay will "partner with a team of hospitality experts, traveling across the country to try and fix every aspect of struggling hotels, motels and bed & breakfasts."

But wait: Does Ramsay have any experience running hotels since he does not actually own or run any? AU CONTRAIRE MON FRERE. For you see, EW.com will stick to the script and tell you that "Ramsay has hotel experience, having studied hotel management as a young man, and having worked and owned hotel-based restaurants throughout his career." Just because you went to film school and go to the movies a lot, that does not make you a director.

Anyway, Hotel Hell smells a lot like the wildly popular UK series The Hotel Inspector that dates back to 2005. There will likely be an excessive use of black lights exposing bodily fluid stains. Also: Bad Coffee.

In addition to the upcoming Hotel Hell, Gordon Ramsay also leads the televised charades that are the Fox series MasterChef, Hell's Kitchen, and Kitchen Nightmares.

If Ramsay's poor track record of "saving" restaurants on Kitchen Nightmares is any indication, struggling bed-and-breakfast owners probably shouldn't get involved. But if you really want, hey look, the show is now casting.