Moonshine: The 'Hipsterization of Whiskey'

Share All sharing options for: Moonshine: The 'Hipsterization of Whiskey' 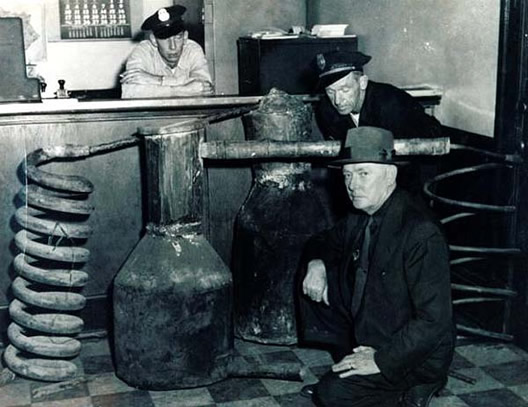 Moonshine evokes images of romance and illicit mischief. Bootleggers in double-breasted suits and sleek cars, hidden back rooms lined with bubbling potstills, and unmarked cedar shipping boxes. Bearded, backwoods Appalachians (hot). Frankly, what could be better than a good whirl of mischievous, illicit romance? I'll come back to that question in a bit. First, a few words on moonshine.

The past couple of years have seen an impressive jump in the white whiskey category, not to be conflated with the moonshine category. It's no wonder these two are used interchangeably when every other white whiskey label on the shelf alludes to moonshine's influence—for example Catdaddy with its three X's marking the medicinal brown bottle top, or the flagrantly christened Original Moonshine. To be clear, if the liquid has a label and is on a liquor store shelf, it is certainly not bootleg.

In his book, Moonshine!, Matthew B. Rowley calls the term an "American idiom" referring to "illicitly distilled liquor—illicit because the distilleries are unregistered, and the liquor untaxed." However, he distinguishes it from the general category of whiskey, noting that illegally-produced gin, vodka, brandies or any beverage of alcoholic nature technically falls under the "intellectual construct" of moonshine. It just so happens, historically, moonshine was most often un-aged whiskey, also called white dog.

For a discerning audience, it's important to realize the original function of moonshine in the United States: to get good and drunk. Perhaps that's generalizing a bit, but what are homemade spirits for if not to have one's own stash? With the return of craft distilling, American whiskey's growing popularity, and the old-is-new-again speakeasy-style bars, it's no wonder the idea of moonshine and white dog have become equated with the illicit romance of back-room debauchery and Boardwalk Empire brooding.

"It's the hipsterization of whiskey!" exclaimed cocktail historian David Wondrich when I asked him what he thought of the white whiskey phenomenon. "It's crazy that anyone would pay more money for an unaged spirit than for something that has seen the inside of a barrel." Mr. Wondrich has an excellent point. White whiskey is essentially the distilled grain spirit before it sees any of the smoothing and refining effects of wood. Why would anyone pay more for booze minus the maturation? Last week, when scanning the whiskey shelves at one well-known spirits store in New York City, I observed the shocking price tag on several white whiskeys, some creeping toward $40 for a 750 ml bottle and one at $37 for a 375 ml! This is difficult to comprehend considering highly rated small-batch American whiskeys stared back with steadily lower stickers.

The question we must ask of white whiskey is whether it can stand up as a lasting and legitimate category. Maker's Mark, an established player in the American whiskey game, recently began producing a white dog to be sold only at the distillery. President of Maker's Rob Samuels remarked that the difference between trend and tradition might depend upon whether "there is a genuine interest and opportunity beyond the professional bartender." As far as bartenders, most I've questioned have shown only a passing interest — they've tasted a few, but wouldn't recommend it neat, played with it in a cocktail, and chalked it up to fad factor.

As Greg Boehm, owner of Mudpuddle Books and Cocktail Kingdom, summed up over dinner one evening, "I think moonshine and white whiskey are an interesting part of one's education in spirits and a less interesting part of the ongoing drinking culture."

To answer the initial question of dallying in a (make-believe) love affair, I rounded up several highly respected palates to taste through a lineup of moonshines. Each reluctantly accepted with preemptive shivers, but obliged with silver tongues. Exotic and new, but ultimately messy and disappointing — it seems the love affair is never quite worth it.

Catdaddy Carolina Moonshine ($19, 80 proof): From North Carolina, this evocative bottle provoked comments such as, "This is not whiskey. It's eggnog." We smelled spumoni and tasted pistachio-flavored nail polish.

Death's Door White Whiskey ($38, 80 proof): Made mostly of wheat and a bit of Wisconsin barley, this spirit has seen a finish in uncharred barrels. It was a bit salty on the nose with a vinegary, banana pepper twang, which developed into a sugary thinness on the mouth.

Headlong White Dog Whiskey ($30, 80 proof): A Washingtonian from Woodinville Whiskey Co., this one is made in the style of a bourbon mash with corn, wheat and barley, and was a favorite of the tasting panel. Floral and pleasantly fruity at first, the complexity of the grain mixture came through with a rich cereal quality not unlike that of an unaged Scotch.

High West Silver Whiskey ($37, 80 proof): This attractive bottle from Utah combines western oat and barley malt, which translates to a ripe banana nose with hints of vanilla and raisin. Smokier and tighter than expected, High West was liked more than most whiskeys we tasted.

Hudson Valley New York Corn Whiskey ($29 for 350 ml, 80 proof): Traditionally fans of Tuthilltown spirits, we wanted this one to be good. At first whiff someone threw out, "Swamp ass!" and "Fritos and feet." With an awkward wax seal, the bottle was nearly impossible to open, and the corn translated as a weird over-cheesed nacho sweetness. In addition, it's insanely expensive.

The Original Moonshine ($40, 80 proof): If any whiskey in the lineup was going for the true taste moonshine this one nailed it. With a paint lacquer nose and shoe polish taste, this one was all fusel oil and tails like it hadn't been cut soon enough. Worrisome.

Wry Moon ($34, 92 proof): From Corsair out of Kentucky, Wry Moon was well-liked by all tasters. Though a bit hot, it had an appropriate malty, cereal sweetness like we'd expect a good whiskey should.

*Thank you to my tasters. I owe you many un-white whiskey drinks.

Leslie Pariseau is a writer in New York City. She prefers Muppets, mezcal and the idea of moonshine.