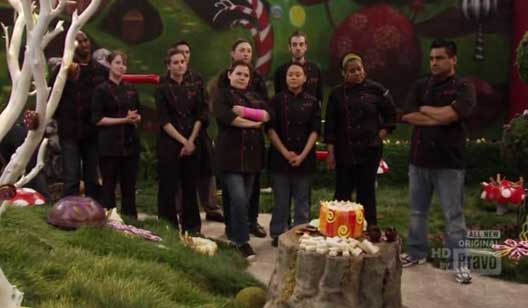 Let’s get this out right off the bat: this was a good episode! It may have taken until episode four, but we finally have an episode that delivered. This season, the new opening recaps threw us for a loop, but last night the voice-overs won us over on the concept when Gail said that last week's dismissal, Nelson, "went sailing on the good ship lollipop." Zing! You got us back!

The sixgradertestants take a field trip to the movies. Matthew (we still have to look up his name online every time we write about him) thought they were walking into a Quickfire challenge and stocked up on all the concessions just in case. But ultimately, it wasn’t necessary because they settled down to watch the original version of Willy Wonka and the Chocolate Factory. At some point during the movie the challenge is revealed. Silly, Amanda, did you reeeaaallllyyy think it would just be a day off?

Planted in the audience are the original kids from the movie, now all grown up. Our contestants didn’t know it was them, but we knew – first, because we have actually met them all before, and second, because Bravo told us ad naseum all week long.

Naturally, Julie Dawn Cole, who portrayed Veruca Salt, is planted in the audience next to Orlando. Bitches unite! 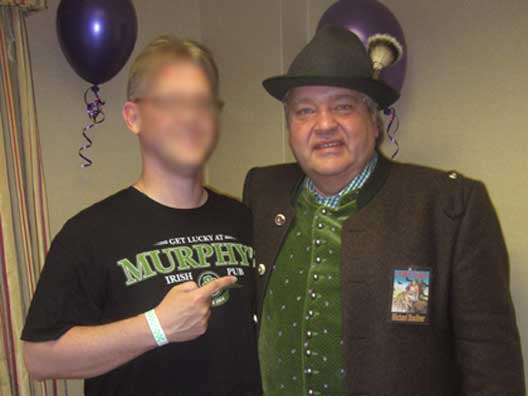 Everyone is actually getting teary-eyed and gobsmacked about meeting the kids, which must really fall into the “you had to be there” category. But the real excitement comes from the Elimination Challenge. No Quickfire this week: the whole group must transform the TCJD dining room into a Willy Wonka-esque edible wonderland – just like in the original film. The entire team is charged with the mission; no one chef has to do any one thing in particular. It's about the whole gang getting it done right.

Brainstorming ensues, with minimal bullying. Alas! It seems like things might all fall into place. We were a bit disappointed that the challenge had to be taken so literally, but with everything done by committee, it probably couldn't be approached otherwise.

We have to admit this is a genius idea, and must have been truly exciting for the group. We felt like kids in a candy store (wha-whawwwwww) and hoped for some spectacular results. Thankfully we weren’t subjected to a movie tie-in to something else, like The Human Centipede or The Help.

The team divides up, with several members going "creative" and the others are "production," and that's when agendas appear. The creative team needs to prepare the set to receive the production team's desserts, but they spend the vast majority of their time constructing Chris’s chocolate waterfall.

By fancying himself the mastermind of the project, Chris commandeers the creative team into building his chocolate fountain leaving everyone else to rush through getting their desserts out on their own. Why did everyone buy into helping him and his fountain at the detriment of their own stuff? It was like watching Klaus Kinski, as Fitzcarraldo, round up the locals to build an opera house in the middle of the Amazon (their own livelihoods be damned). Apparently one should never underestimate the power of just saying “do this”; apparently people listen. 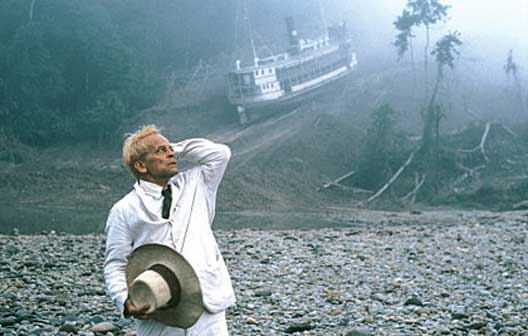 Megan especially falls into the trap, which Katzie, Melissa and Rebecca all notice. The only one who doesn’t seems to be noticing is Megan, who ends up later on the chopping block because of her lackluster last minute desserts.

Katzie immediately sees how this is going to play out and sticks to her guns to create an edible garden - one of the few original ideas they come up with outside of recreating the movie set. She creates carrot-shaped carrot cakes, buried in "dirt" as well as an interactive beehive with dripping honey. 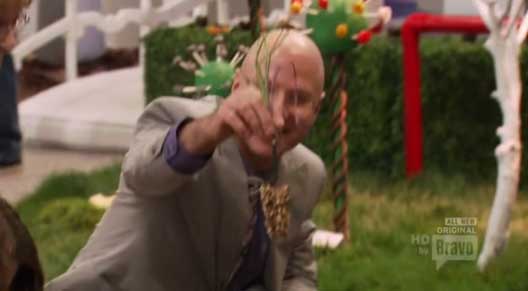 But we're getting ahead out ourselves.

Wait, what's this? We finally see Johnny make proper kitchen rounds! Thank you, editors! This had been sorely lacking in previous episodes and after seeing him interact with everyone in the kitchen we realize how much the lack of Johnny and Gail screen time has been hurting the show this season. Maybe now that the cast is getting trimmed we'll be seeing more of Coach Iuzzini. This presence – like Tom's in the regular TC – helps guide people to produce the desserts we came to the show to see in the first place. Johnny reminds everyone they have complete freedom in what they do; they are only limited by their imagination and skill. Wait a minute! Have the producers won? Are we beginning to care about these people (that we still have a hard time naming)?? Phew, thank goodness there is Johnny’s completely fake banter with Melissa, who amps up the “Jamaica-Mahn!” accent when she gets excited. How many takes did that exchange require? Painful.

His inserted solo interviews are good, but they look strangely green screened. It's probably hard to tell from a screen capture but it reminds us of watching The Daily Show's "on-the-scene" reporting. 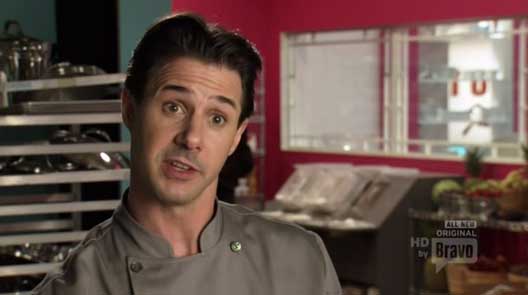 Orlando seems to get along better with a few hundred pounds of chocolate than any of his fellow contestants, so they leave him alone to stir the entire day. We doubt anyone complained about that.

But before Johnny leaves, there’s just one. more. thing. Double-elimination! That’s right, two of you are going home.

As soon as the oompatestants begin working again, one person is clearly in trouble. Craig's early attempts at a monster-sized Gummi Bear don't fare well at all. Oh dear. Craig manages to get this out of his mold: 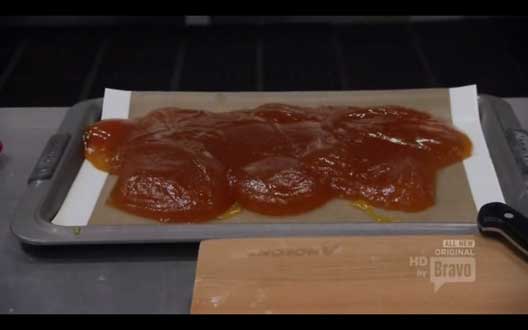 Which, for no particular reason, reminds me of Belial from the movie Basket Case. 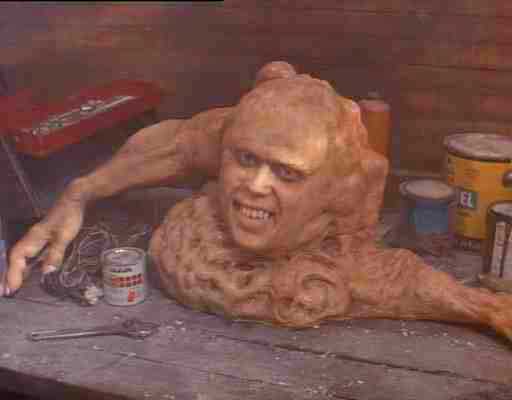 Sally gets sucked into Craig's void; she spends too much of her time helping her former student avoid complete shame. What is it, exactly, that Sally is making? It's a little hard to tell, but when Rebecca says "it looks like poop," she's hitting a little too close to the truth. 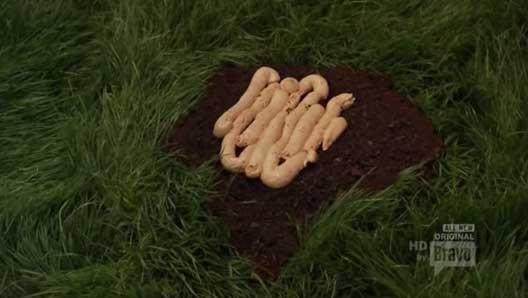 It doesn't help when Sally responds by joking that it is "Oompa Loompa droppings." Unfortunately for her, our minds (and most likely those of the judges) jump to the exit of Central Park along 59th street where all the hansom cab horses congregate. Oh dear. 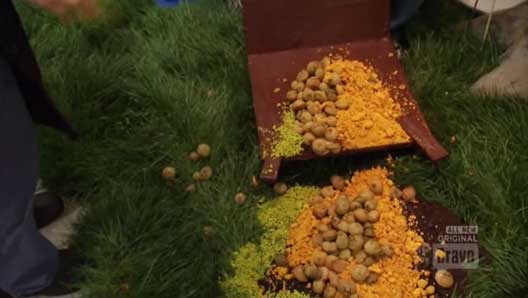 As the clock runs down, it’s crystal clear that it’s every man for himself, as Katzie accurately informs us. The creative team hasn’t lived up to their end of the bargain of helping the production team and now we get a wild frenzy of flung desserts and accusations.

Chris: “I'm concerned the creative team doesn’t have time to finish my chocolate waterfall." Um, ego much? We see a lot of things in that brown monstrosity, but a fountain isn't one of them: Treebeard, maybe. Leto II halfway through his worm transformation, most likely 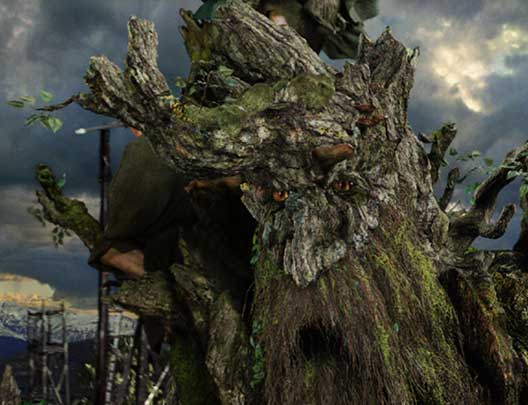 Chris seems to be mixing up his fantasy stories. But by the end he still doesn’t see it and is convinced everyone will be blown away and he'll be on the top.

The end result is actually pretty spectacular. Congrats to everyone for what they were able to pull off! 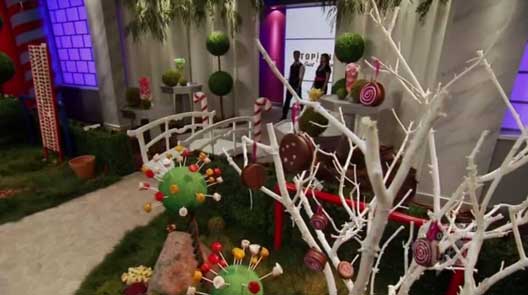 For Judges’ Table, Gail pulls a Project Runway and invites in the top and bottom performers. Apparently one of them will be the winner and two of them will be out. Carlos (PB&J macaroons and edible wallpaper), Matthew (bonbons and profiteroles) and Katzie end up on top – with ultimately Katzie pulling out the win. Congrats to her for being the only one to do something original and telling Chris to shove it.

On the chopping block are Megan (for one tasteless dessert and another with alcohol), Melissa (gnarly looking green donuts on PVC pipes), Sally (horse manure) and Craig (The Blob).

When they return to stew while the judges deliberate, Chris is on the edge of his seat waiting to be called in and announced the winner. It’s a hilarious moment when he goes all “wha-wha-whaaatttttt????” when he’s informed his chocolate milk and fountain only landed him in the middle of the pack. Chris, sometimes dictators fall. Or haven’t you been paying attention to the news this year?

In the end, Craig finally gets the boot. Melissa goes home too. They may have gotten on our nerves, but at least they had the grace and good humor to skip away in style.

Side note about judging criteria: Maybe we weren’t completely informed of the rules of the challenge, but we are both flabbergasted by the fact that ultimately it wasn’t what you did for the team that decided your fate but what single dessert each person presented. The group was told to work as a team but then people like Sally and Megan were lambasted for doing just that. We hope it was their total contributions that saved them from elimination, but don’t ride them for doing what the challenge required.