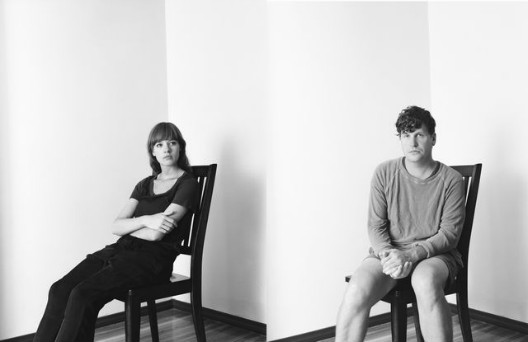 Mary Pearson and Rob Barber, together known as the band High Places, are vegans. And they have been that way for quite some time. In anticipation of their forthcoming album "Original Colors" (to be released October 11 on Thrill Jockey), I got a chance to talk to both members of the band — the vocalist Pearson and the multi-instrumentalist Barber, architect of their layered, fractured, altogether elegant sound — about how they became vegans, the challenges of maintaining the lifestyle on tour, and how they still keep their diets eclectic.

You guys are vegan. When and why did you decide to go that route?
R: I actually was vegetarian for a couple of years before I went vegan. I was around 14, in 1988, and then in 1990 I went vegan. When I was a little kid I never understood why we didn't eat the fish in the fish tank — why would eat certain animals and not others. And basically, when I was a teenager everything was black and white and I was a punk rock kid. So after I got out of that phase, I weighed the pros and cons. I kind of realized that I didn't eat it, that I didn't crave it, and so for the last 20 or so years I've been that way.

How hard is it to maintain it on the road?
M: There are a lot of luxuries of being a two-person band, and one of them is that we can tour in a more mellow way. When it's just the two of us, we can get a full night's sleep, have a chill drive, and be contentious about getting groceries and having options in the van so we aren't on some interstate in the middle of the country starving. We'll go to a grocery store in the morning and get breakfast and like a salad for lunch. It's not so hard to find vegetarian restaurants now in the states, and there are places that can easily adapt their menus for us.

R: Yeah, being two people, it's different from being a four-person band with a tour manager where you're arguing over where to go. What I like about it, personally, is that it makes you more conscious about how you are eating on tour. I think you can be a vegan and eat just potato chips on the road, or you can be an omnivore and eat IHOP constantly. Both of those things mess you up and be really miserable. It just requires a little more planning ahead.

Have there been any of those "Oh, shit!" moments where you don't have anything to eat?
M: Yeah, it happens to me every time we are in Europe on tour. There is always one day that's a nightmare. My blood sugar level can easily set off, I'm sensitive, and I remember a day in Paris when I was just so hungry and miserable.

R: Most of it isn't due to a lack of options as much as it is about scheduling. We toured with Deerhunter, and those guys are full-on omnivores, so I remember waking up extra early to go grab a baguette, some spinach, and a couple of other things to make sure I was covered. It's the days where you don't really have time to do any of that that are tough.

M: Yeah, in the States it's really easy. Rob and I talk about it a lot — the new world versus the old world countries. How in the new world countries there is such an international mentality where people are really accepting of different cuisines, and then in the old world people are like, "Well, we've done it this way for generations, so why are you trying to rock the boat?" Sweeping generalization, but...

What are some of those "old world" countries?
M: I think Portugal is very, very proud of their cuisine, and I'm sure that there are a lot of dishes that are amazing that we've never tried because they're made up of five layers of meat and cheese and beer sauce. But people will be like, "Why aren't you trying that?!" I've always been an adventurous eater, so that always comes with a little sadness. It's also kind of cool, though, to show people that we can eat their great produce and really appreciate it.

R: It's funny. Even in countries that might not seem super vegan friendly, like Eastern Europe for example, there are easy ways around it. My background is Polish so I know all the accidentally vegan things in Poland and places like that. There's no problem.

What are some of those dishes?
R: It's not the most overly nutritious stuff, but it's delicious. Pierogis, some borscht. On the vegetable level, the best you'll get is like cabbage, but you'll get by. As long as there's a market.

You're both based in L.A. What do you like to eat there?
R: I really, really like Vietnamese food, and there are a bunch of places in San Gabriel Valley, just east of Los Angeles proper that have a lot of options. There's a word for vegetarian in Thai, "Chay," so we've learned that and other words from other cultures to be able to navigate menus.

M: There's a little bakery in Echo Park called KG bakery, right below a law office. I went down there one time to see if they made vegetarian sandwiches, and they didn't. But we went back, and it's our favorite banh mi. It's like $3.95 for a baguette with tofu, pickled daikon, carrots, cilantro, and vermicelli.

M: Yeah, Juliana's in Santa Monica, I really like.

What do you get there?
M: I usually get kelp noodle, which is awesome. Salad. They also have a really great drink called Alien Blood.

R: They have a nori roll that's really good. It's got dehydrated coconut. That giant roll is a gutbuster — a lot of raw food is really filling.

Oh wow. Do you tend to go to specifically vegan or vegetarian places, or do you just go to restaurants that will have options for you?
R: I think we both agree on this. We tend to think of a kind of food we want to eat, and if there's a vegetarian version of it, we tend to avoid it. If there's a Mexican restaurant that's vegetarian, I'd rather just go to a legit Mexican place and find something that works.

Any last words?
M: We have a Flickr page that has turned into a food blog.

Is it just pictures or is there text?
M: It's just photos we take of what we eat, since we always have cameras with us. But also little descriptions of where we are, what we've eaten, and what we are making at home. We update it regularly.

Single: 'Year Off"
High Places - Year Off by thrilljockey