To thoroughly enjoy the glory that is Top Chef Just Desserts, we welcome Bryan Petroff and Doug Quint of NYC's Big Gay Ice Cream who will be here every week to take us through the season. SPECIAL NOTE: Their new NYC store officially opens this Saturday, September 3, at noon. 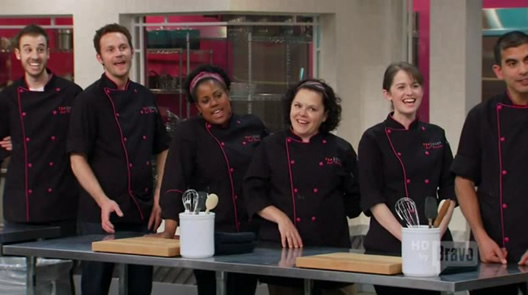 Here's something new: the episode began with a voice-over recap of the previous show. Don't we usually just see a few clips to let us know who lost and who won? It's fine, we're not complaining, but it breaks Top Chef format and it was therefore a touch jarring. I'm hoping that the top of episode three recaps both previous episodes, and things eventually get so confusing that we have no idea what our own names are. 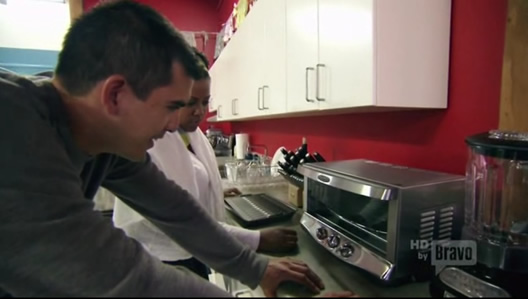 The episode proper begins at their loft; lo and behold: Nelson at the toaster oven! Did someone actually pay attention to Chloe Sevigny? We discover that fracturetestant Rebecca has busted up her hand. "I hurt my wrist last night at the loft" is the only explanation we get, which is terribly intriguing. Did she take an Ambien and try to crawl into bed with Orlando? WE MAY NEVER KNOW. 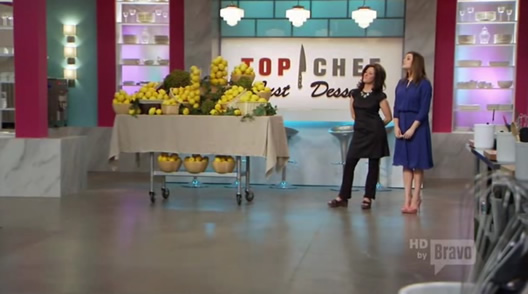 We're off to the Quickfire, where Margaret Braun, sugartist, is our guest judge and the challenge is to create an original dessert with lemons. Chemtestant Amanda informs us that lemons are acidic. Phew, I'm glad that was explained, because didn't we all sleep through (or hallucinate on LSD during) high school chemistry class? 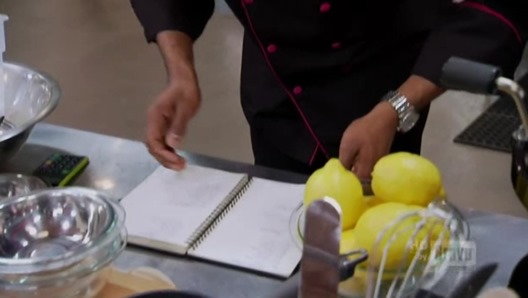 We were surprised to see that each cliffsnotestestant has a notebook at hand, and they are seen flipping for particular recipes. We're trying to decide if we saw those last year — no, right? Wasn't there much discussion last season about "how much we miss our recipes?" Coffee Tawk question: How many recipes are they allowed to bring along with them through the season and is that fair? Discuss. I think having recipes on hand may have been one reason this episode ended up so lousy — more on that later. For now, let's enjoy some product placement. 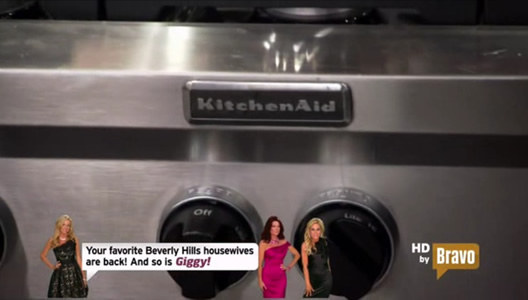 Carlos creates something that includes "reverse sphered yogurt." What the hell? I suppose we could look up what "reverse sphered (anything)" is, but it's time to be a conscientious curmudgeon and just refuse to believe that such a thing exists. We're going to start serving "Chilled Reverse Biellmann Cream ensconced in Double Lutz Triple Toe Loop Cocoa Emulsion." That's a vanilla cone with chocolate dip, but maybe we'll discover the joy some chefs get from baffling eaters. 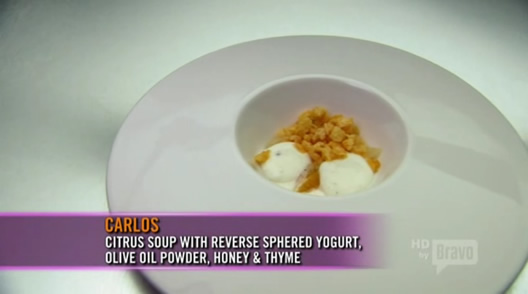 Bitchtestant Orlando admits to being allergic to lemons and once "ate so many lemon tarts" that he got hives all around his face. Orlando, you are either retelling a story from your sixth grade cafeteria days or you do stupid shit. Either way, he has no intention of letting this hinder him. Good for you! Screw allergies! To prove his fortitude he offers up lemon three ways on top of a chocolate skid mark. 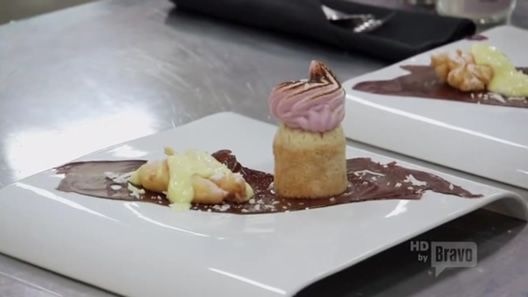 Orlando ends up at the bottom of the Quickfire and didn't seem to understand what Margaret was getting at when she said she "personally didn't like it." Instead he goes off into the confessional booth to say that Margaret needs to leave her "personal shit" at home and judge professionally. Here's what we heard Margaret say: "Orlando, look, I know you are a bitch in the kitchen, really I do, but, honey, that shit sucked ass. Lemon and chocolate? Really? Lame. I don't want to ride you too hard about your dessert in front of the others, so I'm gonna temper what I say by using the word 'personally'."

We were intrigued by Batalitestant Katzie, who offered up lemon crepes cut up into ribbons a la pasta. A fun and fairly original approach? Yay! 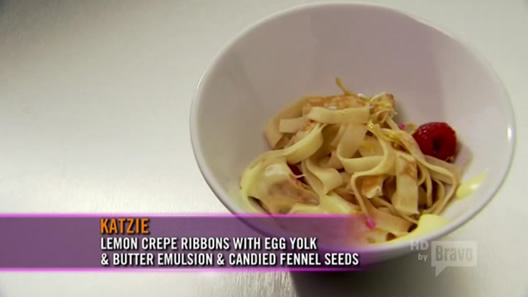 Vanarin didn't pay much attention to Johnny's thoughts from the last episode, when he was chastised for using sage and pineapple to evoke the Black Forest. Although Orlando gave him a run for his money, he again wins the "too much shit on a plate" award with his lemon-curd-semifreddo-with-coconut-brown-butter-streusel-and-blackberry-orange-thyme-compote and brulleed (Cream? Mashmallow?) topping. 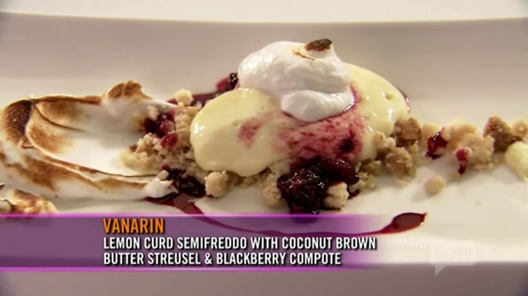 Someone named Matthew won the Quickfire. We haven't mentioned him because until this win we hadn't noticed him. Wait a minute, who just won the Quickfire? Yup, forgot already. CUE COMMERCIAL! 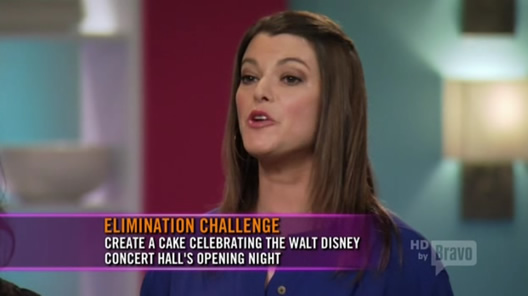 Four teams are created; each team must create a cake for the Los Angeles Philharmonic, with a single convectiontestant responsible for their own tier. The challenge is pretty basic, and there's plenty of obvious design inspiration. You've got the Disney Concert Hall, by Frank Gehry and the hall's famous pipe organ. And if those don't inspire, there's always music director Gustavo Dudamel's hair. Easy peasy. Get to work, battertestants!

Carlos is this episode's freakout.The more he tries to express his vision, the more he can't come up with the names of things (scaffolding, spokes, etc.), and the more Rebecca and Sally just stare at him. Which must be why they end up doing almost the exact same devil's food cake. Johnny's first question to the chefs is "when you chose your flavors, did you say "Okay, does this all work? Do these flavors make sense [together]?" Nope, not so much. 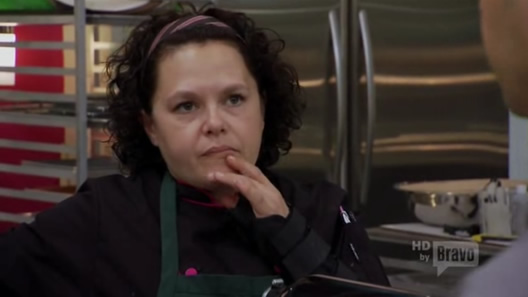 Rebecca lets us know that there is a "HUGE" difference between a buttermilk-and-oil Devil's Food cake and a milk-and-oil Devil's Food cake. Rebecca dear, really? Are you honestly going to try that argument with Johnny? This embodies why we thinking that the notebooks aren't a great idea. Yes, we understand that pastry chefs needs ratios and codification. We get it. The problem is that the chefs run to their notes and find a recipe that fits into the challenge. These challenges are meant to be creative exercises beyond "find a recipe that will cover the bases." If the chefs didn't have notes, they would have discussed what each layer might consist of; instead they just made a favorite recipe from their journal, and the entire episode fizzled.

With most everyone seeking musical inspiration, Craig is the only one to do something inspired by Disney. His ode to Fantasia is made with something called Grandma's Cake, which is supposed to deliver "that sweet pow pow!" Sounds like a Black Eyed Peas lyric, don't you think? Silly Craig, the recipe didn't come from your Grandma. It came from Sally, your former teacher and current co-caketestant. Sally later calls him out for it. Go Sally! Around this time Amanda has the gall to ask Varanin, "Are you from Cambodia, Cambodia?" This is either completely dumb or I'm not aware of that sprawling metropolis, Cambodia City. Regardless, it gives us our tear-jerking interlude about immigrant parents trying to live the American dream. This tells us one thing: he's going home! 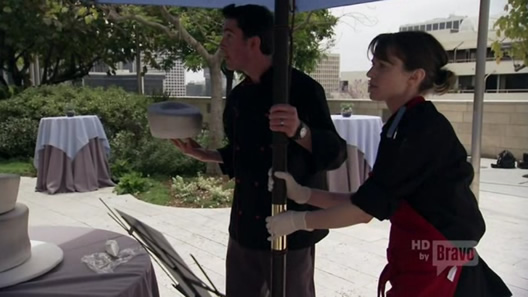 The chefs assemble outside Disney Hall, and as this is a summer day in Los Angeles the cakes begin slipping, sliding, sinking and shifting. Every team is hit hard. Naturally Vanarin's layer is completely covered with junk like little trumpets and harps; what might be a Polynesian Bass Ukelele is the topper. These decorations are tragic; a lobotomized and anesthetized Duff Goldman would make better stuff with his toes. His crew vainly tries to spray-freeze stuff back into place, but you can't fix ugly.

The look on Gail and Johnny's faces here sums it all up. 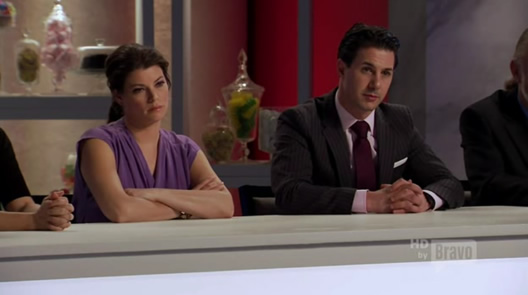 Once the setting changed to Disney Hall there was no connection to the building, to the Philharmonic, or to Frank Gehry: there were no shots inside the space, no music was played, and the few representatives of the LA Phil that schlepped out to eat cake appeared to be the corporate end of the orchestra rather than musicians. Why not just film on a set? At least there would have been air conditioning and the cakes wouldn't have slid into puddles.

Varanin got the boot for his over-baked cakeplosion and left the judges with a goodbye that seemed rather ominous: "it's an honor to be in your presence, and I promise this isn't the last time you'll hear from me." Is he going to appear again wielding a whisk or a semi-automatic weapon?

Favorite lines: "this cake is (as) heavy as a pile of poop" and the use of "decoring" instead of "decorating."

It may have been the Xanax we took to face another hour with Craig, the lack of conflict or freshness, or the fact that none of the cakes could possibly wow anyone, but man, this was a snoozer. If you missed the episode and your DVR didn't catch it, here is suggested alternate viewing: