The US Desert Episode of No Reservations: Just the One-Liners

Share All sharing options for: The US Desert Episode of No Reservations: Just the One-Liners

On last night's episode of No Reservations, cartoon character/host Anthony Bourdain went to the desert to drink tequila, drive cool cars and hang out with musicians (including Josh Homme from Queens of the Stone Age). There wasn't a whole lot of food, but a surprising amount of what food there was Bourdain cooked himself. Now, on to the Quotable Bourdain — feel free to add your picks in the comments below.

1) On the desert: "And once you're past Pal Springs into the high desert, people start to vibrate at a different pitch than they do elsewhere."
2) On the desert drink of choice: "Straight off, it's like a mason jar full of tequila. They tend to like tequila out here, it seems." 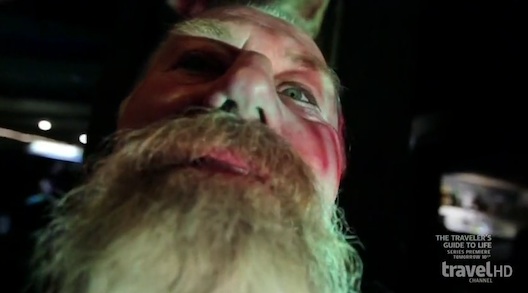 3) On the muscle at a roadhouse: "The head of security here? Fucking huge. He could take Swayze."
4) On changing plans: "After dinner, between the constant flow of tequila and Josh's manhandling of an unruly patron at the bar, our plans to hit the studio tonight evaporate."
5) On longevity in the desert: "In the dry heat, nothing rots. It's preserved in a slightly parched form forever, like George Hamilton, or Keith Richards." 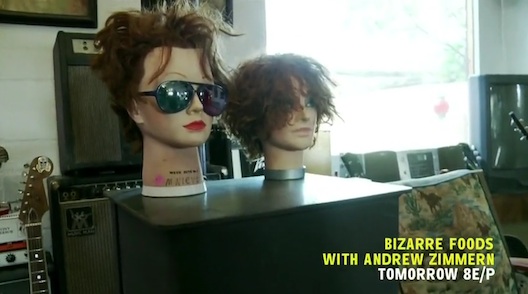 6) On some decorative heads they buy at a flea market: "There's something vaguely Manson-esque going on here. I didn't want to say that, but it's kind of a Spahn Ranch thing going on."
7) On why people watch Man vs Food: "It's the Sigfried and Roy principle. You're saying today's the day that fucking tiger is taking a bite out of a German." 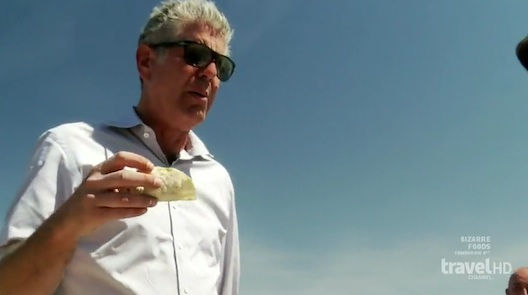 8) On the real Mexican food: "The menu is real Mexican as opposed to fake-ass Mexican. That means tripe, pork butt, ribs, all simmered together in a copper kettle."
9) On how to eat your prime rib: "Don't skimp on the horseradish, varlet, lest I smite you with my codpiece." 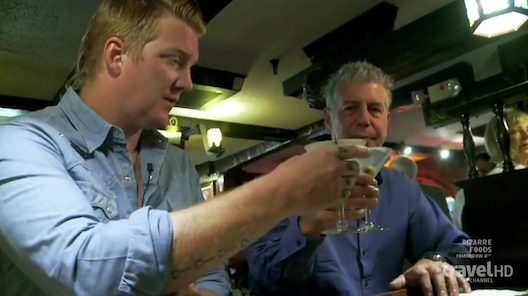 10) On the Rat Pack: "Frank Sinatra in his dreams wanted to be Dean Martin."
11) Bourdain on a line cook who cut into a prime rib roast too quickly: "It was like someone had just gouged an eye out of a beautiful woman."