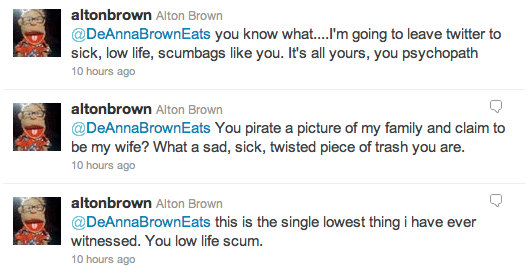 Food TV nerdling and molecular gastronomy hater Alton Brown has deleted his Twitter account because a troll created a fake user (@deannabrowneats, since deleted) that pretended to be his wife. His final tweet: "you know what....I'm going to leave twitter to sick, low life, scumbags like you. It's all yours, you psychopath."

He also tweeted, "You pirate a picture of my family and claim to be my wife? What a sad, sick, twisted piece of trash you are" and "this is the single lowest i have ever witnessed. You low life scum." Alton Brown hit up his blog today to explain: "I left Twitter because a parasitic troll fraudulently posing as my wife started tweeting. It even used a photo of my family as its avatar."

Alton Brown has had a tumultuous relationship with Twitter since joining in May: He'd regularly post a bunch of tweets only to delete them en masse, usually within twelve hours. There was even an incident last month when someone had the smarts to auto-retweet everything from @altonbrown (for archival purpose, purportedly) using another Twitter account, @GoodRetweets. But that didn't sit well with Alton Brown. He refused to continue tweeting until @GoodRetweets stopped (they acquiesced, and Alton Brown returned).

"The way I see it, Twitter is like a big cocktail party," Alton Brown wrote on his blog. "If I was at a cocktail party and someone puked on my wife’s shoes, odds are excellent that we’d leave. Does that mean I won’t attend any more cocktail parties? Maybe not. Maybe I’ll just have to figure out a way to host my own cocktail parties where people have to actually be accountable for their behavior." The super-creepy stalker-ish side of the internet was enough for him. Boom, gone.