Joe Karnes of Fitz and the Tantrums Loves His Wagamama

Share All sharing options for: Joe Karnes of Fitz and the Tantrums Loves His Wagamama 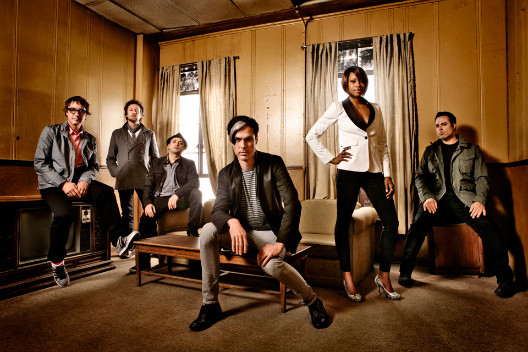 Fitz and the Tantrums are one of the more killing acts out there, and today we get to talk to Joe Karnes, the man who holds down their indie soul low end. In short, he's the guy who brings the funk and backbone to songs like "MoneyGrabber" (see and listen below). As the band gears up for a North American tour this fall, we got a chance to talk to Karnes about what he likes to eat at home in L.A., on tour abroad, and across the U.S. with his girlfriend.

You guys were just in Europe. How was the food?
Actually, it was probably one of the worst food experiences of all my European travels. We were traveling so much — constantly driving — so it was iffy festival food and so many sandwiches out of the gas station. It was insane. I'm actually pulling up my calendar right now to get a handle of all that we did, because i know we had a good meal at one point.

What was it?
Actually, Wagamama was pretty good. After driving four days and just eating gas station food, it was like a godsend.

In which city?
In London, in Shepherd's Bush.

Tell me more about it.
It's a solid place. I like to get ramen and soups, especially when I'm trying to clean house. It's always the same, and you can count on getting good quality Asian food every time. It's a no-brainer.

What did you eat?
I tried something that I really dug, except the broth wasn't that amazing. It was a pork dumpling soup. The dumplings were amazing. Normally, I get a spicy chicken ramen that has a broth with a really nice kick to it. I can't get enough of their little pickles. They also have a little vegetarian side dish, a yam, that is always a good call.

Now that I remember, at one of the festivals, at V Fest in Stafford, they had a corned beef hash with a fried egg and bacon on top. Pretty exciting and satisfying for a hospitality tent.

Was that before or after you played?
Oh, after. [laughs]

You are from Los Angeles, right? What do you like to eat there at home or at restaurants?
Born and raised, yeah. I'm just starting to learn to cook at home, so my cuisine is kind of limited. But there's a ton of restaurants out here that I go to frequently.

Any names come to mind?
Little Dom's, which is a great, great specialty Italian restaurant. They have handmade pastas, and it's not going to be the typical fare that you see at a trattoria-style Italian spot. They have little pizzas, amazing grilled artichokes, handmade sausage, and a pappardelle with peas and sausage in a light sauce that is my favorite thing to get there any time I go.

I also like Lalo a lot. It's not necessarily fusion, but it's not a traditional Mexican restaurant. They have some insane margaritas. On Mondays they have $2 taco night with traditional chicken, pork, and fish tacos — even potato tacos and a kind of hamburger taco that is just delicious.

How did you get into food?
Aside from enjoying food all of my life, I became a food enthusiast from watching all those cooking shows. It has made me more adventurous.

Which ones?
It started out mainly with Top Chef. Before that, Iron Chef. Then I got into MasterChef with Gordon Ramsay, which I really like. He shows people some neat tricks. It got me interested in trying things like braised pork belly. Actually, that reminds me of a place in Silverlake that makes a great pork belly: Gingergrass. That's one of my main go-to spots, a place where I try to eat everything.

Speaking of Gingergrass, my girlfriend and I took a trip to Vietnam and Laos last year, and those flavors blew our minds.

What did you eat?
Lots of pho. We actually love a place out here in L.A. called Viet Noodle Bar that does pho. We did a cooking class while we were in Vietnam, and we went to the market and had someone interpret for us while we were there. They showed us all of the meat — how they like to use every part of an animal — and how often they use the fresh, fresh ingredients like coriander and morning glory. Things like that.

How did you manage with the language?
We managed pretty good. When we went off into the hills and saw some tribes with a guide, it was just touristy enough where we could do fine. That was especially the case in the somewhat nicer restaurants. I was surprised, actually. We could go get a random Vietnamese coffee and get our point across just perfectly. And if we had any difficulty, someone invariably would help us. It was amazing. It opened up a culinary world for me.

Any favorite places in other cities?
In Austin I'll go to the Iron Horse for barbecue. They also have amazing Tex Mex. I'm kind of a staunch believer in only eating Mexican food from a border state. I think it's a cuisine that is poorly translated; imitations are not great in places that aren't border states.

In New York I like going to Veselka. Oh man, I had an amazing borscht there and dumplings. I like an amazing little Italian restaurant that my girlfriend introduced me to called Piccolo Angelo's, over in the West Village. They have these lobster canneloni that are to die for. All of the food is delicious, fresh, and homey.

For Chicago I do deep dish pizzas when I can afford the time, because you really have to sit there for an hour or more to eat those things. But it's such a satisfying experience.

Any last words?
If my story is any indication, people should try to be a little more adventurous. I've learned that if you order adventurous, you might be rewarded.

"Picking Up The Pieces" Live From Daryl Hall's House