The Louisiana Episode of No Reservations: Just the One-Liners

Share All sharing options for: The Louisiana Episode of No Reservations: Just the One-Liners

Last night's season finale of No Reservations took Anthony Bourdain to Louisiana, where he sampled some of the treats of New Orleans with actor Wendell Pierce from Treme, and then headed out to what appeared to be the middle of nowhere. Cajun Country seemed to agree with Bourdain, who shot a pig named "Antony Boudin" and ate all kinds of meaty treasures it produced. On to the Quotable Bourdain — feel free to add your picks in the comments.

1) On the origin of New Orleans street noodle dish, yakkamein: "Maybe broke-ass and too lazy to go out, some early innovator tried to recreate the dim memory of Chinese noodles with what he hard around."
2) On the other name for yakkamein, "Ol' Sober": "You need a little spice when you're sober." 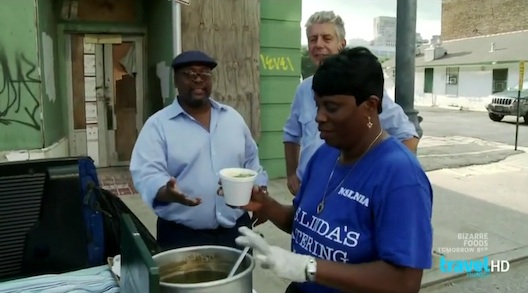 3) On the future of yakkamein: "I can predict without any doubt at all that sometime in the next decade there will be some expensive, of-the-moment restaurant in town selling a $19.95 bowl of deconstructed yakkamein." 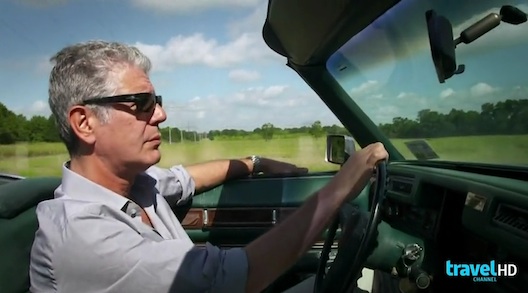 4) On Cajun cooking: "Smothering is where you break all the rules of classic French cooking by doing everything gloriously wrong."
5) On some of the meat brought to a cookout: "Mmm, road kill. There's a show there somewhere." 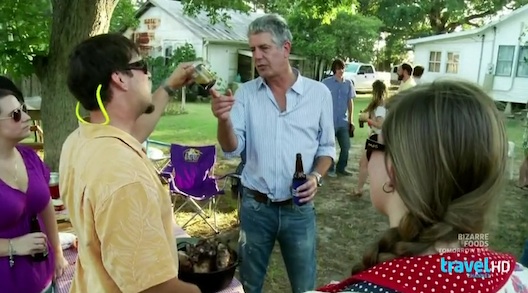 6) On how Cajun cooks roll: "You see what he's got? It's like a little crack jar of reduction."
7) On the food at the cookout: "A crawfish bisque that is the single best thing I've eaten since elBulli." 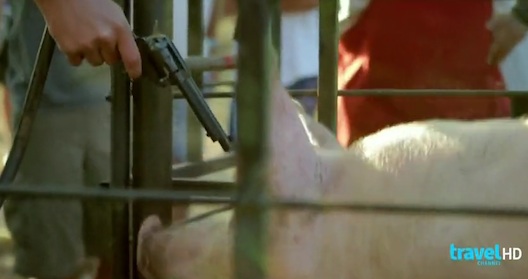 8) "I will deliver the good news to the pig, because I think it's appropriate ethically, given that I'm eating the pig, I will be complicit in its murder." 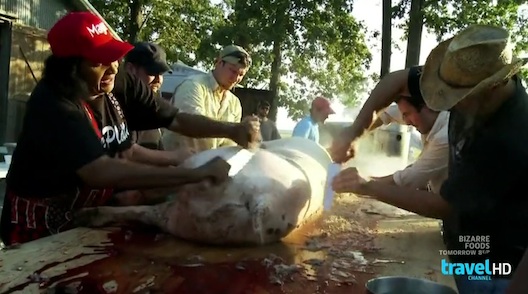 9) On a bunch of guys scraping the fur off a hog: "It's a weekend at the Kardashians!"
10) Again, on the de-furring of the pig: "Everyone gets to scraping off hair like Jersey housewives before hitting the beach."
11) On the fact that the mayor is at the boucherie: "Your elected representative should be able to do this prior to serving."
12) On the furless pig: "The pig is now smooth and hairless as a pole dancer's taint." 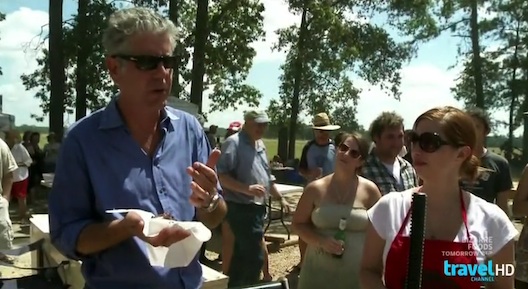 13) On his reputation: "People are treating me differently since I whacked the pig."
14) On a hog's head pie: "You do that on Top Chef, you win."
15) On the wonders of the boucherie: "With all the smells coming from six different directions, smoking and simmering and sizzling, you just want to, I don't know, touch yourself."
16) When someone else tries to be quotable: "I make the ass jokes around here, all right?"
17) Also, this tweet:

And now, since it's the season finale, some updates on next season from Bourdain's Twitter: first of all, shooting for the next season starts in September, and for locations, Bourdain says "Libya, Myanmar, Iran, Israel, Penang, the DR, Congo, Mozambique" are "all coming soon." Look for the next season in 2012. Also, his new Travel Channel show The Layover premieres November 21. (Here's a 15-second teaser clip.) Til next season, then.