Online wine sales are up, big time. VinQuest's 2011 wine industry research report shows online wine sales increased 38% in 2010. While there are many factors that have influenced the steady growth of online sales, the businesses born out of this climb — more specifically, flash sites like Lot18 and, as of last week, Gilt Taste Wine — are the real game changers.

What The Flash Site?
Though a flash site is simply a site that sells a limited product for a limited amount of time, sites like Wines 'Til Sold Out (see below) have created a negative connotation for the term by coming off like the internet version of a used car lot, with promises of percentage discounts and slashed prices in bold lettering. Many of this ilk are simply seen as dumping grounds for bottlings that wineries or distributors can't sell. What sets sites like Lot18 and Gilt apart from other wine flash sites is their decision to trade in the used car feel for expert quality control and more substance. 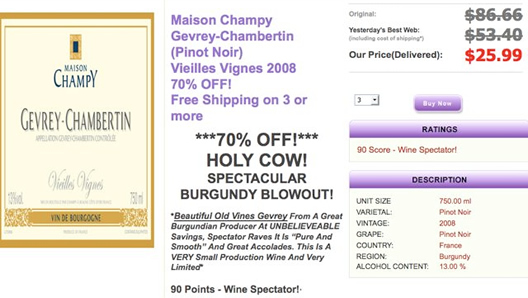 Lot18, for example, has branded itself as not only a site that offers wine directly from wineries at lower prices, but as a powerful branding platform for them. Right now they boast more than 300,000 members all acquired by invitation through partner sites, other members, and social media.

Gilt enters the dance floor with less of a focus on low prices and quick sales (though those will come), and more on culty, high-end wines that are hand selected by a group of experienced tasters, rather than a procurement team. That's not to say that Lot18 doesn't play with the more serious pirate's booty. They move collectible wines, but their sweet spot remains between $20-60 and, according to founder Philip James, "90% of the purchases made on Lot18 are for little-known wines that the customer hadn't heard of before we offered it to them."

Both are offering new ways to sell and, perhaps more importantly, market wine to a targeted group of buyers. The question is: who will win?

Game Face
They both have teams of professionals behind the wines and both are structured to act as middlemen in that they sell wines through the site, but do not ship directly to consumers. For the American wines, sales go through the winery direct to consumer, and in the case of imports, the wines go through an importation and distribution stream controlled by Lot18 or Gilt and shipped to consumers through retail partners in each state. (Prohibition residue be damned!)

What Lot18 currently has on Gilt Taste Wine are those 300,000 wine-loving members foaming at the mouth for the latest offer. Armed with this number, Lot18 is arguably one of the most powerful branding platforms, not only for a small winery with no distribution but also, as James points out, a brand like Ravenswood that needs to show that Joel Peterson makes more than just $10 Zinfandel.

"The next day you'll hear from a winery that they received 10 times more traffic to their website [after the sale]," says James.

This is gold to a small producer making around 2,000 cases with very few opportunities to reach a diverse national audience. In other words, at the moment, it's a lot easier for Lot18 to convince wineries to sell through their site. But if Gilt is right and people who will buy high-end handbags and white truffles will also buy wine, they're looking at an even larger base of buyers.

Advantage Gilt?
While Lot18 has a procurement team made up of wine folk like Ted Farthing and Ron Washam, Gilt has opted for a panel of sommeliers. Who exactly is procuring the wines (i.e. who has the connections and the access) is a tight-lipped matter, but a factor that is of the utmost importance if Gilt is going for the king.

Right now Gilt is offering wines "full-price," but according to their PR manager they'll soon be debuting "daily special wine sales ? and flash sales featuring limited-availability wines at exceptional price points." Sounds eerily familiar, but could look a lot different after it's put through the Gilt machine, which will likely go something like this: introduce panel-tested, artisanal products at lower prices (but not too low), so as to make the customer feel like they're getting a deal, but no so much that they feel like they're bargain-basement shopping. It's Gilt's ability to maintain a feeling of exclusivity and luxury while simultaneously providing a deal that makes it great. Add that psychological mastery to wine. Stir.

The second way Gilt Taste Wine can potentially trump Lot18 is via a higher quality product dialogue. They have a sophisticated editorial staff that can potentially package their offers in a way that's provocative and appealing without it sounding like a sales pitch — something that Lot18 often falls victim to despite how much context they strive to give the wines. Again, if Gilt can manage to let you know that you're getting deal without making it the selling point, they are ultimately capturing a more long-term, dedicated customer.

It's too early to call a clear winner, or even determine whether this is a fight. For now, we can simply consider the game changed and watch while the web finally becomes the new frontier for wine.