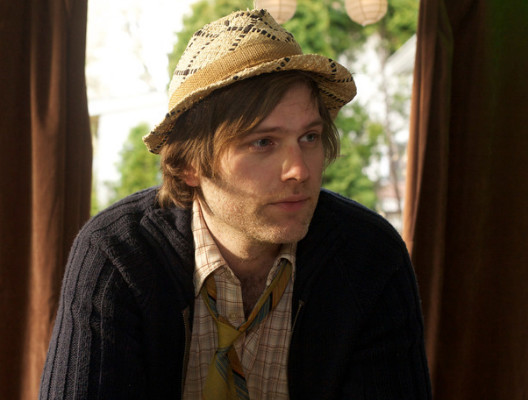 Today we talk to Eric D. Johnson, the frontman of Fruit Bats for the last ten years. During that time he's also performed with The Shins, Vetiver (whom we also interviewed a few weeks back), and Califone. His band's new album, Tripper, dropped yesterday and represents a departure from the folk-based sounds that dominated his previous records, as well as a newfound emphasis on story songs — everything from the tale of a young woman constrained by suburbia ("So Long"), a person's ill-fated return to nature ( the single "Tangie & Ray," which you can listen to below). Johnson recently did soundtrack work for the forthcoming Paul Rudd vehicle Our Idiot Brother.

I got a chance to talk to Johnson about his experiences working craft services when he wasn't yet a full-time musician, his favorite eats in Portland and across the U.S., and a most poetic barbecue memory.

What did you have for dinner last night?
Last night I was at a barbecue. Had a burger with bleu cheese, a couple of really delicious salads. It was a really beautiful day.

Where was it?
It was at Graham Gibson's house. He's the Fruit Bats' drummer.

What do you tend to eat?
I am highly omnivorous. I grew up eating very Midwestern, but as the years have gone on I've gotten more and more into food. I like everything from Taco Bell nachos to foie gras. But my favorite stuff is anything from southern Europe, the Middle East, and North Africa. Lots of Mediterranean stuff. Anything from Portuguese to, like, Israeli and Egyptian food.

What do you mean by "Midwestern"?
Meat and potatoes and casseroles. Maybe not even Midwestern. Maybe it's better to say "mid-century." It's food from Good Housekeeping recipes from like the 1950s and 1960s that were sort of handed down from my grandma's generation to my mom. For example, we got something from my grandma that was the church cookbook, which had recipes for porcupine meatballs, chicken casserole, and lots of creams. I would mow that down if it was in front of me, but it's not something I eat regularly anymore.

But things have changed. We cook mostly vegan at home, or at least super healthy. It finally got warm here in Portland, so last week I made a big batch of gazpacho. I like that stuff so much I'll make it in the winter.

How do you make yours?
I read an article about gazpacho that described how tomatoes weren't originally involved in the recipe. I don't know if that's because it was originally made before the arrival of the tomato in Europe or what it was exactly. So I never make it particularly tomato-heavy. I do half an onion, half a bell pepper, a fistful of celery, half of a cucumber, and basically any savory vegetable that's hanging around the house. And then stale bread, which was originally the main base of the recipe, and tons of olive oil. I blend until emulsified and serve with a garnish of avocado or something like that.

Would you say that you kind of know your shit?
Well, before I started playing in The Shins I did craft services on shoots as a day job. I did high-end craft service, so it wasn't just M&M's in a bowl. I would do gazpacho, Asian peanut salad, stuff like that. I was pretty involved and cooked all-day.

How'd you learn... the craft?
As I suggested, growing up it wasn't a very kitchen-y household. But when my parents got divorced, my mom gave me one day a week to cook when I was like nine. And I loved it! But I don't really know how I learned exactly. I learned the rhythm of the job by being on those sets, and I sort of had the cooking part down.

How about eats in Portland, where you are based?
Oh man, Portland is per capita maybe the best food city. I'm just starting to get into the food cart scene. I can tell you that Jesse Sandoval from The Shins has an awesome cart called Nuevo Mexico that does great New Mexican food. That's very northern cuisine, which I absolutely love. Just playing in that band, those guys were so knowledge able about it. Besides Louisiana, those people have the fiercest loyalty to their regional cuisine. I mean, it was a legitimate province of Mexico. The carne adovada, the cold-weather flour tortillas — comfort food for when you're at an altitude of 9,000 feet. You can't eat that stuff in a banana leaf.

They rock that stuff in Santa Fe.
That's really one of my favorite cities to eat in America. But in Portland, we've got some killer restaurants.

What are your favorites?
My favorite one if I'm going to spend a bit of dough is Olympic Provisions, which is a small plates place. I'm really into that, the variety. They have amazing charcuterie and a great wine list. And they actually have astoundingly good vegetarian options, which is great because my wife is a full-on vegetarian. But I will way eat meat there.

There's a really good Thai place called Pok Pok. When people come in from out of town, I take them there. They basically do Thai and some Vietnamese street food. It's basically Southeast Asian street food deep cuts. There's no pad thai or spring rolls. It's off the menu regional jams from that area. I kind of crave it all day. They have all kinds of really good stuff on the menu, but I had a special thing from there last week that is the best thing I have eaten all year.

What was it?
It was corn on the cob, grilled and charred, that they had marinated in coconut milk. Then they put coconut cream on it and a bit of sea salt. So the coconut replaced the butter or dairy component. I'm going to try to make it at home, despite the fact that the waiter said he had attempted it but couldn't pull it off.

How about eating elsewhere, on the road or during your travels?
I always try and think about the best meal I ever had, and I had this insane barbecue in Fort Stockton, Texas. We were driving on tour between Austin and probably Tucson, along Interstate 10. We were super hungry and about ready to have Taco Bell, when we saw this little joint. We went in there and there was this old dude putting chickens into this pit, with mesquite and stuff. It was a real "out there in Texas" kind of vibe; it didn't even have a name on it. There were beans with big jalapeños in them — all of it had a Mexican vibe. We were the only non-Mexicans in there. No one said anything for a while, but in the middle of the meal we all sort of did this little nod: "Oh yeah."

I was on tour a few years later with another band and we were about to do that drive and I suggested it. I talked about it the whole way, I told everyone not to eat too much before, and then we managed to find the place and it was shuttered. Totally boarded up, ghost town style. And part of me thinks, "Was this really the best meal I've ever had? Or was I just really hungry? What was it?" We will never know.

It adds a little something to the story. I can't go back and be disappointed now. But as far as Texas barbecue goes, the Salt Lick is something I basically think about daily.

Any last words?
We're a food band. We avoid fast food and have a restaurant we like to go to in basically every single town.

What are some of those places?
We definitely have a tradition of going to Jack's Barbecue in Nashville, which is super touristy. That's the best tourist strip in America. It's not amazing barbecue, but it's cool to eat there and then sit somewhere, have a Miller, and watch a killer band. It could be Emmylou Harris' band, but they're there at 3 in the afternoon just playing. That's our soundcheck ritual in Nashville.

I still love Canter's Deli in L.A., and even Katz's in New York and the Knishery on Houston.