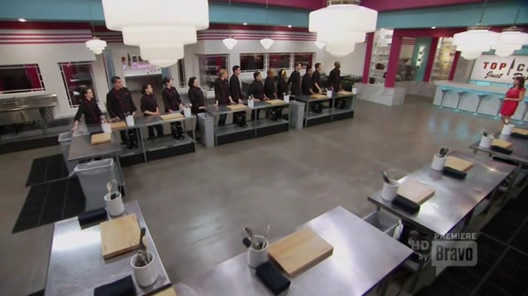 Up front full disclosure: Gail just talked about us on a recent episode of Food Network's The Best Thing I Ever Ate. We've always loved her and after meeting her and having her call us "your big gay uncle's ice cream truck" we love her even more.

Much time has passed since the last season, so a quick review of season one:

Duff Goldman was chopped in the first episode, Robert Irvine successfully completed his weekly challenge, Marco Canora made it all the way to Kitchen Stadium, but ultimately, Yigit, the one originally from Bel Ami Turkey, won. And to confirm that, we got to see Yigit kick things off from the driver's seat of a Buick: 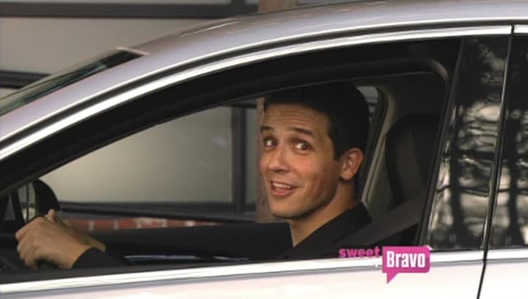 However, the most memorable thing from the last season wasn't the challenges or who won or even Gail's shoes, but a serious meltdown from one of the psychotestants that included the amazing line: "The red hots were for my mommy!" Jeezum Crow! We hope we get something as great as that this season!

But back to our season premiere: 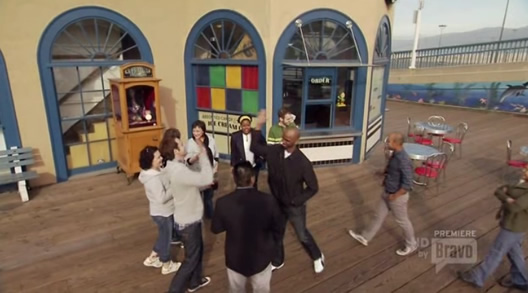 We're back in LA (not sure why) and out on a chilly pier for the meet and greet. Right away we're introduced to the egotestestants, and again, like every other competition, we really won't be able to tell them apart for another four episodes. Bravo's new way of introducing reality show casts — they start meeting up in the airport as they roll into town, or at the first challenge — is cute. I do miss the old way of newtestants first first meeting as they scramble for a bedroom spot. Let's bring that back, and step up the awkward factor by making them share beds! Why are we making the beginning of each series less awkward? That seems backwards to me.

But the bigger bangs come from Johnny and Gail: Johnny is rockin' a new, shorter ‘do and Gail is sporting a tight leather jacket. What's with Vanarin Kuch saying that Johnny's eyes "stare deep into his soul"? You're being recorded. Don't say things that are stalker-ish. Save it for Twitter:

The producers seem to be saying right from the start, "Screw the shoes," and to confirm that we get no discernible shots of Gail's gams throughout the entire episode (Although later at judge's table she's showing her shoulders in a black, slip cap-sleeve dress. Stalker much, boys?!). So for a bit of intermission, we offer this ode to shoes:

Everyone conveniently has a drink in their hand and we immediately thought they'd have to use their drinks in the Quickfire, but instead they have to update a soda fountain classic. This is a bit reminiscent of last season's sundae Quickfire. Honestly, we felt the results of that challenge were a bit of a let down, so hopefully we get better things from this one.... Which we don't.

Instead we get a lot of bananas. If we had big gay magic wands (HUBBA) we'd wave them and stop people from throwing bananas and/or peanut butter and/or bacon into something and calling it a KING, or a GRACELAND SPECIAL, or any other name that calls ELVIS into the picture. The "Elvis Has Left the Building and Entered the Kingdom of Heaven" or whatever it was called that appeared in the Quickfire nails the coffin shut. When Humphry Slocombe created the ice cream "ELVIS: THE FAT YEARS," Jake Godby not only got it right but insured that the next person who created an Elvis tribute would be jumping the shark.

Johnny's expression here pretty much sums up everyone's feeling on the subject here: 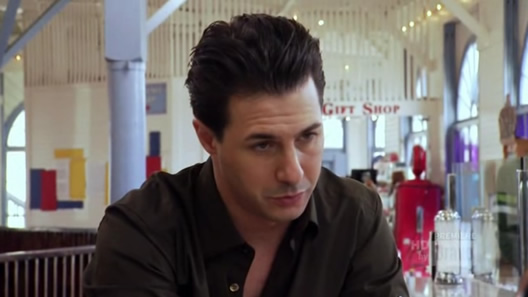 Along with bananas, we got a Cap'n Crunch shake and a chocolate egg cream – about which Johnny asks, "Is there anything else at the bottom of this?" What the hell is he looking for, we wonder? That damned baby that goes into a King Cake?

Digression: one problem we've always had with the Top Chef shows is the assumption we know whatever fancy word the teacherspetestants pull out of their asses hoping it'll boost their chances of winning. Word to the producers: no one watching this show uses words like feuilletine, île flottante, or bomboloni in their daily vernacular. Remember "Pop Up Video"? Please include something like that to give us a sense of what the hell people are making.

The Quickfire winners (Nelson "I'm gonna play up my accent when it helps a la Fabio" and Amanda "The one with the tattoo on her arm") were identifiable the moment Amanda said the words "pickled cherries" and received immunity. 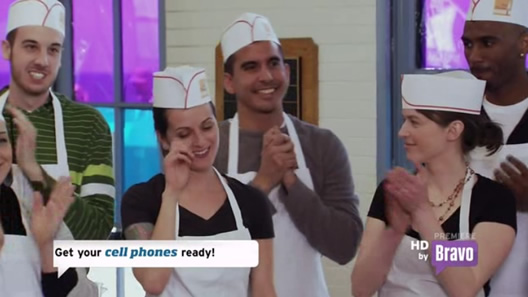 On to the Elimination Challenge. The Grimmtestants grouped up to create two desserts and one showpiece wrapped around one of four fairy tales. They served everything up at a sound stage costume party for 150. Oddly enough, this is the second time we've reviewed something involving Hansel & Gretel and food. 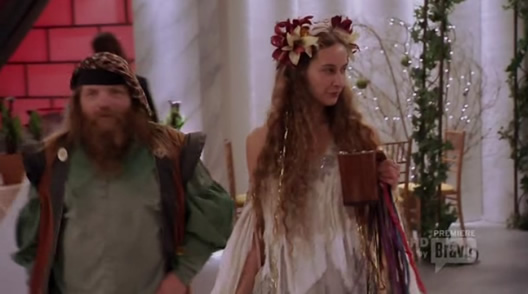 Once everyone came out in their costumes we realized where we had seen this before: Season one! They did this entire challenge last year with some freaky circus act. This time around however, we got all the weirdos that pulled out their Renaissance Fair best and none of the pan-sexual innuendos and fire eaters from last season's freaky (and oddly lame) Cirque spin-off troupe. 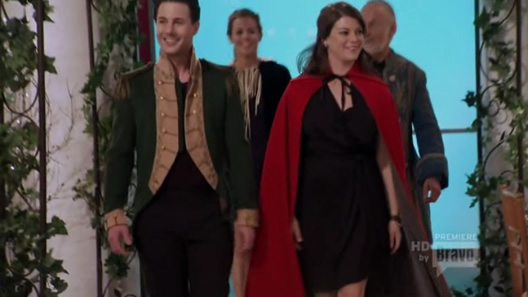 We were taken aback when, at the party, Prince and the Revolution walked out instead of the judges. (What, no dry ice entrance?!) Actually, Johnny was really more King of the Wild Frontier than Purple Paisley God. Hubert Keller offered up pearls of wisdom as Dumbledore. Gail was fetching in a Red Riding cape. And Judge Number 4 Dannielle Kyrillos did her best to ensure she left everyone with a "Bitch, please!" expression on their faces. 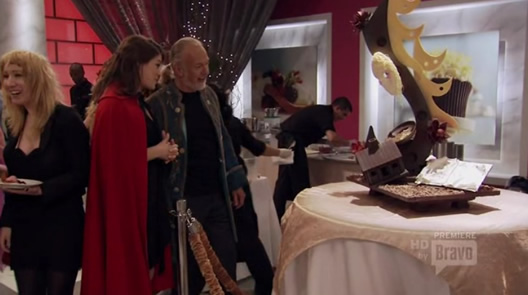 They liked the showpiece from Goldilocks, by self-proclaimed bitchtestant Orlando. But that's because it had Prince's Purple Rain harlequin mask on it. (Note to Orlando: you lost in the Quickfire and couldn't pull a win in the Elimination, so cut back on the "bitch in the kitchen" trash talk until you have a few wins under your belt.) 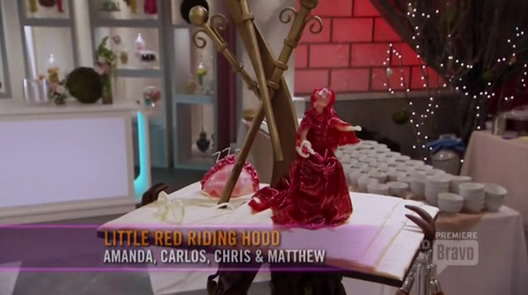 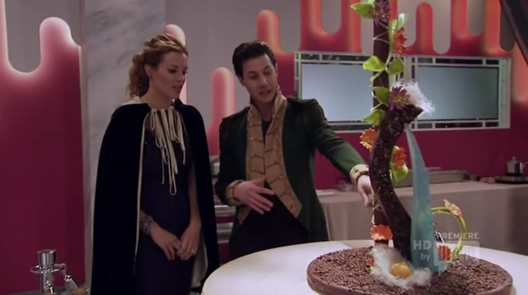 Katzie and Megan from Team Jack and the Beanstalk do their best to fix the disaster created by Craig ("self-proclaimed Harry Potter freak and apparently specifically cast to be booted in the first episode") and kept grabbing brown paper bags to stop from hyperventilating. Next time he should make a giant Xanax showpiece, because that's what we want him to take by the end of the episode. 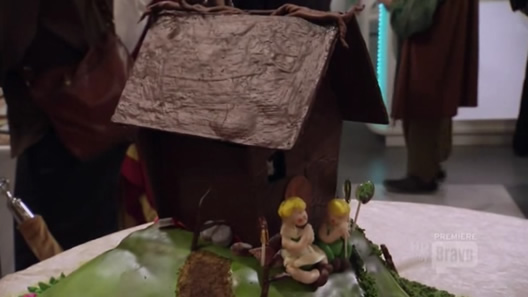 Team Hansel and Gretel presented a showpiece without a gingerbread/candy house by Lina ("I won best cupcake in Austin") that put them in the bottom. 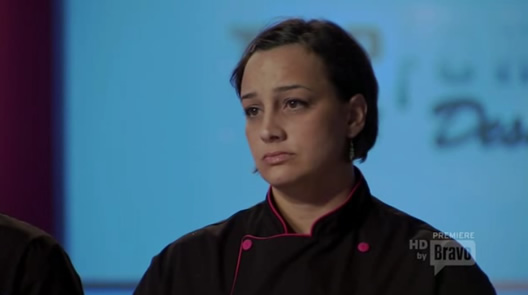 True to form, Melissa ("I'm gonna save all her opinions for Judges' Table and throw my fellow losertestants under the bus") threw Lina under the bus and the best little cupcakes in Texas was sent packing, leaving us Craig, the spaztestant, to return for next week's Harry Potter sequel. Dislike: Gail's refusal to adopt "take your whisk and beat it" (as suggest by one of our Twitter followers) as her "you're fired" line.

Everything had so many ingredients it all kind of freaked us out. Sage and pineapple evoke the Black Forest? Whatever happened to the days of "that's too much shit on a plate"? It makes us pine for the simplicity of toast and butter. Bam! Two ingredients combined that we could eat forever. Hey, Chloe Sevigny, will you teach these overachievertestants a thing or two about toast? Why sure, boys, here: