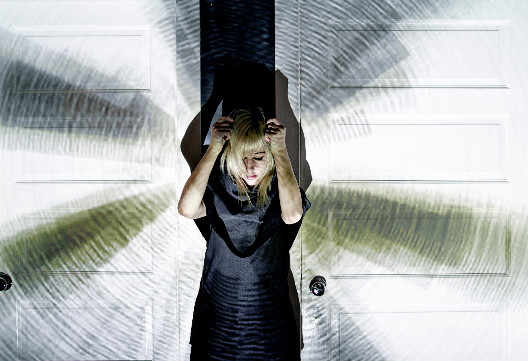 A couple of weeks ago we came upon a post on Stereogum about a certain Zola Jesus. In it the singer Nika Roza Danilova, 21, was described as "part industrial rave nymph and proto-goth queen... The pop star of the future — a sonically adventurous, multi-instrumentalist songwriter with a voice big enough to knock down buildings and a deep-rooted need to blow people's minds."

With the release of her third record Conatus just around the corner (listen to the single "Vessel" here), we got a chance to talk to the L.A.-based songstress about what she likes to eat. Turns out she's obsessed with Animal, prefers chocolate to drugs on the road, and is sympathetic to those that kill what they end up eating.

Where did you grow up? What did you like to eat?
I lived in Wisconsin growing up. There were fish fries every Friday in the basement of a church. Other than the normal fare, I ate a lot of borscht, the Russian soup. I also had a lot of venison because my dad was a deer hunter. He'd bring a lot of meat, but mostly venison, because he would kill deer a lot. After he was done killing it, he would strip it down, hang it, and then skin it. Then they'd take the meat, put it in a grinder and make venison sausage or burgers. Or you could just take the meat and prepare it as you would any other protein.

Did you hunt at all?
I never did because I was too young. But I'm not opposed to the idea of it, considering the survivalist aspect of hunting. It's ingrained in our species to provide for ourselves and our families.

What do you like to eat now?
I didn't have much seafood when I was growing up, since we didn't live near a body of water except for a couple of small lakes that would have bass or trout in them. Now I'm getting much more into fish and sushi and some exotic stuff.

Where do you get your sushi?
I like to go to Robata Jinya on 3rd for sushi.

What about other places?
My favorite restaurant is BLD on Beverly. I just love it. Their breakfast is so good — I go there every week. Sometimes I'll get eggs florentine, sometimes an egg sandwich, sometimes a crepe, sometimes ricotta pancakes.

I love Animal, which is right near my house. It's funny because it's always really interesting meat dishes and unconventional stuff — parts of animals you don't usually eat, like tongue or belly. The plates are small, which is good, since I'm a small eater. Anthony Gonzalez of M83 and I bond over how much we like Animal. They have a new restaurant called Son of a Gun, which is like the fish version of Animal. I've been trying to get a reservation there, but it's impossible.

Do you cook at home? If so, what do you make?
Kind of, sometimes, not really. Yeah, I do. We're part of this program — the CSA — and every week my husband and I get vegetables and fruit grown from farms around L.A. So we try to make a meal out of it. We've been getting a lot of zucchini, so we make zucchini bread every week. I made a soup with parsnips recently that was really, really good. It's exciting to have different produce every week, especially when most of the time it's stuff you can't get at the grocery store. Lots of hybrid vegetables. It's kind of a guessing game, though. Once we thought we had gotten a certain vegetable and made a casserole with it, and it turned out that was definitely not the ingredient we thought it was.

Was it any good?
It turned out to be absolutely disgusting. Beets.

What about eating on the road?
On the road it's hard. I become tempted by chocolate a lot more, as a way of dealing with being away.

What kind of chocolate?
The most base chocolate. There is this chocolate from Sweden that's their version of a Kit Kat. It's called a Kex bar. My bandmate and I love Kit Kat, so every time we go to a new country we try to find their version of it. The Kex was so good! It was more wafery than the American one, and thicker.

But are there any places that are staples for you while traveling?
One of the few reasons I like to go to Detroit is to go to Slows. The pulled pork is the best I have ever had. They are the kings.

Voodoo Donut in Portland is always a place I have to go to. I'm an emotional eater, so I try to find places on the road to go back to again and again, since they feel like home. It makes me feel comfortable.

There was a dim sum restaurant in Montreal, a traditional dim sum house. I don't remember the name but I remember feeling like that was the real deal. We were the only white people there, which made me feel more comfortable. We knew we were going to get something good.

Do you pay attention to the music that certain restaurants play?
It's funny, because especially in L.A. and especially in West Hollywood, where I live, they mostly play acid jazz — really smooth lounge jazz. And it's just stock elevator music that they think is really hip. It's so prefab and it kind of distracts me and makes me feel a little uneasy. Sometimes I'll go to a restaurant and they'll be playing that fun, happy, AT&T commercial indie rock, and it's just like, "Oh, god." Music can help, but sometimes they're inserting something that doesn't fit the experience.

I do remember going to a café in Minneapolis called Hard Time and they were playing the band Fear. That was really cool. That felt right.

Any last words?
Like I said, I'm a hugely emotional eater, so food is my comfort. Sometimes I don't even know what I'm putting in my body.

Kind of like a drug?
It is, absolutely. I'm not the kind of person that plays a show and gets wasted. Instead of "where's the coke?" it's mostly "where's the chocolate?"

A Teaser for Conatus