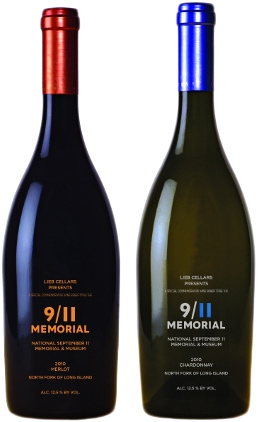 Here's some super classy September 11 memorial wine from Long Island's Lieb Cellars that's made with grapes grown "90 miles from the site of the World Trade Center." It's even priced at $19.11 a bottle, should you buy it directly from the winery. According to the Lieb Cellars website, "the concept emerged at harvest just days after the September 11 disaster." That seems awfully fast.

Before you get all twitchy about it, though, a general manager of the winery told the LA Times that "6-10%" of proceeds to the National September 11 Memorial and Museum. They've already "probably donated $25,000" to the September Mission foundation from sales of a cheaper wine they introduced in 2004. So it's tasteless for a good cause?

Makes no difference to No Reservations host Anthony Bourdain, who was livid that New York restaurant Les Halles Downtown (where he holds the title "chef-at-large") sells the stuff: "911Wine?!!? Are you out your fucking MIND?!! EPIC FAIL." Later he tweeted that it'll be taken off the menu: "Just heard back from owner of LH . It's not sold on Park. But if at John St., it's gone today."

Bourdain's not the only one that's outraged: As one objector tweeted, "What's next a 9/11-themed McRib sandwich made with beef from Pennsylvania cows raised near the Flight 93 Memorial Park?"