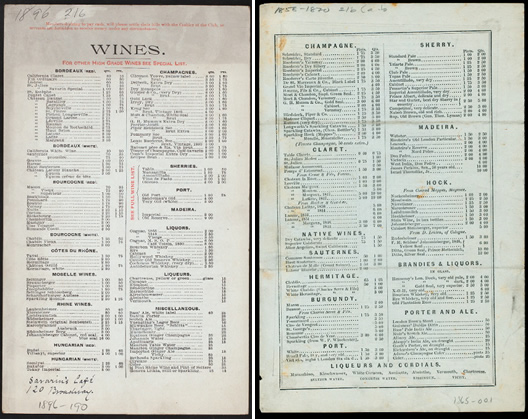 Wine lists can be great peepholes into a period of time and its wine trends. Today we see more variation in vision than ever before, but if you pore over enough wine lists you'll be able to easily identify trends and fashion a flyby vision of what it's like to drink wine in 2011. But what about drinking wine in Boston in 1865?

Several months ago, a friend—sommelier and blogger Levi Dalton—emailed around a collection of old American wine lists. Most of these lists hail from right around 1900 and offer a rare look at this country's wine habits pre-Prohibition. They document well the evolution of wine regions—from the classification of Bordeaux in 1855 and the rising prices of top-shelf Burgundy — and, in many cases, can tell us more about wine history than perhaps any other preserved piece of 8 ½ by 11 paper out there.

So, thanks to Levi, today I'll take a look at two wine lists—one from the famous Parker House in Boston from 1865 and another from Savarin's Café in New York from 1896—to find out what these lists can tell us about pre-1900 dining. 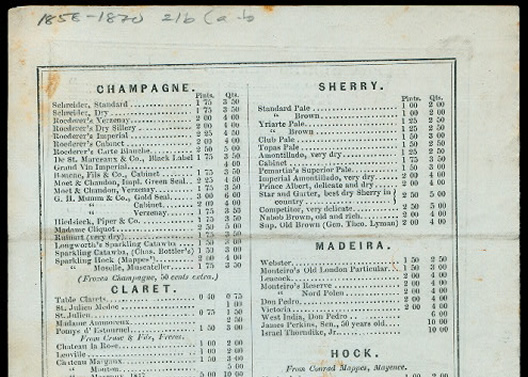 The Parker House, founded in 1855, is the oldest continuously operating hotel in the United States. During its heydays in the mid to late 1800s it was one of the finest French restaurants in the country and hosted a variety of characters from John Wilkes Booth to Ulysses S. Grant. In fact, the wine list below was the one that Wilkes would have ordered from on April 5th and 6th, 1865, when he stayed at the Parker House just 8 days before he assassinated President Abraham Lincoln.

During this time the Burgundy sections were famously vague, often omitting producer or vineyard. This is likely because by this time there was only an unofficial classification of Burgundy vineyards (published by Lavalle in 1855) and it seems that only the top vineyard sites are written into the wine list. Regardless of the fact that no vintage is listed, though, it would be a bad idea to spring for a pint of Clos de Vougeot, at $5.00 a pop.

Also of note is the large selection of Sherry and Madeira, which remain fixtures on wine lists through the early 1900s. But here they not only own more real estate than they do on later wine lists, but the most expensive offerings on the list are two Madeiras (one called "James Perkins, Sen. 50 years old" and another "Israel Thorndike, Jr."), both offered at $10.00 a pint. At the time these were often named for the sailor/merchant who brought the wine in.

Lastly, a rare section of Hermitage, a few native wines, including Nicholas Longworth's famous Sparkling Catawba, and a section of "hock" wines — a catchall category for any wine of German origin. Later this category becomes more specific. 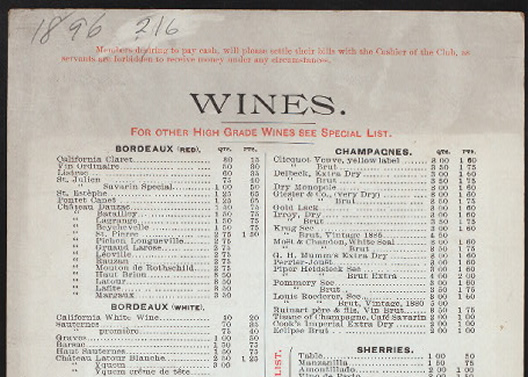 Savarin’s was located in what is now called the Equitable Building at 120 Broadway between Broadway and Nassau. The restaurant existed until 1912 when a fire destroyed much of the building and claimed the lives of several Savarin's employees.

By 1896 we begin to see far greater attention paid to producer and place. Here Veuve Clicquot is listed as both Yellow Label and Brut, and vintage Champagne begins to pop up (here 1886 Krug and 1890 Roederer are offered at $4.50 and $3.00 a quart, respectively).

Bordeaux listed with greater attention to producer and the collection of Châteaux offered extends beyond the First Growths to include the likes of Beychevelle and Pichon Longueville. Prices are noticeably up on the big boys like Margaux — now at $8.50 a quart, up from $6.00 at the Parker House.

Here you will also find a few listings for Graves Blanc, Barsac, and Sauternes (including d’Yquem at $3.00 per quart, no vintage listed).

Top Burgundy is now be fetching the same prices as top Bordeaux with Romanee Conti going for $8.50 a quart and Clos de Vougeot at $8.00, up from $5.00 at the Parker House.

Bordeaux and Champagne still dominate at this time, but there's a a growing array of new wines listed including Beaujolais, California Claret, Tavel, Hermitage Blanc, and C?te R?tie that act as evidence of a growing market.