The elBulli Episode of No Reservations: Just the One-Liners

Share All sharing options for: The elBulli Episode of No Reservations: Just the One-Liners

Anthony Bourdain promised this elBulli episode of No Reservations would make "fucking history," and the meal certainly appears to be mind-blowing (Bourdain's jaw actually drops wide open at one point). Said Bourdain in a recent interview: "I think they will be remembered, and Ferran in particular, of course, as leaders, thinkers, pioneers, chefs, and revolutionary figures."

Below, all kinds of Spanish food and many, many high fives. Now, on to the Quotable Bourdain (and, making a guest appearance, the Quotable Andrés) — feel free to add your picks in the comments below.

1) Bourdain on his preconceptions of elBulli the first time he ate there: "I like being wrong about things."
2) Bourdain on the traditions of Spanish cuisine: "Wherever you are in Spain, wherever you come from, life begins — and often ends — with jamon." 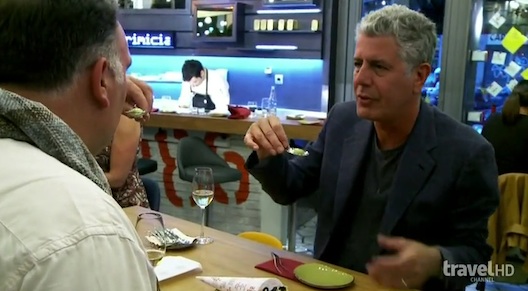 3) In which Andrés sets Bourdain up for the easiest joke ever, in reference to spherical olives: "It's the closest thing to an explosion in your mouth you'll ever experience." Bourdain: "Not since camp. Oh!"
4) Bourdain on tomato tartare: "Don't tell the vegetarians about the because it's fucking awesome."
5) A vocabulary lesson from Anthony Bourdain: "What does 'finesse' translate to? It translates into giving a shit." 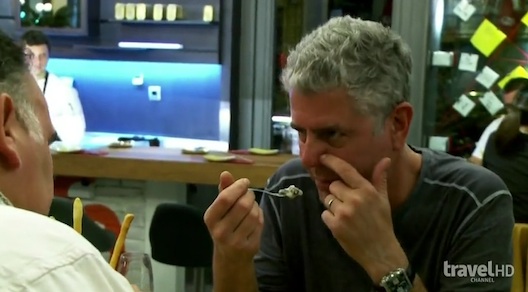 6) Bourdain on a cheese dish at Tickets: "I'm going to snort this right up my fucking nose into my brain." Andrés: "It's legal. You can sniff cheese and morels."
7) Bourdain after Andrés calls some prawns "M.F.s": "Motherfuckers? Is that what you mean? We can say that on this show." Andrés: "I have a green card, I have to behave."
8) Bourdain on molecular gastronomy: "If you're not going to say it, I'll say it: the majority of the time, they're cooking to show you how smart they are and how pretty they can make a plate." 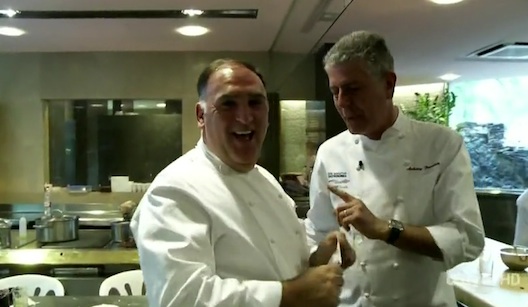 9) Prior to Bourdain's stint in the elBulli kitchens, Bourdain: "You see the look on my face? This is called pure terror my friend." Andrés: "I'm going to tweet about it!" Bourdain: "Ugh."
10) Ferran Adrià to Bourdain after his shift: "Fantastic. You are the only person in history — no, no, I'm telling you, never before has anyone done so well."
11) Bourdain on a black truffle riff on Pomme Anna: "No human being deserves this. I certainly don't." 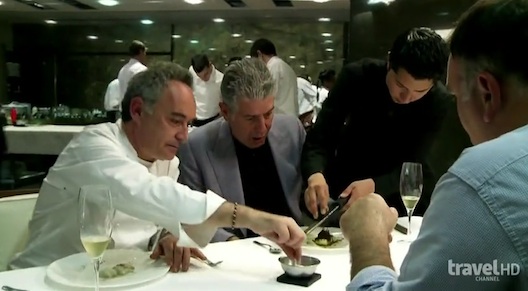 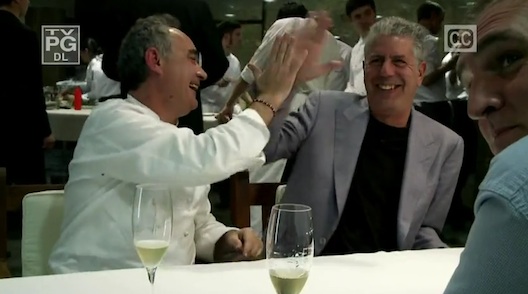 14) José Andrés on elBulli's legacy: "Many young people like me - we came to elBulli without a spirit, and we left with a soul. That's what [Adria] has done?"