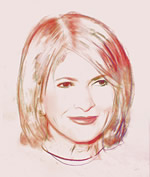 Don't miss this epic 5,400-word story on Martha Stewart from New York magazine. Titled "The Comeback That Wasn't," it's got everything: money troubles ("MSLO has been profitable in only one of the past eight years" and had to "renegotiate its debt with Bank of America"); high executive churn ("You can't imagine that a company with a brand that's so big could keep functioning with so much dysfunction"); people crying at the magazine ("That women's bathroom... there are women in there crying literally all day long"); and allegations that Stewart has nine personal assistants (though the company called that last bit "highly exaggerated"). [NYMag]