A Look at Mission Street Food's Photo and Recipe Design

Share All sharing options for: A Look at Mission Street Food's Photo and Recipe Design

Here's Behind the Cookbook, a new series on Eater that looks at what goes into making a cookbook. Here now, part two in a five-part series on the first cookbook from McSweeney's food imprint, Mission Street Food by Anthony Myint and Karen Leibowitz (buy at Amazon). Warning: serious cookbook nerdery ahead.

Last week, Behind the Cookbook talked to Mission Street Food authors Anthony Myint and Karen Leibowitz; this week, editor/published Chris Ying and photographer Alanna Hale discuss their theories behind the photography and recipe layout in the cookbook. Bonus: they also sent us the full contact sheet (above) for the Rare Beef Tostada recipe (the final version of which you can see below).

For the recipes in the Mission Street Food cookbook, [authors] Karen [Leibowitz], Anthony [Myint], and I really wanted to try for a distinct design template. It was the first book in the McSweeney's Insatiables imprint, and I felt obligated to make something a little idiosyncratic, a little novel. And A&K are constantly pushing themselves (and me) to rethink the way things are normally done. 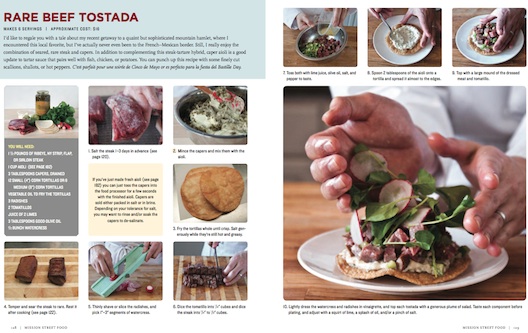 As was the case with almost everything Mission Street Food ever did, resources dictated our path. We couldn't afford a food stylist or a professional lighting set-up, but we had Anthony's ridiculous work ethic and a really talented photographer named Alanna Hale who would work for cheap. We decided on a photo-by-photo, step-by-step layout that I'd been fantasizing about since McSweeney's first decided to produce cookbooks.

For each and every recipe, Anthony would take time off from busing tables at Mission Chinese Food or helping out at Commonwealth, and reproduce the Mission Street Food recipes to the letter. I haven't been making cookbooks for very long, but I have a hunch that not a lot of other chefs are testing all the recipes in their own books, and including photographs of themselves doing the prep, cooking, and plating of each dish.

And for good reason. The process was painstaking. Alanna shot a few hundred photos for each recipe, using her own well-lit kitchen as the studio, or the dining room at Commonwealth when it was available. I'd pop in to eat the results every now and then, but the two of them really ran the show. Later on in layout, if there was a step that we'd missed, or something we wanted to add, Alanna and Anthony would go right back in the kitchen and shoot it without any grumbling whatsoever. Their willingness was shocking.

When they were staging the final-dish shot of the "French Toast Crunch" — bruléed pieces of pain de mie resting in condensed milk — I casually suggested we fill a huge bowl with a few dozen pieces of the toast and craft an oversized Cinnamon Toast Crunch cereal box for the background. Anthony immediately went out to source enormous bowls.* (This didn't work out).

Anyway, I'm proud of the way the recipes look. I think they have a usefulness that a single finished-dish photo and a long explanation can't quite match. I think they're pretty to look at. I think we'll probably have to come up with an easier way to design recipes next time around.

*Super Mario Bros. 3, World 4 was our reference point, in case you were wondering:

I first met Anthony at a dinner Chris Ying put together at a Szechuan restaurant in San Francisco. Ying had promised an "ill-advised adventure" involving tongue-numbing peppercorns and I knew I had to go, although I had no idea who else would be there. Anthony and I ended up sitting at the same table but didn't talk too much, though I was aware of Mission Street Food and curious to overhear his brief and mumbled thoughts about it. Karen wasn't there, and I didn't meet her until a few months later. A friend who worked at Mission Street Food invited me to their joint birthday party, luring me with promises of miracle fruit (a small red berry that temporarily rewires the palate to make everything taste sweet). Again, I felt some adventurous foodsome-ness was drawing us together.

Eventually the same friend who had invited me to the party got me a job hostessing at MSF on Saturday nights. I hadn't worked in a restaurant in more than a decade. But I was excited about food, and the ideas and creativity coming out this little, dumpy, hole-in-the-wall space. I welcomed the opportunity to meet different chefs every week, to taste their food, to feel good about what we were doing, and to make a little bit of money while doing it. After a few months, when murmurs started about closing down MSF, I knew I had to document it.

I was less interested in the line out the door or the bustle of the dining room than the Chinese restaurant's chef sleeping on an upside-down soy-sauce bucket in the kitchen, the shiny vat of mayonnaise stored at room temperature, and the surprising sincerity and gravity with which Anthony and the staff took the food and their jobs at the line-up of every shift. I spent the last six weeks of MSF with my camera, taking shots in between wiping down tables and swigging beer. The first day I came in with a camera, Ying was helping out on the cold line, and we talked casually and briefly about how important these photos would be if we ever made a book. And then Ying, Anthony, and Karen decided to make a book.

Photographing the rest of the book was an incredible challenge — both a great difficulty and wildly rewarding.

We shot tens of thousands of pictures. Before starting, we didn't have a clear idea of how the design was going to look or feel or a clear definition of who our audience might be. The only point we agreed upon before starting was using a step-by-step format. When Anthony and I were on our own, we grappled with how inclusive to be: do we show how to dice an onion? Or do we start with a cup of diced onions already in the shot?

We were told, I think, "Shoot everything." So we did. We shot things in both portrait and landscape. We shot close-ups and pulled back to include the environment. The final plated dish shots were pretty collaborative. Anthony makes beautiful food, which made things easier, but I was coming from a documentary and portrait background and found shooting food surprisingly difficult. We used props from around our homes, from Mission Chinese and Commonwealth, or I'd run across the street to Salvation Army for some different flatware or plates. Meanwhile Anthony would get ingredients together for the next recipe. I maxed out my hard drive. I ended up buying a new computer. We got to know each other better. We improved.