Share All sharing options for: Paula Deen Bites Back at Anthony Bourdain 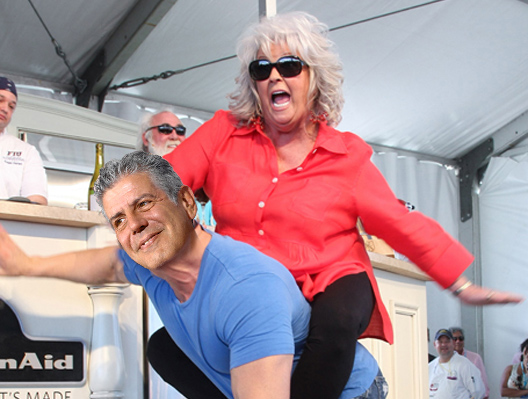 Well, this was bound to happen eventually: Paula Deen is calling out Anthony Bourdain on Page Six for saying nasty things about her and other Food Network stars. Bourdain recently gave an interview to TV Guide in which he called Deen the "most dangerous person in America." He later took the hate party over to Twitter, where he continued ranting against Deen, although he did call her a "nice lady."

Nice no more. The fed-up Deen thinks Bourdain "needs to get a life":

"You don't have to like my food, or Rachael's, Sandra's and Guy's. But it’s another thing to attack our character. I wake up every morning happy for where I am in life. It’s not all about the cooking, but the fact that I can contribute by using my influence to help people all over the country. In the last two years, my partners and I have fed more than 10 million hungry people by bringing meat to food banks."

She also got on him for not being charitable. That's not entirely true.

Giving nods to Rachael Ray, Guy Fieri and Sandra Lee's charitable giving, Deen said "I have no idea what Anthony has done to contribute besides being irritable." The man may be irritable, but he does get involved.

On No Reservations, Bourdain has used his celebrity to charitable ends, most notably when the website for Haitian relief organization JP/HRO crashed after he encouraged viewers to donate on air. He has participated in events benefiting DC Central Kitchen and Doctors Without Borders. Also, there was that time he arm wrestled a lady in the Ozarks for charity. See? Not just irritable.