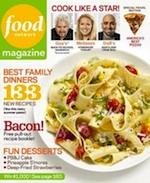 Things are looking rosy over at Food Network Magazine, which recently raised its circulation rate base — the number of copies the magazine tells potential advertisers they're guaranteed to sell — from 1.3 million to 1.4 million. That puts them in the running with Bon Appetit, whose rate base is 1.5 million copies, and Every Day with Rachael Ray, at 1.7 million. [Crains]