Yuki of Asobi Seksu Is Tired of Putting Sriracha on Everything

Share All sharing options for: Yuki of Asobi Seksu Is Tired of Putting Sriracha on Everything 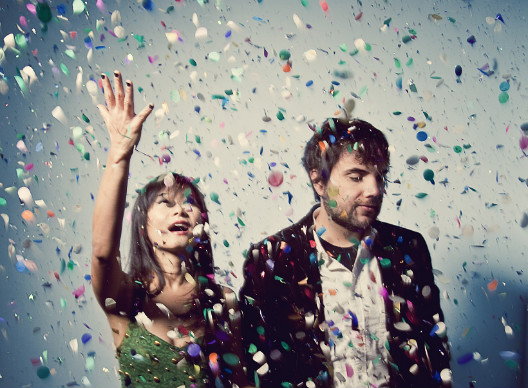 Asobi Seksu haven't been called Sportfuck in a decade, but lead singer Yuki Chikudate sure does use the second syllable of that word with some frequency when describing the foods she loves. As the band gears up for a tour in support of Fluorescence, their new album, I got a chance to talk to Chikudate about the Japanese food she ate growing up, the stuff she makes at home, and the mind-blowing things she's encountered abroad.

Don't forget to get a taste of their dream pop samplings, after the words.

You were born in Okinawa, so I'm going to go ahead and ask about Japanese food first.
I grew up loving Japanese comfort food, like curry over rice, chicken cutlets, yakisoba, gyoza. My dad is a really good cook — not a chef — but he made a lot of that stuff for us when we were growing up.

Where do you go in the rare cases?
I do love going to Sunrise Market, which reminds me of L.A.

Have you been to Angel's Share, which is right there?
Oh my god, I love Angel's Share. The drinks are fucking delicious.

Where else?
I love SobaKoh, which is cool because it's across the street from Tropicalia In Furs, the record shop that has lots of French and Brazilian stuff that I cry about not being able to afford.

What about other places, not necessarily Japanese?
I do like to go to a place that is kind of overpriced, but delicious in Greenpoint. I'm forgetting the name. Before they opened I think Heath Ledger was a partner. I think I need to ask James.

[walks out of the room, goes to ask James]

Five Leaves! And of course, when I asked James, he said, "Fuck that place." I mean, it is a place to be seen.

What do you get there?
I've had really delicious grilled octopus there. I like all of their fish dishes — good trout and seabass. They're known for their hamburgers and steak but I haven't had any of that.

Now I remember that I tried Ippudo and was a bit disappointed. I don't understand the super-expensive ramen trend that's happening in New York.

Did you have to wait?
I did have to wait. It was about an hour and a half. It was in the winter, when everyone is craving ramen. It was good, but I mean, it's ramen. I'm Japanese and grew up with it. I love it, and a good bowl of it really does warm the soul, but come on. I've never been to Momofuku, because it's expensive. I did like Setagaya when it was open. It was the best decent ramen you could get for less than ten bucks.

And what about at home? What do you make?
I tend to eat mostly vegan food, even though I am not a vegan. I eat a lot of seitan, brown rice, veggies, quinoa. Pretty boring, but I try to make it interesting by using different sauces. I got really tired of putting sriracha on everything. Now that it's summer, I love making soba salad.

How do you make it?
I put seaweed, corn, cucumber, and avocado. Sometimes I'll put in some yamaimo, mountain potato. It's like peasant food. I remember being a kid and loving it, but when I'd go to Japan my cousins would make fun of me and say, "Why do you like this country bumpkin shit? What is wrong with you? Who is giving this to you?" but my dad grew up eating that and introduced it to us. You can chop it and it's crunchy — sort of the texture of an Asian pear — but it has an okra-like gooeyness. But if you touch it, there's an allergen that can make you break out into hives. So be really careful when you eat it. It's not for everyone, as is also the case with natto.

I like natto.
That's very rare. I don't think anyone would like to have a bowl of natto by itself. I grew up eating that for breakfast, and when we went to Taiwan on tour, I convinced the drummer that was with us to try a little bit. He got really cocky and said, "Dude. I've got this. I'm going to show you I will love it." He put a huge mound of it in his rice bowl and proceeded to shovel it into his mouth. The face he made was priceless. I warned him...

Now that you've mentioned an experience abroad, what are some memorable meals you've had on the road?
There is nothing exciting that happens in the US for me. If I get to eat something with a fork and it's warm, I'm pretty fucking happy. We got to go to Indonesia, Singapore, Taiwan, and Hong Kong on tour. I was a little disappointed by the food in Hong Kong, but the food in Taiwan is just out of this world — so flavorful and so light. There's a Japanese influence there and there's Chinese done in a way that only they can do.

What did you eat in Taiwan?
They do a delicious, delicious dumpling. Oh my god. There's this place called Din Tai Fung in Taipei. There's one in a very fancy, Japanese-style shopping mall which has a full-floor of just food — an endless sea of colorful, beautifully-presented food and lots of high-end restaurants, as well. That was the first time I had Din Tai Fung. I died and went to heaven. The sweet dumplings with red bean paste are so good. They also have a flagship store in Arcadia, which is right near where I grew up. Man, Asian food in L.A. is so good.

Where do you go there?
I used to go to a super-Asian place called Life Plaza, which is now closed. There used to be a Vietnamese spot for pho. That was the first time I had tripe. Turns out I couldn't hang with the tripe [laughs].

Any last words?
Being in a band, I feel so lucky that I get to see the world that way and experience different cultures through cuisine. Like when I went to Singapore, I had never had chicken over rice. The promoter said we just had to. He took us to his favorite spot and also brought us to the outdoor market there, where you sit at a table and people just come around and show you plates of food and you point at stuff.

The point is: it's a great way to be exposed to food and taste people's favorite foods. Food is the best way to come together with people, the best social activity I can think of.