Share All sharing options for: Heston Blumenthal Leaves His Wife For Cookbook Temptress

According to the Daily Mail, British chef Heston Blumenthal has left his wife for the American cookbook author Suzanne Pirret. Blumenthal, the chef at The Fat Duck (three Michelin stars and ranked #5 in the world) and the recently-opened Dinner at the Mandarin Oriental hotel in London, had been married to his wife Zanna for twenty years. A spokesperson for the Blumenthals confirmed to the Daily Mail that "their marriage is over." Apparently Pirret lives in London, and she and Blumenthal are dating.

Pirret is an interesting character: She's an American. The bio in her cookbook says that she is a graduate of the American Repertory Theater Institute at Harvard, that she's an "award-winning voice-over artist" (having recorded "hundreds of voice-overs and commercials in New York, London, and Paris"), and "a graduate of the Cordon Bleu, beginning in Paris and and ending in London." She has also claims to have worked for Jamie Oliver as a pastry chef at his restaurant Fifteen in London. Some might also call her a homewrecker now, too. 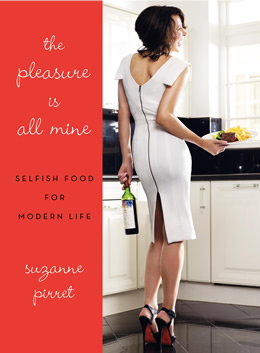 She is also a cookbook author — see her 2009 The Pleasure Is All Mine: Selfish Food for Modern Life that includes advice on dinner guests, how to get a reservation, and modern etiquette. The back cover has a quote from Bobby Flay: "I couldn't put this book down! Everyone will be begging to be a guest or even a dishwasher in Suzanne Pirret's kitchen after reading and cooking from The Pleasure Is All Mine. She's infectious!" It is a "bargain book" on Amazon

Many pages on her website have recently been taken down, but her blog is still up. Word is that there's probably more news about this to come out this weekend.

Approximately four years ago, Blumenthal spoke to Woman & Home magazine about his wife: "Zanna is the reason for my success because she has supported me every step of the way. She’s sacrificed so much and has never complained. We’ve had our rocky patches, but the thought of splitting up has never crossed my mind. When I took my marriage vows, I meant them with all my heart. I love Zanna’s energy, her patience and her beauty, and can’t imagine life without her.”


Here's some video of Pirret:


Video: Trailer to The Pleasure Is All Mine


Video: Some of Her Voice-Over Work