Share All sharing options for: Girls' Chet White on Food's Influence on Music 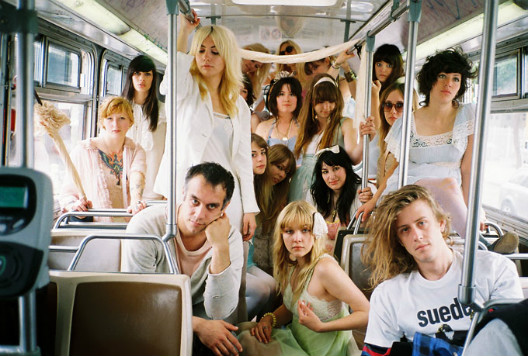 San Francisco band Girls — whose first record got a whopping 9.1 on Pitchfork — will release their second full-length album, "Father, Son, Holy Ghost" on September 13. As you can imagine, the indie folk await with bated breath, tided over by the six-minute single "Vomit," whose musical peaks and acid gospel hint at great new things.

I had a chance to talk to one-half of the band, Chet JR White, about his relationship with food. Turns out he grew up working through the hardest recipes in his mom's cookbooks and spent several years working on the west coast at places like Zuni Café. He still dreams of opening up his own spot. Read on for the full story:

They tell me you were a chef. How did that start?
Yeah, for like seven years. I started out learning from my mom and dad, who were teachers. They had the summers off and we'd travel extensively, especially between when I was nine and fifteen. That was how it started, being introduced to and becoming aware of food that was interesting and different. Well, in some cases the product was the same but it tasted differently: butter in France that didn't taste like the butter I usually had at home, having green tomatoes on a salad, things like that. My family was there for the art, but the food was what I was really drawn to during those trips. I needed "my thing."

What about actually learning the craft?
My mom is an amazing cook, who has cooked from the farmers market as far back as I can remember. She was doing it when very few people made that a habit. It used to be like four booths in Santa Cruz. It all came from that. For like three hours every day after school, when no one was home, I'd go through my mom's Joy of Cooking and work my way through whatever recipes had the highest difficulty rating.

I didn't want to be a musician originally. I loved the idea of rock and roll and tried to do it, playing the politics and all that, but I didn't enjoy it. So I sort of kept the music thing in my life by going to school for recording engineering in San Francisco. I had brought all my gear and I was ready to hit the big city. But it turns out no one wanted to record with me. After about a year I was struggling to pay the rent and I realized I needed to subsidize this someway. I basically started looking on Craigslist for kitchen jobs – I had always wanted to work in a kitchen, but since I had never done it, I was kind of afraid.

Where did you land first?
I took a job as a catering chef, because it seemed like the easiest way to fake my way into the business. I had also helped my mom when she occasionally catered friends' events. I did the catering for like three years, and by the end of it I was managing the kitchen and the production side, and I began to realize that I was better at this than a good amount of people. But it wasn't interesting to me.

My family would always go to Zuni Café when I was a kid, so I had an attachment to that place. It was the only place we would go that had a Caesar salad as good as or better than my mom's. I went into the restaurant, told them that, and they really appreciated it, so I aced the interview. I also lied and told them that I had experience working the line. Turns out they put me on the wood fire grill the first week, which is arguably the most difficult station there. I struggled for a few days, but I loved it.

Did they know you had lied?
I kind of think so. You know, Chez Panisse and those kinds of places are rooted in the idea of hiring personalities and people that can bring something interesting to the table.

How was the experience at Zuni?
First, before I forget, I should say that I also had a side job working the Wattis Room, a little dining room for the big name San Francisco families that donate to the Symphony. It was pretty much a fine dining thing. And the chef there Karen Passero was really the one who introduced me to that idea of focusing on ingredients and simplicity, which she was really steeped in during the 80s. It was very California.

I worked at Zuni for two years, during which Judy [Rodgers] was there almost every day. It was impressive. We had started recording the first Girls record about a year in, and at that point I didn't go out with the crew or anything. I just went to the rehearsal space, recording until about 7AM. You can imagine that that routine can be really exhausting, so I wasn't as focused on work in that last year. I mean, I had to sneak out of the kitchen during the day to take calls from labels. My work started suffering. In the end, they took a lot of shit from me.

But it was an inspiring experience. As is pretty much the case with all art forms, there are so many parallels between music and cooking. Realizing it was really helpful.

What are the parallels?
There's one story that Judy used to always tell that stuck with me. It was about the use of things like parsley, capers – finishing touches, you could say. She used to say that the people who developed Raisin Bran invested millions and millions of dollars so that there would be the perfect amount of raisins in the cereal. And she had a lot of friends who would add raisins to it, which is just ridiculous. You don't want an overwhelming amount of raisins, because it takes away the pleasant effect of what would have been the less frequent bites with raisins.

She used to liken that to cooking. If you have a couscous and want to put salt-cured olives in it, you don't want an overwhelming amount of the olives so that the bites that do have olive say something. If you're going to put parsley in it, chop it big so they can taste it. Maintain the excitement.

How would you say that relates to music?
Listen to "Strangeways, Here We Come" by The Smiths — I'm not crazy into them like some people are, but still. When I listen to Johnny Marr, an amazing guitarist, I also notice in the arrangements and the recordings he's not playing guitar the whole time. Or, if there's a lead guitar part, the rhythm part goes away sometimes. It's about distributing things within the mix so that every element maintains its powerful effect. Withholding and creating space are the keys.

What food do you eat in San Francisco, where you're based?
I like to eat food when I know the person who is cooking it, so I go to restaurants where I have an existing relationship with the chef. And I'll be pretty faithful. I also love to talk and get to know people who work at a place, so you can learn the story and really appreciate the experience.

I recently became friends with Danny Bowien from Mission Chinese Food. I can't eat there all the time because it's so rich and strong, but I go often. He borrows from a lot of restaurants I've been to, like Xi'An in New York and stuff. He takes from other people and makes it his own, like many chefs do.

Actually, I eat a lot of ethnic and cheap food. I'd always complain to friends in San Francisco when they'd say "Let's go out for Thai," because I went to L.A. so frequently, and the Thai food was so much better there. But then I found Lers Ros on Larkin Street when we were recording, which is just excellent. I dragged everyone there every night.

I have a soft spot for Tu Lan, since my first recording studio was in the basement of that place. It was an interesting way to live. They fed me, and I know everyone in there.

Chris Kronner who left Bar Tartine was a good friend of mine. His food is always inspiring.

I grew up with Morgan Mueller, who is Traci des Jardins' executive chef. He's the first person I ever played music with, and now he's been working for her forever. Eating there is a pretty great experience.

What about on the road or in your travels?
On the road it's really about making sacrifices and making sure everyone is happy. There'll be lots of moments in bands when you'll pass by a McDonald's and people will get so pumped, much to my chagrin. There's times where I'll take off on my own and try to find something. There's a book called Road Food which I used for a couple of years during U.S. tours that would be really helpful in finding regional places, like some Midwestern fish fry [laughs].

But the memorable meals are usually when someone cooks for us or I cook for the band. When we were in Dublin, I found a fish market that had some really good Scottish salmon. We had a kitchen in the hotel, so I poached salmon in a yogurt sauce with some dill, and that was really good. Really simple. People don't always know – actually, I think most do – what it means when someone cooks for you. It's an amazing thing. I've actually been cooking all morning, since I'm staying with my sister in Los Angeles.

What are you making?
I went through her pantry and went to the Mexican market nearby. Ended up making white bean soup for her.

It's probably hard to assess yourself, but since you've shared all of this and you obviously still cook, I want to ask how good you think you got working in those kitchens?
When I left Zuni, I don't think I was where I wanted to be. Zuni was my first real line job, and I was able to work packed services on the grill. When you're a line cook, it's not about composing a dish or being creative. It's about following directions and executing consistently. There's no question I also had a lot of huge breakthroughs mentally there. Cooking is this sort of pirate's life filled with badasses and all that, but if you're smart and have a personality, you can get to the right places. But if I really think about it, I was about a year abroad and another year of line cooking away from maybe opening my own place.

Do you still think about doing that?
I still would love to have my own place, even though the failure rate is very high. Whatever it would be, it wouldn't be fine dining. It would be rustic, simple, the kind of stuff I've made my whole life.