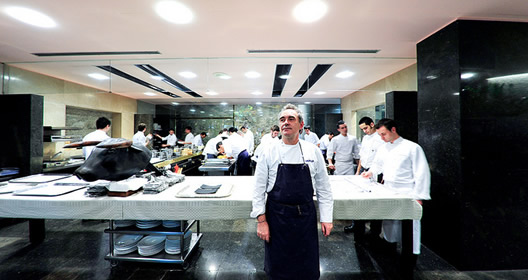 Well, it's happening. Ferran Adrià's restaurant elBulli has its last dinner service tomorrow night. Fear not, for Adrià's elBulliFoundation is coming in 2014 (and perhaps even in Sweden, Peru, and China, too). There's been a lot of coverage the past few months, mainly in the "I Ate at elBulli" genre or profiles and interviews of Adrià. The past week has seen a flurry of stories, if perhaps less than one might have expected for what's been often called "the best restaurant in the world." This is certainly not the last you'll hear about the restaurant — there are documentaries and cookbooks and movies in the works — but here now, all in one place, recent elBulligeddon media frenzy:

· Anthony Bourdain's No Reservations elBulli episode airs this coming Monday (it will be epic), and in a blog post today he puts the restaurant in the context of how his partnership with production company Zero Point Zero began: "It was Ferran, who, truth be told, became the impetus for our show, now in its 7th year... . I do know that our producers and camera people and editors and post production people went all out–did their very best work. This show was a labor of love and much gratitude." [Travel Channel]

· Today the Ulterior Epicure put up a detailed review of an early July meal at elBulli, writing, "Maybe – just maybe – Adria doesn't want his flavors to have much dimension. Maybe he purposefully makes them caricatures of themselves – exaggerated, distilled, unmistakable." Don't miss the full menu and annotations. [Ulterior Epicure] 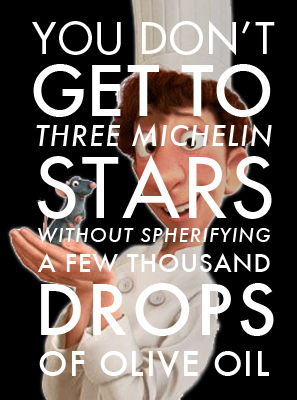 · Richard Ehrlich is a little cynical over at the Guardian's Word of Mouth Blog, writing: "El Bulli clearly is (or was) an amazing place... But come on folks, we are talking about a type of cooking that is available to perhaps 0.1% of the world's restaurants... Moreover, when El Bulli methods pass into the wrong hands, we're in trouble." [Guardian]

· Grub Street NY talks to chef George Mendes about his experience staging at elBulli and asks if Adria ever yelled at him: "He was very clear and precise, but I never heard him scream. His presence alone, and the intensity of being in his kitchen — it’s enough. No one works well when you tell them they’re a piece of shit all day." [GSNY]

· John Walsh at the Independent: "As announcements go, it was like David Bowie telling his fans in 1973, at the end of the Aladdin Sane tour, that his career was at an end. It was like Garbo explaining, after Two-Faced Woman, that she wanted to be left alone, but permanently. To food lovers everywhere it was akin to the announcing of the Crack of Doom." [Independent]

· Spain's ABC offers a look at the restaurant's unlikely genesis, focusing on the German couple who bought the property — almost by mistake — and gradually paved the way for what it has become. [ABC]

· The AFP talks to a bunch of French chefs including Michel Guerard, Gerald Passedat, and Pierre Herme, who said, "There is no need to start being nostalgic... He is sure to invent something new to surprise us." [AFP]

· Alinea/Next chef and elBulli alum Grant Achatz posted this sweet video in which his friends and staff shared their thoughts on elBulli and the impact of Ferran Adrià. [YouTube]