Welcome to Ask Dave Arnold, a regular feature in which David Arnold, director of technology at the French Culinary Institute, provides in-depth answers to questions on food science, cooking technique, and other issues. Two weeks ago, we published the first round of questions from Le Bernardin executive pastry chef Michael Laiskonis. Today, Dave wraps things up by answering the second round of questions from the pastry giant. Enjoy. 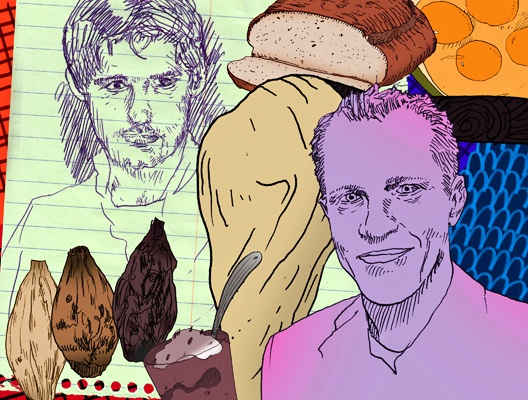 Question One: One of my favorite bits I've seen you speak on is the egg yolk "bread" made in a pressure cooker. My memory is a little fuzzy: it was a happy accident, yes? What was the procedure? If I recall, the resulting dish that it inspired involved three or four different preparations of "eggs," yes?

Dave Arnold: Pressured cooked eggs turn a nice golden brown due to Maillard reactions that are accelerated by the alkalinity of egg whites. The yolks of pressure cooked eggs take on a fantastic chicken giblet aroma and flavor. I was trying to recreate that effect by cooking the yolks by themselves and was failing miserably. I figured maybe I needed some alkalinity in the yolks to get the reaction going, so I told my intern Ed to put some baking soda into the yolks. He mis-heard and used baking powder instead.

The result was almost pure egg-yolk that cooked into something with the texture of bread (although it still didn't have the giblet aroma I wanted). We call it egg-bread. If I believed in the Atkins diet I'd sell the stuff for hamburger buns. It was indeed a happy accident, because when I made Ed try the recipe again with baking soda I thought I wanted, the result was horrible. We had a further happy accident when a chef at the school made the recipe in a regular steamer instead of a pressure cooker by mistake, and it worked as well — or better — than the pressure cooker technique.

We use 4.5 grams of baking powder to 6 large egg yolks. Add a pinch of salt. I like to add some sugar as well (if you add enough sugar to make the yolks taste sweet you get a good French toast base). You can also add soy. Lightly beat the yolks and other ingredients, put them in ramekins and steam them for about 30 minutes.

My former partner in crime Nils Noren and I started using the egg bread in dishes we called egg on egg, then egg on egg on egg. Finally, we just started naming the dishes things like "egg to the fifth." Our most egged out was: egg bread (1) soaked in a French toast mixture (2) and sautéed, covered with pressure cooked egg white (3), covered in hollandaise (4) and topped with caviar (5).

Question Two: I've long been fascinated by the process of malting grains, and the dual processes in play — both enzymatic starch conversion and the Maillard reaction. I'd love to one day play around with it on my own, but I wouldn't know exactly where to start in terms of what grains to select and if equipment normally found in the kitchen would be adequate. I don't even have a final project in mind, but the flavors are so alluring, and I figure it can't be too difficult given that beer-making has always been a fairly low-tech pursuit.

Dave Arnold: Malted grains are grains that have been germinated and dried. Germination develops enzymes that break starch into sugar. After malting, grains are very coarsely ground and steeped in warm-to-hot water in a process called mashing, during which the enzymes created during malting will convert the large majority of starch in the grain into sugar — mainly maltose. Maltose is a disaccharide made of two glucose molecules (cause starch ain't nothing but a long chain of glucose units). After the malted grains have been mashed, they can be fermented into beer, which can then be distilled into whiskey. That mash can also be reduced to an extract, or even more conveniently, dried to a powder known as dry malt extract (DME). You can buy both of those products at homebrew shops, and they are delicious. Try putting some dry malt extract into your next batch of mashed potatoes –trust me. If you buy malt from a bakery supply, you'll be given a choice between diastatic malt and non-diastatic malt. Diastatic malt still has enzymes that you can put to work. It is added to bread dough to convert some starch to sugar and help feed the yeast. Non-diastatic malt is a flavoring powder, which I recommend buying from a home-brew shop because you'll have a wide variety of flavors to choose from. See here.

Although I too love malted grain, and am a former home-brewer, I have never made my own malt. When my second son was born I could no longer justify the dedicated home-brew space in my NYC apartment. Back then there weren't many home brewers making their own malt. Now I see many people are doing their own malting, and I kinda wish I was one of them.

Grains are composed mainly of starch — a durable, stable energy storage medium to nourish new plants as they grow. When the grains start to germinate, they produce enzymes that are capable of breaking that starch into sugars to fuel growth (the main enzyme groups are alpha and beta amylases). If you let a grain germinate too long, the growing plant actually starts to consume the starch by turning it into sugar and using it to grow. The trick of malting is, therefore, to get grains to produce a lot of enzymes, but not let them grow so long that they eat up starch. You also need to avoid problems like letting the grains get moldy.

1. After harvesting, grains are dried to a moisture content of around 12% and stored for at least six weeks (if you cheat on this step they won't germinate properly).

2. Grains are soaked in cool water –usually for 2 days or more, depending on the size of the grain, till they are about 45 percent water. During this time you have to change the water so the grains don't get too funky, and turn them over a bit to mix them up and keep things even.

3. Next, the grains need to germinate. This is the hard part. You have to spread the grains in a thick layer and keep them humid so they don't dry out, but well aerated and turned so they don't overheat, grow mold, or clump together because of the growing roots. What you are looking for is the growth of a shoot inside the grain – this growth is known as an acrospire. The length of the acrospires will tell you when to stop the germinating process. If you stop too early, not enough enzyme will have been produced to convert your starch. If you stop too late, you will have lost some starch to the growing plant. For barley, you want the acrospire to be at least ¾ the length of the grain, but not longer than the grain itself.

4. Now the grain needs to be dried so that the germination stops. This process is called kilning in the biz. Pale malts are kilned at low temperatures (in the 120's, I'd guess). You could use a dehydrator if you wanted to. You want the grains to get really dry. This type of low-temperature kilning maintains the activity of the enzymes. Alternatively, you can kiln at high temperatures. High temperatures produce the great toasty Maillard reactions we associate with darker malts. The flip side to those awesome tastes is that the higher the temperature, and the longer you kiln it, the more enzymes you destroy. Really dark malts have no enzyme activity whatsoever. After kilning, the roots are knocked off the bottom of the grains.

What grains to use:

If someone just says malt, they almost always mean barley. Barley is great for malting because it produces a lot of enzymes and its husk makes filtering your mash simple. It also tastes great. Any grain, however, can be malted. Chicha de Jora is a corn beer made from malted corn (see here). When malting corn, however, you let the acrospire grow longer than you would for barley –till it is two to three times as long as the grain. The reason: corn doesn't have the enzyme power of barley and needs to be germinated longer (at the expense of losing some starch).

And for more answers to your cooking issues, tune into Dave Arnold every Tuesday at noon on the Heritage Radio Network