Share All sharing options for: Ryan Kattner of Supergroup Mister Heavenly on Gutbombs 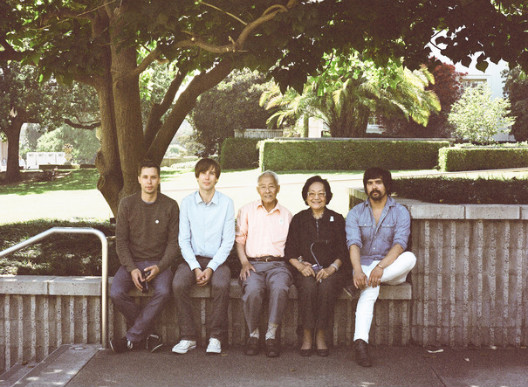 Ryan Kattner (aka Honus Honus) is probably best-known as the lead singer of Man Man. But recently, as you may know, he's had a new thing going on: Mister Heavenly. Dubbed by Pitchfork as an "indie super group," the band is composed of Kattner, Nick Thorburn (Islands), and Joe Plummer (Modest Mouse).

The outfit has already done a bit of touring, but their formal, full-length record debut, Out of Love, drops August 16 — right around the corner. In advance of the release, I had a chance to talk to Kattner about his adventurous eating habits, which range from heavy Philly classics to pig roasts to Kangaroo burritos to whiskey-marinated steaks.

Ready to talk about food?
I've done my research. Still not exactly sure I'm qualified.

Let's just get going.
I am an adventurous eater. It's pretty diverse. I have no dietary restrictions. If it has a face, I will eat it. Well, it doesn't have to have a face. I will still eat it.

What did you eat growing up?
I was an Air Force brat. I moved around a lot. I used to eat a lot of crazy food and was exposed to a lot of stuff. I remember eating snails when I was in second or third grade, in France.

Did you like it?
Yeah, it was awesome. I used to like blood pudding a lot when I was a kid. I remember having a pig roast for my first communion. We dug out the ground where the hammock used to hang between the trees and we roasted the full thing. It was awesome. Occasionally my mom will still get full pigs for the holidays.

You're based in Philly, right? Tell me about what you like to eat there these days.
I am a nomad, but I am in Philly at the moment. Man Man, my other band, is definitely Philly-based.

There's a lot of crazy options here. I do like vegetarian food. Like yesterday, I drove out of my way to go to this mini-market in West Philly called Fu-Wah because they have really great tofu banh mi. There's also a place called Café Nauy which also has amazing banh mi.

I made a record once around the corner from this place called Jose's Grocery. I think it's just called Jose's now — the "Grocery" was probably just so they could get their license. Amazing shrimp burrito with tequila-marinated shrimp. Because I'm sensing a theme here, I should say that I actually don't like all my food dipped in alcohol.

I also love John's Water Ice. They have cherry water ice with vanilla gelato, kind of layered. They give it to you in a little dixie cup. It is no surprise that years ago Philly was voted one of the fattest cities in America. I mean, the city invented cheese fries. And I wouldn't be surprised if they also invented track pants.

There are two hoagie shops that are also very much worth mentioning. There's Sarcone's, right off the Italian market. It's this family-owned deli and also a bakery, where they sell bread and tomato pies. I used to live right around the corner, which was very unhealthy. I really could only get this sandwich once a month, because it would just knock me down. It was called the "The Booch."

That's pretty brilliant.
Yeah, named after one of the owners. It was a long seeded roll made from their deli, with roast beef, sharp provolone, asparagus, and balsamaic vinaigreete.

Doesn't sound that devastating.
But wait, then there's the real gutbomb. The kind of sandwich where you wake up in an abandoned car and you don't even know why. Get this, it's beef brisket, roasted tomatoes, some pepperincino, sharp provolone, horseradish mayo...topped with a fried egg.

OK, that is a gutbomb.
Yeah, dude. GAME OVER. Whenever I've gone there, the clientele is like 99 per cent guys on their lunch breaks, like blue collar guys. I do not know how the fuck these dudes eat these sandwiches and then get up on a roof to do roofing or do electrical wiring. I can't imagine doing anything other than basically dying.

I have to ask about cheesesteaks.
This may be sacrilegious, and I sense that there will be a bunch of guys looking like Popeye knocking at my door yelling,"YOU'RE CRAZY!" But there's this place called Govinda's Gourmet To Go, and they make this vegetarian chicken cheesesteak with real cheese and some steak sauce. It's just out of this world.

What about high-end places?
Sometimes. The Stephen Starr restaurants like Morimoto. But I tend to just get great neighborhood food.

Especially sandwiches.
In Philly, yes, but on the road I end up eating lots of Thai food. I really like hot food. If I had to pick the food I like to eat the most, it's probably green chicken curry that's so hot my eyes boil.

Tell me more about eating on the road.
It's difficult because there's always been a vegetarian or vegan in the bands I've been in. When you're on tour, you need to be really careful about rolling the dice. It can haunt you riding in a van with other people. For me, when it comes to eating on tour, I have to give myself about four hours between when I eat and when I play. If it's any less, I have to wait till afterwards.

What happens if you don't wait?
I vomit.

The other two guys in Mister Heavenly are vegetarians. I'm the odd man out. I don't let it faze me. That's their problem. We did a record last year in Omaha with Man Man, and I was on the quest to find the perfect steak.

Did you?
I did. It was amazing. Marinated in bourbon. The place was called Dinker's. Kind of an old man bar. Whiskey-soaked steak I could have cut with a butter knife it was so tender. I mean, I maybe added ten pounds of steak weight while staying in Omaha for three months.

What else can you talk about as far as road food?
Without exaggeration, I know that last year, in that one year of touring, I ate more pizza than I have in my entire life. I love pizza, but it's so bad for you. I eat salads as well. I'm not a fat carnivore, I swear. I do the Thai food, lots of beets, and Whole Foods, because it can kind of meet everyone's needs on tour.

I guess I totally just lied to you, because I just remembered that I love a sandwich place in Portland, Bunk Bar. You know it's good taste when the only thing on the wall is an enormous mural of Harry Dean Stanton from "Paris, Texas." They have an amazing pork belly sandwich there. That's the jam.

What about restaurants — in any city — that play particularly good or bad music?
I have this weird thing, maybe it's a skill. I kind of don't hear music in restaurants. Unless it's god-awful, terrible. I can kind of zone out sound. I could be eating in a nice restaurant and there could be someone outside jackhammering, and the noise just doesn't register with me.

Any last words?
I ate kangaroo in Australia. It was made in a burrito. I also had a steak-cut. It was gamey in a good way.

You'd eat it again?
Yeah, but not too much, because I like kangaroos.

Listen to (or download) the killer single "Bronx Sniper":